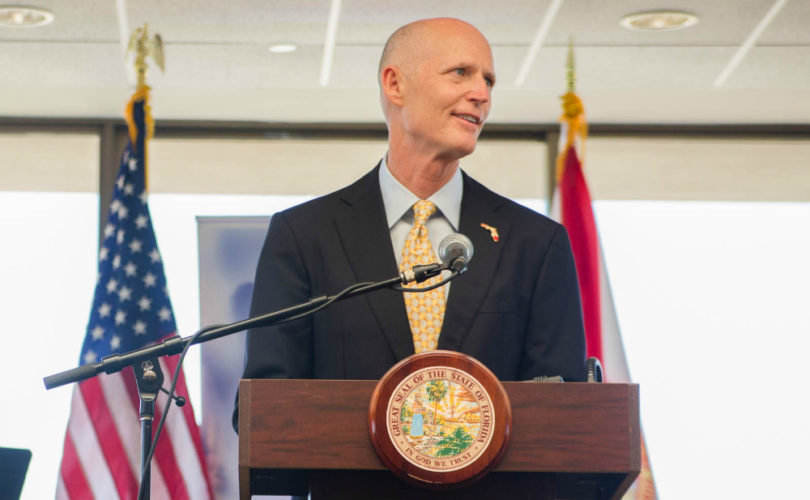 TALLAHASSEE, FL, June 11, 2015 (LifeSiteNews) – No sooner had the ink dried on a bill that would give women in Florida time to consider their decision before having an abortion than the abortion industry sued to block the law.

If it prevails in court, Florida will become the 27th state to require a waiting period. Late last night, Gov. Rick Scott signed H.B. 633, which requires an abortionist to provide women with accurate information about the abortion in person 24 hours before performing an abortion.

The bill lifts the 24-hour waiting period in the cases of rape, incest, intimate partner violence, or human trafficking, but only if the woman produces documentation of the fact, such as a police report or restraining order. It is scheduled to take effect on July 1.

“Florida mandates waits of three days before getting a marriage license, 20 days before divorce, and three days before buying a handgun. Rarely is any surgery done the same day as the consultation,” wrote Jim Styer, the president of Sarasota-Manatee Right to Life. “So, why not a short wait before an abortion, certainly an irreversible decision?”

One of the bill's supporters said he had a very personal stake in its passage. State Sen. Don Gaetz, R-Niceville, said his wife, Victoria, nearly had an abortion three decades ago. They now have a 29-year-old daughter named Erin.

“I’m glad she had 24 hours to think about it,” Sen. Gaetz said during debates in April.

Nonetheless, the American Civil Liberties Union of Florida and the Center for Reproductive Rights, which is based in New York, filed a lawsuit today in Leon County Circuit Court, saying the bill violates a woman's “right to privacy.”

“It’s clear that the sole purpose of this law is to make it more difficult for a woman who has decided to have an abortion to get one, and to punish and discriminate against those who do,” said Renée Paradis, senior staff attorney for the ACLU. “Furthermore, it’s flat-out offensive.”

Autumn Katz, staff attorney at the Center for Reproductive Rights, said, “We are confident this demeaning measure will be struck down as a blatant violation of the state’s strong constitutional protections for women’s rights.”

Lois Backus, the executive director of the Philadelphia-based Medical Students for Choice – which is also part of the lawsuit – said the law made it “impossible” for abortionists to provide “care” for their patients. She also worried the pro-life law threatened future generations. “If allowed to go forward, this law will make it more difficult for women in Florida to obtain the quality health care they deserve for generations to come,” Backus said.

Rep. Jennifer Sullivan, R-Mount Dora, who sponsored the bill, said, “I am confident precedent will be respected, and I look forward to seeing this effort to protect life and a women's health become the law of Florida.”