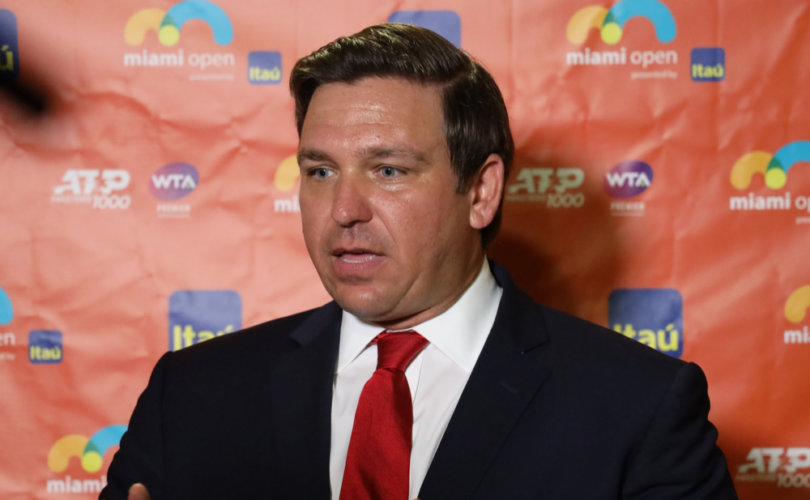 TALLAHASSEE, Florida (LifeSiteNews) — Florida’s Republican-dominated legislature advanced a bill Wednesday which would ban almost all abortions in the state after 15 weeks gestation. The bill mirrors a similar law in Mississippi which is the subject of the much-anticipated Dobbs v. Jackson Women’s Health Organization case currently on the docket of the U.S. Supreme Court.

A committee of Florida’s House of Representatives advanced the measure, HB 5, on January 19 with a party-line 12-6 vote, giving the bill its first legislative go-ahead. The proposed legislation will now face two more committees in the House. A companion bill, SB 146, has been filed in the Senate.

Florida’s Republican Gov. Ron DeSantis, who is up for re-election this year and potentially a strong contender for the U.S. presidency in 2024, has already signaled he will support legislation limiting abortion in the Sunshine State.

Earlier this month, DeSantis told reporters “there’s a lot of pro-life legislation” in the works in the Florida legislature, and that “we’re going to be welcoming it.”

Asked specifically about a ban on abortions after 15 weeks, DeSantis said such a measure “makes a lot of sense.”

“I think if you look at what’s been done in some of these other states — I mean, when you start talking about 15 weeks where you have really serious pain and heartbeats and all this stuff — having protections I think is something that makes a lot of sense,” the Catholic governor said.

Florida’s proposed pro-life legislation would sharply reduce the window for legal abortion in the state from its current limit at 24 weeks gestation.

According to legislative analysis reports, however, the ban would not have a large impact on decreasing actual abortion rates: Most abortions committed in Florida were performed at 12 weeks gestation or less.

While HB 5 does not allow abortions in cases of rape or incest, it would permit killing the baby to save the life of the mother, to “avert a serious risk of substantial and irreversible physical impairment to the mother,” or if the unborn child has “a terminal condition that, in reasonable medical judgment, regardless of the provision of life-saving medical treatment, is incompatible with life outside the womb and will result in death upon birth or imminently thereafter” as certified by two physicians.

Many pro-life advocates argue that there is never a circumstance in which abortion is medically necessary.

Every baby deserves the opportunity to live! Proud to work with Chair @ErinGrall on #HB5 to champion for both the born and unborn. pic.twitter.com/sUkP6OcnK3

The 15-week abortion ban is just one pro-life bill to be introduced, and could be topped by a future measure that does more to protect the unborn.

In addition to HB 5, Florida’s legislature had previously introduced a heartbeat bill similar to one passed into law in Texas last year.

Such a law would prohibit abortion after a baby’s heartbeat can be detected, usually around six weeks gestation. Introduced by Republican Rep. Webster Barnaby, HB 167 underwent its first reading on January 11. To date, however, no companion bill has appeared in the Senate, throwing doubt upon the success of the measure.

Pro-abortion advocates have argued that since many women don’t even know they’re pregnant at six weeks, a heartbeat bill essentially is an outright ban on abortion, a fact which has not escaped the notice of pro-life proponents seeking to legally prohibit most abortions.

The success of much pro-life legislation, including Florida’s proposals, could hinge upon the U.S. Supreme Court.

Last year the Supreme Court agreed to hear Dobbs v. Jackson, which will determine whether individual states have the right to implement limits on abortion. In response, a slew of states including Florida and Texas moved to enact restrictions on abortion in anticipation of the Court’s decision.

A finding favorable to Mississippi could result in the overturning of Roe v. Wade, the controversial 1973 ruling which found a “constitutional right to abortion,” legalizing the practice throughout all 50 states. Many believe the Court is in a strategic position to strike down Roe v. Wade this year thanks to former President Donald Trump’s conservative judicial appointees.