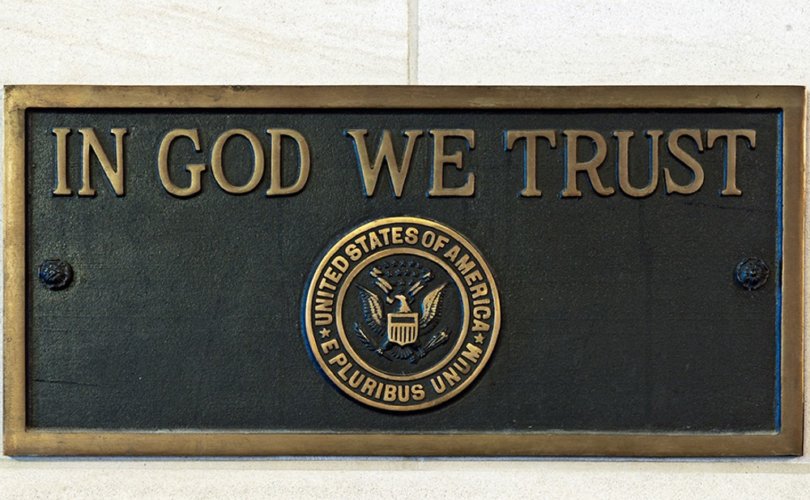 FLORIDA, February 22, 2018 (LifeSiteNews) – The Florida House of Representatives passed a bill 97-10 requiring public schools to display the state’s – and country’s – motto “In God We Trust” in “a conspicuous place.”

Last week’s horrific shooting at a Florida high school on Ash Wednesday has raised questions about the culture that fosters such attacks.

Rep. Kimberly Daniels, a Democrat, introduced the bill because “our schools need light in them like never before.”

“God blessed me to pass two bills on the floor at Session today,” Daniels, who is also an evangelist and writer, posted on Facebook Wednesday.

“It’s quite obvious [that] ever since God has been thrown out of schools, there has been a deterioration in society,” said Orsi, noting the public school system is largely run by a “secularized liberal cabal.”

Bringing God back into the picture is “the beginning of a solution to cast evil out,” said Orsi.

And school shootings aren’t the only way Satan works to destroy the image of God, he said.

“If life can be taken legally at a very, very early stage…what happens to the sanctity of life?” asked Orsi, wondering what impact knowing it’s legal to kill tiny humans has on the “emotionally disturbed or young people who have let evil into their lives.”

Orsi predicted if the bill makes it through the Florida Senate, Governor Rick Scott will sign it.

The bill has angered atheist groups that oppose the expression of religion in schools.

“Even though the phrase is, disgracefully, both the national motto and the Florida state motto, there is no question of this bill’s religious intent,” complained the Freedom From Religion Foundation. “This bill comes at a particularly awful time in the wake of the shooting at the Florida public school.”

“With God’s help, we can remain strong and resolute to resist evil in all its manifestations,” Miami Archbishop Thomas Wenski said after the shooting. “May God heal the broken hearted and comfort the sorrowing as we once again face as a nation another act of senseless violence and horrifying evil.”

Fr. Orsi said that after evil things happen, sometimes secularists will ask “where was God?” to try to get people to abandon their faith.

“The fact is that God is there. And people forget that,” he said. “He was with that phys ed teacher who took the bullets for those kids. God was there at Calvary when Christ died on the cross a painful death.”

But “the end of the story is the Resurrection.”