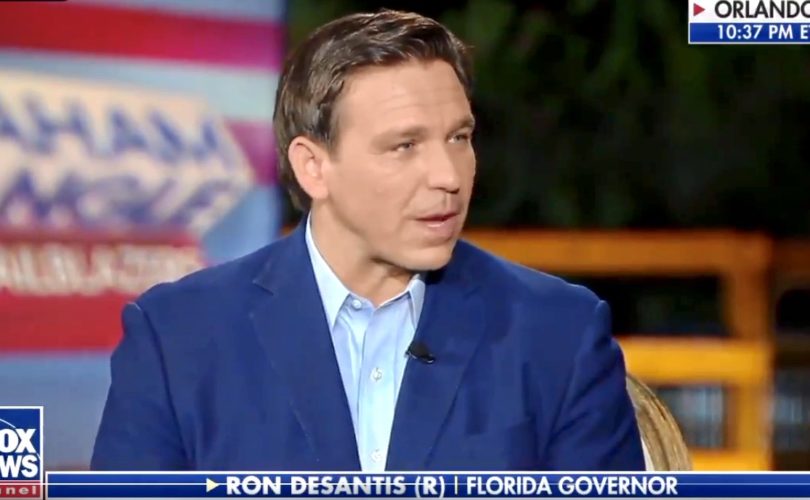 Appearing at a town hall meeting in Orlando on Thursday, April 29, Florida Gov. Ron DeSantis said he would sign the Fairness in Women's Sports Act.

The Fairness in Women’s Sports Act had been proclaimed dead by opponents last week after being shelved by Senate Republicans with just days left in the legislative session, which ended today.

House lawmakers had approved a similar act by a 37-vote margin earlier this month, though Republican Sen. Kelli Stargel, lead sponsor of the Senate version, postponed a hearing for the bill in the upper chamber. Sen. Stargel, who originally sought to allow some “transitioning” males to compete on women’s teams, claimed that the bill was dropped due to other priorities. The last scheduled meeting of the committee tasked to hear the Fairness in Women’s Sports Act was Tuesday.

Senate leaders nevertheless revived the measure by adding it as an amendment to another bill about charter schools that passed both chambers on Wednesday night.

The charter school bill, SB 1028, mandates that sports teams sponsored by public schools and colleges be based on biological sex. “Athletic teams or sports designated for females, women, or girls may not be open to students of the male sex,” it reads. Students affected by violations of the bill can sue for damages.

The original sports bill passed by the House applied to elementary schools and authorized medical verification of a student’s sex in certain cases, though those provisions were dropped in SB 1028. The final version of the charter school bill was approved by House lawmakers 79-37 and by the Senate 23-16 on Wednesday.

LifeSiteNews had launched a campaign to revive support for the Fairness in Women’s Sports Act before the passage of SB 1028.

Republican Florida Gov. Ron DeSantis has said that he plans to sign the bill into law. At a town hall meeting in Orlando last night, the governor told reporters, “We’re going to protect our girls.” “And we want to have opportunities for our girls. They deserve an even playing field,” he said.

Gender-confused males substantially outperform women and girls in athletic competitions, regardless of long-term cross-sex hormone use, numerous studies have shown. A study earlier this year found that the strength advantage of men “transitioning” to a feminized appearance “is only minimally reduced when testosterone is suppressed.”

“These data significantly undermine the delivery of fairness and safety presumed by the criteria set out in transgender inclusion policies,” the study authors reported. The NCAA continues to allow men to compete against women after just one year of cross-sex hormone application, putting female athletes’ basic safety and careers on the line.

Florida would be the eighth and largest state to approve popular women’s and girls’ sports protections this year, which have been attacked by the NCAA and major corporations. The Sunshine State previously has had some of the most liberal athletic policies in the nation.