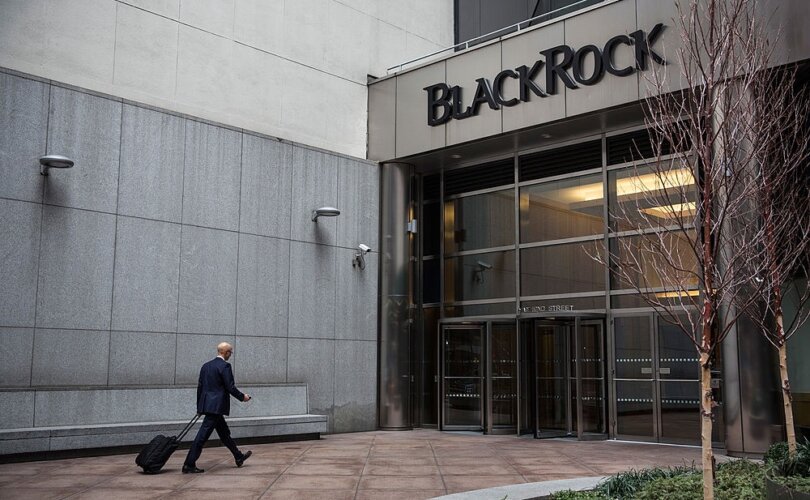 A man walks into the BlackRock offices on January 16, 2014 in New York City. Photo by Andrew Burton/Getty Images

(LifeSiteNews) — Headed by historically popular Republican Gov. Ron DeSantis, the state of Florida is withdrawing a whopping $2 billion in assets from BlackRock, the world’s top investment manager, due to the company’s promotion of left-wing agenda items through divisive Environmental, Social, and Governance (ESG) scores.

The divestment appears to be the largest to date from a Republican state government as BlackRock continues to take hits for its increasingly unpopular promotion of ESG.

Florida Chief Financial Officer Jimmy Patronis’ office made the announcement in a Thursday press release, explaining that by the start of next year “BlackRock’s management of all short- and long-term investments” will be divested from the State Treasury. The funds will instead be moved to alternate investment management companies.

“To meet this end, the asset management company has leaned heavily into Environmental, Social, and Governance standards – known as ESG – to help police who should, and who should not gain access to capital,” he explained.

Broadly speaking, ESG scores are designed to promote investment in companies that advance left-wing social justice goals, including “renewable energy,” racial “equity,” and even abortion access. BlackRock has openly incorporated ESG principles, particularly focusing on environmental causes, and also promised to promote Diversity, Equity, and Inclusion by leveraging its “ESG-focused financial products.” The World Economic Forum, an infamous proponent of mandatory vaccination and lockdowns, widespread abortion access, and the “Great Reset” of society, is listed as one of BlackRock’s “key diversity partners.”

Earlier this year, the firm announced it was launching an effort to help “streamline and standardize ESG data,” with a goal of “reaching over 70,000 private companies.”

READ: Ex-banking analyst explains how ESG scores are weaponized against CEOs to force them to go ‘woke’

In the Thursday press release, Florida’s CFO said he believes it’s “undemocratic” for “major asset managers to use their power to influence societal outcomes,” adding that using taxpayer dollars “to fund BlackRock’s social-engineering project isn’t something Florida ever signed up for.”

“There’s no lack of companies who will invest on our behalf, so the Florida Treasury will be taking its business elsewhere,” Patronis said.

At the time, DeSantis blasted the use of “corporate power” to “impose an ideological agenda on the American people through the perversion of financial investment priorities under the euphemistic banners of environmental, social, and corporate governance and diversity, inclusion, and equity.”

In a  report highlighting Florida’s decision, The Daily Wire said the “divestment appears to be the largest such effort among other Republican state governments” to pull away from BlackRock over ESG concerns.

Other Republican-led states that have begun withdrawing their assets from BlackRock include Texas, South Carolina, Louisiana, and Missouri.

Announcing its divestment from BlackRock in October, Missouri’s state treasurer slammed the corporation for “advancing a woke political agenda above the financial interests of their customers,” The Wall Street Journal reported.