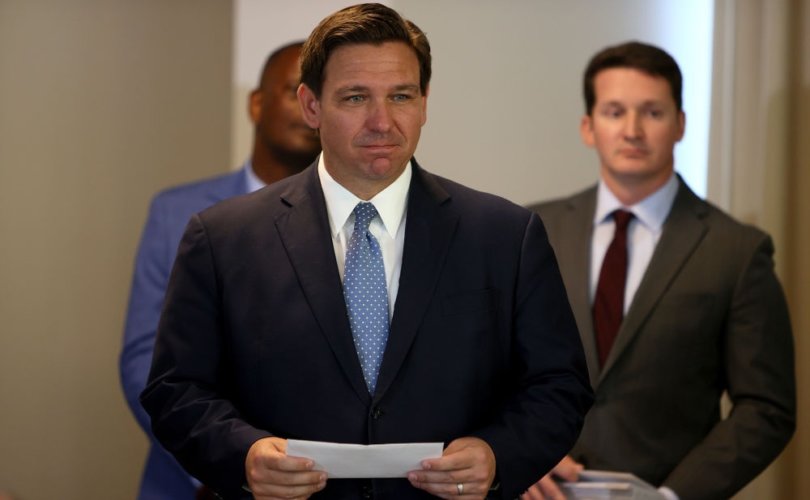 Florida Gov. Ron DeSantis waits to present a check to a first responder during an event to give out bonuses to them held at the Grand Beach Hotel Surfside on August 10, 2021 in Surfside, Florida Joe Raedle/Getty Images

TALLAHASSEE, Florida (LifeSiteNews) — Florida’s Department of Education (FDOE) has thrown out a staggering 41% of the math textbooks submitted to be used in the Sunshine State’s public schools, citing concerns about problematic content that includes critical race theory (CRT) as well as failure to align with state standards.

According to a Friday press release, the FDOE headed by Commissioner of Education Richard Corcoran decided to reject 54 of the 132 mathematics textbooks that had been submitted for approval. The 41% rejection rate is the highest in the state’s history, Fox News reported.

Florida rejects 41% of math textbooks for including CRT, most aimed at K-5 students: ‘Impermissible’https://t.co/U3fyPDe7Vz

Broken down by grade level, the FDOE rejected a total of 35% of books for students in grades 9-12, and 20% of books for sixth to eighth graders. The rejection rate was far higher for books aimed at children in kindergarten through fifth grade at 71%.

“It seems that some publishers attempted to slap a coat of paint on an old house built on the foundation of Common Core, and indoctrinating concepts like race essentialism, especially, bizarrely, for elementary school students,” Florida Republican Gov. Ron DeSantis said in a statement included in the FDOE’s Friday press release.

“I’m grateful that Commissioner Corcoran and his team at the Department have conducted such a thorough vetting of these textbooks to ensure they comply with the law,” DeSantis said.

The decision to cull problematic textbooks from the curriculum comes as Florida’s governor “has led a push to reform education standards and practices in the state,” Fox News noted.

Last year, the Florida Department of Education “proactively informed publishers” of school textbooks that their materials would need to align with Florida’s education standards and “not incorporate unsolicited strategies such as SEL in their instructional materials.”

Last month, DeSantis gave his signature to the Parental Rights in Education Act to bar teachers from instructing young children in kindergarten through third grade about gender identity or sexual orientation.

Signed into law late last month, Florida’s HB 1447 states that “classroom instruction by school personnel or third parties on sexual orientation or gender identity may not occur in kindergarten through grade 3 or in a manner that is not age appropriate or developmentally appropriate for students in accordance with state standards.”