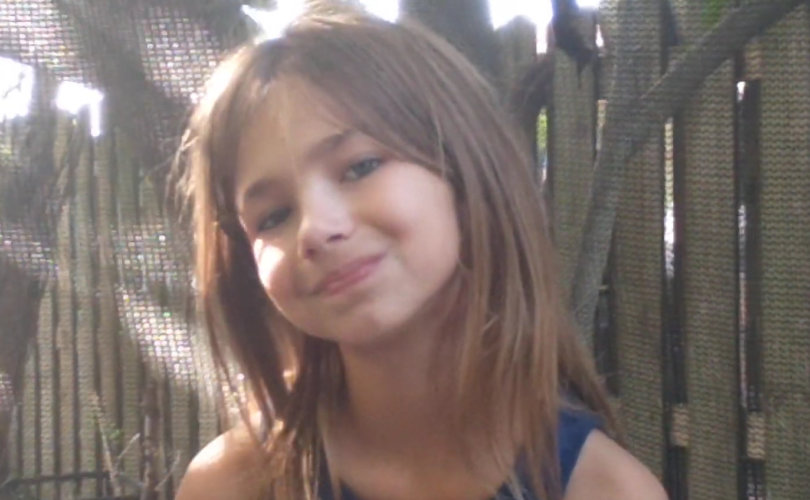 (LifeSiteNews) – The School District of Palm Beach County has dropped its mask mandate. The district had previously suspended a second grader 38 times for violating the mandate. She may have to repeat the grade.

Fiona Lashells is a student in Palm Beach County who just turned 8 years old. She took a stand against a school board policy that she believed was wrong. For months she did not wear a mask to school, even though it had been mandated by her local school board. The litany of suspensions she has been handed is available at a website her mother created outlining the experience.

At a school board event on September 22, 2021, Fiona told the board members that being suspended is “not going to change” her mind, that she still has “the right not to wear a mask,” and that it is “not fair” that she is “getting punished because … the school board is not following the law.”

She also told the school board that she hoped “they all go to jail” for “doing this” to her.

Florida Gov. Ron DeSantis has battled with various school boards in his state which have mandated masks for students. He signed an executive order in July that prohibited mask mandates in schools. After facing legal action from proponents of mandated masking, Florida’s ban on school mask mandates was upheld by a federal judge on September 15, with the court standing firm by rejecting an appeal to reconsider on September 30.

In an effort to allow parents to have the ultimate decision on whether their children will wear masks at school, DeSantis’ administration opted to withhold funds from boards that require students to mask in spite of the government order. At its October 7 meeting, the Florida Board of Education (BOE) unanimously agreed to impose financial penalties for school districts mandating students wear masks.

Fiona made headlines last week as her story was brought to light in a number of major news outlets, including The New York Post. She appeared alongside DeSantis on Fox News and explained to the hosts that she does not like to wear a mask “because you touch it and you have germs on your hands and then you put it on your face and breathe in all the germs.”

One of the Fox News hosts called her stance against the mandate “impressive” and asked Fiona how she felt about the prospect of repeating the second grade. She expressed that she did not want to do that, especially considering she had “done most of the work at home” that she was assigned.

Fiona was visibly shy during the interview, but DeSantis helped her through the question period when she was asked about “how her friends felt” about masking in school. She said that her friends wore them at school because they had to, but did not like them.

After national media pressure and pressure from the DeSantis administration, the School District of Palm Beach County released a letter to the public explaining its decision to drop their mandatory mask requirement. The board described the change as a “face covering opt-out” for parents.

The letter referenced a ruling by Division of Administrative Hearings Judge Newman which came down on Friday as the legal reason behind their change of heart. Judge Newman upheld the DeSantis administration’s block on masking children against their parents’ will.

“The COVID-19 protocols adopted pursuant to section 1003.22(3) should be no more restrictive than necessary to keep children safe and learning in school,” Newman wrote. “The fact that the Emergency Rule achieves this result — and at the same time involves parents in decisions involving their child’s health and education — does not run counter to the broad rulemaking directive.”

The school board also referenced its COVID vaccine position in the letter and made it clear that “the COVID-19 vaccine is voluntary, and not required for students or staff.”