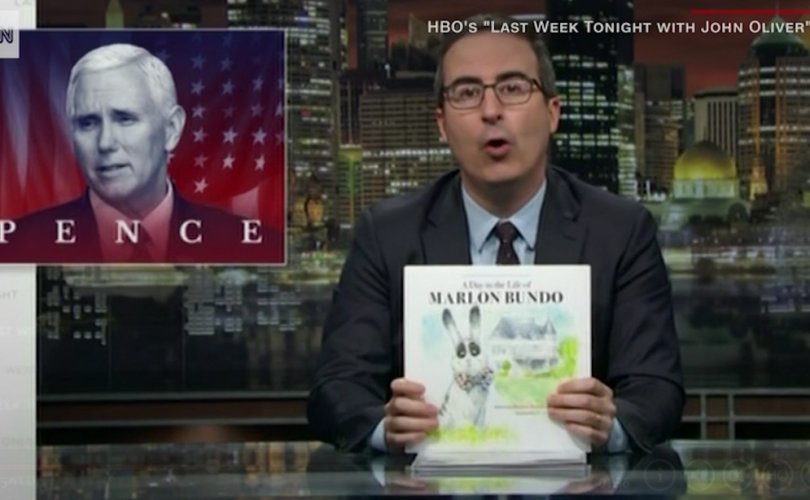 SANFORD, Florida, February 15, 2019 (LifeSiteNews) — A teacher in Florida is being questioned by school authorities for reading a gay-affirming book to elementary-school students.

A so-far unnamed teacher read “Last Week Tonight with John Oliver presents A Day in the Life of Marlon Bundo” without previously informing school authorities or parents, according to local TV reports. It is a parody presented by British comedian John Oliver that depicts a homosexual rabbit who lives at the White House and seeks to be united with another male rabbit.

#Onlyon9: New at 6, Parents are hopping mad after learning that this book about 2 boy bunnies wanting to get married was read to first graders. Now the Seminole County Public Schools has launched an internal investigation over it.#WFTV @LastWeekTonight pic.twitter.com/JiSwilMXnT

Penned by Jill Twiss, the 2018 book is a parody of a book written by Vice President Mike Pence‘s daughter about a pet rabbit, Marlon Bundo. Parents complained about Oliver’s book to authorities at Seminole County School District in Sanford, Florida, which prompted an internal investigation. Wendy Curry, a parent, told WFTV, “It’s not something that should be in an elementary school,” adding, “That’s for me to decide at home — what I want to teach my child and what I feel they are able to handle.”

In the version published by Oliver, which is available at Walmart, Bundo the bunny falls in love with male rabbit that he eventually “marries.” The book was read to students at Pinecrest Elementary School in Sanford, which is close to Disneyworld in nearby Orlando.

“Marlon Bundo’s Day in the Life of the Vice President” was written by Vice President Pence’s daughter Charlotte and illustrated by wife Karen Pence. Charlotte Pence is also the author of “Where You Go: Life lessons from my father,” which recounts her upbringing.

Oliver plugged his book in March 2018 on Seth Meyers’ “Late Night” program, denouncing what he called Vice President Pence’s “homophobic views.” He added, “He emphatically is a homophobe.” Oliver also referred to Dr. James Dobson, the founder of Focus on the Family, as an “appalling human being.”

LGBTQ activists have excoriated Vice President Pence and his wife for upholding their Christian values with regard to sexuality. Karen Pence, for example, was criticized for teaching art at a Christian school in Virginia that chooses to refuse those who engage in homosexual or transgender behaviors. In addition, The Trevor Project — a homosexualist advocacy group — announced last month that it was sending 100 copies of Oliver’s book to Pence’s school.

Oliver’s book was published in 2018 after “Marlon Bundo’s Day in the Life of the Vice President,” according to The Hill.