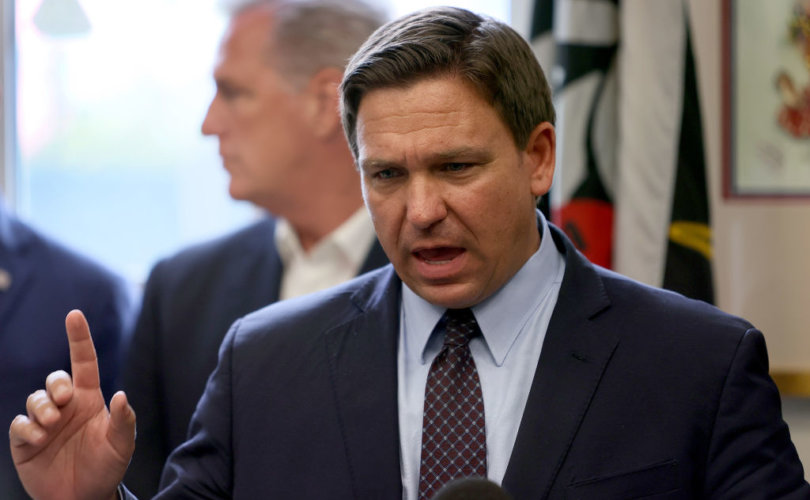 (LifeSiteNews) — COVID-19 cases in Florida have dropped for the fifth consecutive week and new cases are among the lowest in the nation after a temporary increase which caused a flurry of media coverage over the summer. Major outlets had accused the Sunshine State’s Gov. Ron DeSantis of causing the surge with his pro-freedom policies.

“Florida is now outperforming every state in the contiguous United States in terms of new COVID-19 cases per capita. And they did it all without a Vax Pass system, widespread business closures, mask mandates, and/or draconian lockdowns,” wrote independent investigative journalist Jordan Schachtel for the Brownstone Institute.

“And it all happened under the leadership of a man who the corporate media and ruling class have taken to labeling. ‘DeathSantis’ for his refusal to implement draconian COVID policies, such as mandatory masks, pharmaceutical injection mandates, business closures, and the like,” Schachtel added.

According to a New York Times interactive map and case count of COVID-19 reported cases in the U.S., Florida saw a 45.5% decrease in reported cases over the past 14 days.

The data shows that Florida, which has come under fire by Democrat politicians and legacy media outlets for its laws defending the freedoms of Floridians against coercive vaccine mandates, forced masking, and lockdowns, has experienced the most significant drop in COVID cases in the U.S. second only to Hawaii, which saw a 50% drop in reported cases over the past two weeks.

Well it’s official, Florida currently has the LOWEST per capita COVID cases among the contiguous 48 states.

Looking forward to the next batch of DeSantis media coverage that’s sure to be coming soon…https://t.co/xBFQSLJKdz pic.twitter.com/ZzrIDDU6ct

According to the data, Florida, the third-most populous state in the union, is recording a daily average of 2,357 COVID-19 cases per day, compared with 5,501 in heavily-restricted California. The numbers indicate Floridians experience some 11 coronavirus cases per 100,000 people, while California records 14 per 100,000.

Despite nearly even vaccination rates between Florida and California, however (59% and 60% respectively), the New York Times data indicates Florida has recorded some 120 deaths per day attributed to the virus while California has recorded just over 100.

While it is unclear what has caused the disparity, it may have something to do with the fact that Florida, a popular retirement destination, has the second-highest percentage of elderly residents in the country, with 20.5% of the population aged 65 and older out of a total population of 21.5 million, while California ranks 45th in the union for its percentage of elderly residents with 14.5% of its total population of 39.5 million in the 65 and over category.

Additionally, studies have shown that something as simple as the weather can have a lot to do with the transmission of any respiratory disease.

Florida cases rose over the summer while Floridians battled high humidity, tropical storms, and spiking temperatures, leading many residents to seek refuge indoors where respiratory transmission rates are known to be higher.

States with milder summer climates, with more people enjoying the outdoors, saw lower transmission rates over the past months. But as cold weather hits northern and midwestern states and residents of those states head indoors, rates of infection are already beginning to rise, suggesting that cyclical weather patterns, rather than coercive mandates and restrictions, tend to have a more measurable impact on infection rates.

CNN acknowledged the phenomenon in a Tuesday article, noting that “Southern states, many of which have been hotspots, are now starting to see a decrease in Covid-19 cases while many states that have started experiencing cold weather — mostly in the North and Midwest — are seeing an uptick, according to data from Johns Hopkins University.”

Or, alternatively, it got less hot in the South and Delta naturally wanes after passing through populations https://t.co/dcdQC5hRcE

According to CNN, as reported new cases in Florida and its northern neighbor Georgia headed downward, with both states recording “among the 10 lowest case rates in the past week,” the spread of COVID-19 is shifting toward colder areas, in a pattern “similar to what happened last year.”

Let me get this straight. You can’t walk into a restaurant in New York City without a vaccine card, Florida is wide open with almost zero restrictions … Yet, Covid cases in New York are now trending almost double over Florida’s. And NY’s Delta wave may be just getting started.

Last year, disgraced former Democrat Gov. Andrew Cuomo was lauded for his pandemic response before evidence emerged indicating he sent infected elderly people back into nursing homes and covered up the total number of COVID-19-related deaths.

Writing for the Brownstone Institute, Schachtel argued that “Florida is currently ‘stopping the spread’ better than the rest of the nation. No more masks, no more closures, no more lockdowns, and no more restrictions whatsoever.”

According to Schachtel, Florida’s declining numbers of COVID-19 infections, in spite of no statewide jab or mask mandates, means “[a]ll mandates must be extinguished immediately in the name of The Science.’”

Editor’s note: This article has been updated to reflect the accurate population of New York.