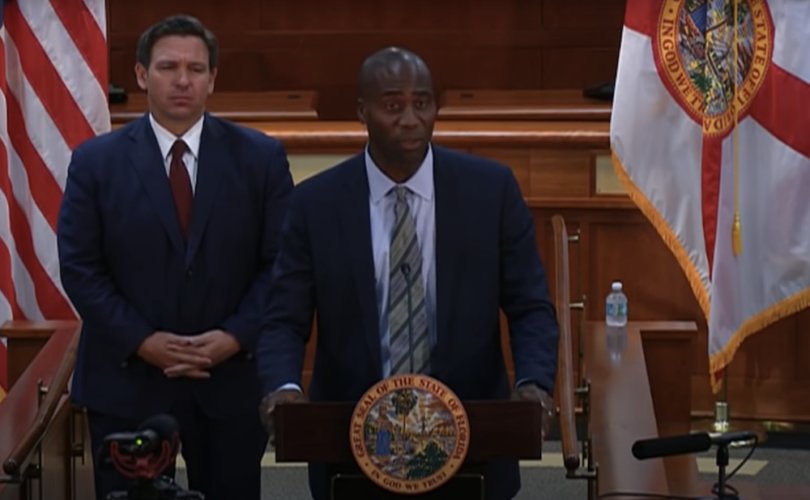 (LifeSiteNews) – Vaccine passports are futile and represent a “dystopian view of public health,” Florida Surgeon General and Secretary of Health Dr. Joseph Ladapo argued this week during an appearance on the Fox News show Primetime.

President Joe Biden’s campaign pledge to “shut down” COVID-19 “never made any sense” and “set up unrealistic and unattainable expectations,” Ladapo told host Lawrence Jones. “And now we have what you expect in that situation, which is failure.”

By contrast, he said, Florida under the leadership of Republican Gov. Ron DeSantis, has been “realistic. We have provided people with options. We have provided – we’ve prioritized seniors and other vulnerable populations and we’ve emphasized living.”

The Harvard-trained medical professor and cardiovascular researcher added that it was “just ridiculous” to make COVID vaccination a condition of attending school or boarding a plane.

“This idea that you could stop this w/vaccines was unrealistic.. Mismatch btwn policies & reality, & more ppl need to wake up to that & stop participating in this really dystopian view of public health.. It’s unhealthy, divisive & political”
—@FLSurgeonGenpic.twitter.com/R564WD0hKQ

“This idea that, you know, that you could stop this with vaccines was unrealistic, but the policies are based on the idea that you can stop this with vaccines and mass testing and things like that,” he said. “So, there’s a mismatch between the policies and reality. And, you know, more people need to wake up to that, I think, and stop participating in this really dystopian view of public health.”

Democrats and their allies have tried to discredit DeSantis since the beginning of the pandemic because he resisted COVID lockdowns in favor of a more targeted approach that focused on the protection of elderly Floridians. But even the left-wing Associated Press eventually admitted that California’s far more restrictive policies didn’t save more lives than Florida’s targeted approach. Democrats eventually tried to explain away the state’s COVID statistics by falsely accusing the DeSantis administration of manipulating the numbers, implicitly conceding the flattering nature of the data.

Throughout the pandemic, DeSantis (who has been floated as a promising contender for the GOP’s 2024 presidential nomination) has been generally positive about the COVID vaccines while defending the rights and choices of Floridians regarding their own health, including standing against school closings, vaccine passports, mask mandates, and local lockdowns, as well as embracing therapeutics including hydroxychloroquine and monoclonal antibodies.

Ladapo, previously known for vocally criticizing mask mandates, joined the DeSantis administration last September, a hiring decision that also helped reassure supporters that the governor’s team would take a balanced approach to the COVID shots. In October, Ladapo called attention to the fact that the vaccines weren’t nearly as protective as originally advertised, and blamed the shots’ biggest fans for vaccine hesitancy, by perpetuating a “climate of scientific dishonesty” about “both effectiveness and safety.”