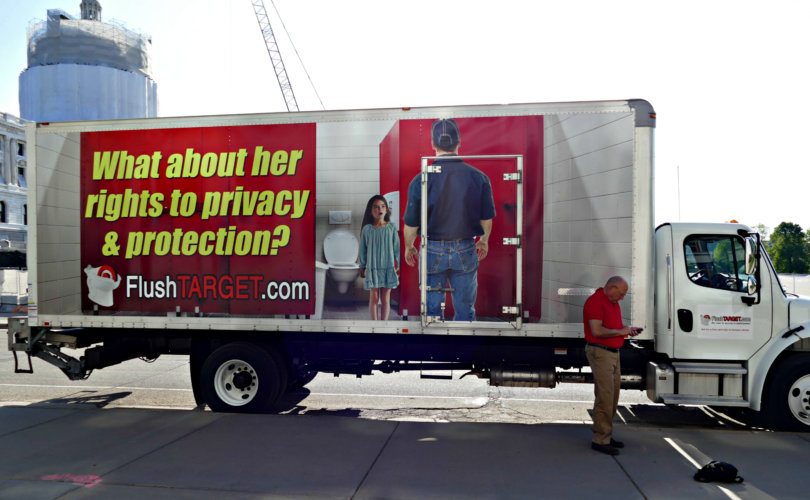 ST. PAUL, Minnesota, May 16, 2016 (LifeSiteNews) – A new campaign to encourage shoppers to ditch Target over their new “transgender” bathroom literally took to the streets today in Minnesota.

A  #FlushTarget truck, bearing an image of a little girl being surprised by a man in the women’s bathroom, and the text “What about her rights to privacy and protection?” will be visting every single Target store in Target's home state over the next few weeks.

There are also plans to bring the truck to other states, if the necessary funds can be raised. (NOTE: To donate to bring the #FlushTarget truck to additional states, click here.)

The #FlushTarget campaign is being organized by LifeSiteNews. It kicked off this morning with a press conference in the Minnesota state capitol. A website for the campaign, FlushTarget.com, was launched simultaneously. The website contains specifics on how people can send the message to the Twin Cities’ based retailer that the new policy puts its customers at risk.

“Everyone has the right to use the bathroom safely and in privacy without fear of being raped or assaulted,” said Claire Chretien, national spokeswoman for LifeSiteNews’ #FlushTarget campaign. “Unfortunately, Target, one of America’s largest retail chains, has decided to let any man access women’s bathrooms in their stores.”

Under Target’s new policy, announced April 19, any man at any time and for any reason can decide to use the women’s bathrooms or fitting rooms in its stores, based upon their subjective “gender identity.” “In our stores, we demonstrate our commitment to an inclusive experience in many ways,” the retailer said in announcing the policy change.

However, despite a boycott with more than one million signatures and plummeting stock prices in its wake, and family leaders voicing privacy and safety concerns, Target has continued to double-down on its commitment to so-called “inclusion.”

“We are not boycotting Target out of fear of the LGBT community,” Chretien stated. “Target can accommodate men that dress as women in a way that doesn’t put women and our young children at risk. Instead of seeking solutions that are safe for both transgender people and women and children, Target has embraced an approach that emboldens predators, threatens women’s safety, and undermines any basic sense of decency.”

LifeSite was joined by the Child Protection League at the press conference. “Target’s policy puts women and children at risk,” the group’s Board Chairman, Julie Quist, said.

“Sexual assault is a crime of opportunity,” she added. “Target has created the opportunity with its new policy.”

LifeSite’s “Flush Target” campaign is also sending a billboard truck to each of Target’s stores in the company’s home state. Duluth had the first visit today, followed by Virginia, Grand Rapids and Bemidji.

LifeSite’s Director of Public relations Andy Parrish said there will be five to six visits per day while the campaign works its way to the Minneapolis-St. Paul metro area.

Chretien said the taking the billboards on the road with a truck was a necessary strategy, as Minnesota billboard agencies declined the ad buy.

“We had to resort to using a billboard truck to get our message out after every billboard company in Minnesota turned down our advertisement,” Chretien added. “It would seem ‘political correctness’ has now trumped ‘free speech’ even in the advertising industry.”

She continued that she doesn’t feel safe at Target knowing that a man can follow her into the bathroom and store employees won’t do a thing about it.

“In a society plagued with astronomical sexual assault rates, it’s unfathomable to me as a young woman that Target is contributing to rape culture by giving grown men unfettered access to women’s restrooms,” Chretien stated.

“Every species consists of males and females, but it seems the most intelligent species has forgotten this,” she said. “Men and women are not interchangeable. Despite the distinct differences between the sexes, something men and women have in common is a natural sense of privacy. Target’s absurd policy has created the opposite of a safe environment and is directly contributing to rape culture and the abuse of women, our bodies, and our spaces.”