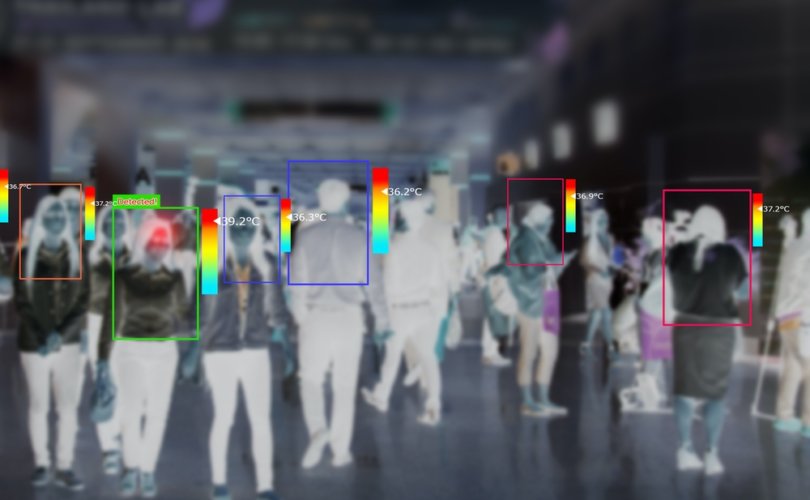 “Digital technologies and automation will play a critical role in the future of air travel,” Forbes predicted. “The need to reduce ‘touchpoints’ at airports implies mandatory use of biometric boarding that allows passengers to board planes with only their face as a passport.”

“A number of airlines including British Airways, Qantas and EasyJet already are using the technology.”

Airports may use “thermal scanning to check crowds for fever-grade body temperatures.”

May 13, 2020, 7:45 p.m. EST: The Milwaukee Sentinel Journal reports: “The Wisconsin Supreme Court has struck down Gov. Tony Evers' order shutting down daily life to limit the spread of coronavirus — marking the first time a statewide order of its kind has been knocked down by a court of last resort.”

Maj. Gen. Kenneth Hara of Hawaii’s coronavirus response team said: “If we let the economy go the way it’s going, I feel there will be significant civil unrest that could lead to civil disobedience and, worst case, civil disturbance and rioting.”

Every year, nearly a billion people suffer from some form of hunger, brought about by war or climate change or simply a lack of means. But now, according to the United Nations, the number of people who are classified as having acute food insecurity—a level of hunger at which a person’s inability to consume adequate food endangers their life or livelihood—could rise from more than a hundred and thirty million to nearly three hundred million, owing to the coronavirus pandemic, which has brought world economies and supply chains to a standstill. And this estimate does not even begin to address the millions of people whose means of achieving a decent living have evaporated.

Pro-life activist and filmmaker Jason Jones has been warning about this since the beginning of the coronavirus.

Tesla’s Elon Musk again expressed his displeasure with the lockdowns, saying they are unconstitutional.

May 13, 2020, 1:49 p.m. EST: District attorneys in “a growing number of Pennsylvania counties say they won’t prosecute those who defy stay-at-home measures” ordered by Gov. Tom Wolf, The Epoch Times reports.

May 13, 2020, 1:47 p.m. EST: Michigan Gov. Gretchen Whitmet has now stripped the 77-year-old barber mentioned below of his operating license without a hearing.

New Jersey recently became one of the seven states (plus the District of Columbia) to legalize assisted suicide by statute. In effect, New Jersey sanctions suicide for some residents through its public policy.

Now, with COVID-19, New Jersey officials are worried about a spike in suicide caused by the shutdown, so for them, suicide is bad.

May 12, 2020, 3:22 p.m. EST: The Los Angeles Times reports, “Los Angeles County’s stay-at-home orders will ‘with all certainty’ be extended for the next three months, county Public Health Director Barbara Ferrer acknowledged during a Board of Supervisors meeting on Tuesday.”

May 12, 2020, 3:06 p.m. EST: In France, four Catholic priestly and religious associations, along with a lay Catholic group, will separately argue to the highest administrative court in France about overturning the continued ban against all public religious services.

In the United States, the federal government is spending $100 million on needles and syringes for a “COVID-19 Mass Vaccination Campaign.”

And in Canada, Alberta’s health minister is allowing police access to confidential patient medical records. Alberta Health Services will be allowed to “provide information to police, confirming whether or not an individual has tested positive for COVID-19.”

Some jurisdictions in the U.S. – Florida, Massachusetts, Alabama, parts of North Carolina – have adopted similar measures.

May 12, 2020 (LifeSiteNews) – USA Today reports, “The federal mental health czar is calling for more money to expand services to help people suffering amid the social isolation imposed by the coronavirus pandemic, as a new study estimates related deaths from alcohol, drug overdose and suicide could reach 150,000” (emphasis added).

Elon Musk has reopened a California Tesla factory in defiance of the state’s lockdown.

“If anyone is arrested, I ask that it only be me,” he tweeted.

Tesla is restarting production today against Alameda County rules. I will be on the line with everyone else. If anyone is arrested, I ask that it only be me.

In San Jose, California, people have been advised not to continue the practice of “drive-by” parades – typically done to greet a friend or celebrate a birthday or milestone without getting close to the person physically or entering his house – because it’s not considered “essential” and is technically a “violation of the shelter-in-place order issued by the county health officers.”

More than one million healthcare workers have lost their jobs as hospital revenues have plummeted, NPR reported last week.

The World Health Organization (WHO), the pro-abortion United Nations entity whose close relationship with communist China and poor handling of the pandemic are under international criticism and scrutiny, has complained that governments are not implementing enough surveillance techniques as countries re-open.

The WHO’s Dr. Michael Ryan “said that robust contact tracing measures adopted by Germany and South Korea provide hope that those countries can detect and stop virus clusters before they get out of control.”

He said “other nations exiting lockdowns have not effectively employed contact tracing investigators who contact people who test positive, track down their contacts and get them into quarantine before they can spread the virus.”

Ryan previously suggested to authorities that they find those who may have the coronavirus in family homes and “remove them.”

The spread of the coronavirus has been “taken off the streets and pushed back into family units,” Ryan said on March 22. “Now we need to go and look in families to find those people who may be sick and remove them and isolate them in a safe and dignified manner.”

“Just so you know, we’re coming to your house, seizing your children and ‘isolating them in a safe and dignified manner,’ whatever that means,” he translated.

Ryan is not the only “public health” official to call for the state to remove people from their homes. Discussing massive “contact tracing” efforts, Ventura County, California Director of Public Health Dr. Robert Levin said people with the coronavirus would be taken from their homes if they didn’t have what the government considered enough bathrooms.

“We also realize that as we find more contacts some of the people we find are going to have trouble being isolated for instance if they live in a home where there's only one bathroom and there are three or four other people living there and those people don’t have COVID infection we're not going to be able to keep the person in that home,” he said. “Every person who we're isolating for instance needs to have their own bathroom and so we’ll be moving people like this into other kinds of housing.”

Levin’s comments, which he later walked back after public outcry, come as U.S. House Democrats push for the passage of H.R. 6666 to fund the tracing of individuals believed to have been in contact with anyone who has tested positive for coronavirus and require them to quarantine.

In Michigan, PJ Media reports that a “militia” has mobilized to prevent the arrest of a 77-year-old barber who reopened his shop.

The Mayor of Providence, Rhode Island told constituents that if they come across someone not wearing a face mask, “You should socially shame them, so they fall in line.”

Israeli Prime Minister Benjamin Netanyahu has been criticized for suggesting children be microchipped so authorities can make sure they are not getting too close to each other when the lockdown ends.

Russian President Vladimir Putin’s spokesman has tested positive for the coronavirus and is in the hospital.

Recent LifeSiteNews articles on the coronavirus crisis include: