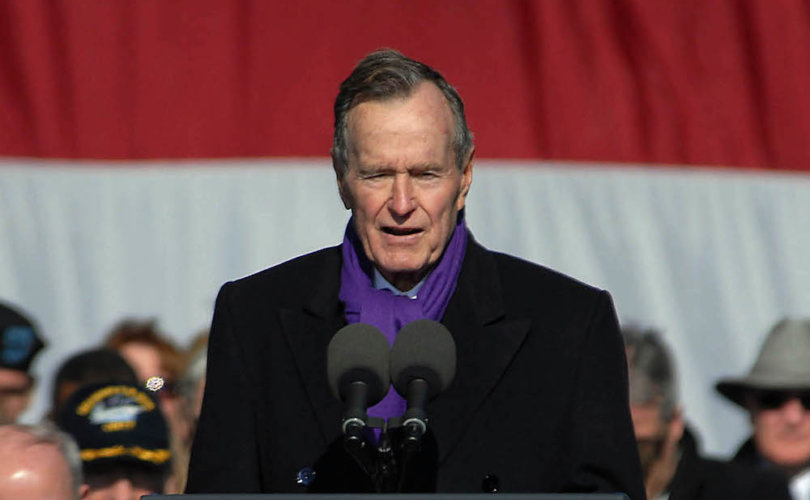 WASHINGTON, D.C., September 20, 2016 (LifeSiteNews) – Former President George H.W. Bush has made up his mind who he’s voting for – he’s with her, according to an insider.

After visiting the 41st president of the United States in Maine on Monday, Kathleen Kennedy Townsend posted a photo of the two on Facebook with the message, “The President told me he’s voting for Hillary!!”

The photo has since vanished.

When asked for a comment last night, the eldest member of the Bush family political dynasty did not directly respond.

“The vote President Bush will cast as a private citizen in some 50 days will be just that: a private vote cast in some 50 days,” Bush family spokesman Jim McGrath told the media. “He is not commenting on the presidential race in the interim.”

The former president, as well as President George W. Bush and Jeb Bush, skipped the Republican National Convention in Cleveland this summer, a move many attributed to pique over Donald Trump vanquishing Jeb Bush in the primaries despite the Bush scion’s prohibitive fundraising edge and name-recognition.

A host of Bush family confidants have endorsed Clinton over Trump and Jeb, who promised to vote for the eventual Republican nominee but has publicly reneged.

Despite their apparently conflicting views on numerous issues, the Bush and Clinton families enjoy a close, warm, and personal relationship. The elder Bush hit it off with former President Bill Clinton during efforts to raise money for victims of the 2005 tsunami. Nine years later, George W. Bush proclaimed Bill Clinton his “brother from another mother,” noting that relationship makes Hillary Clinton “my sister-in-law.”

The Bush family has a long history of supporting Planned Parenthood and global population reduction efforts.

Bush’s father, U.S. Senator Prescott Bush of Connecticut, backed Planned Parenthood during its early days, before abortion became legal, when it was the public face of the birth control movement. Bush-41 attributed his father’s close loss for re-election in the 1950 election to that issue, according to the foreword of a book on the “world population crisis” written while he served as U.S. ambassador to the United Nations.

During his tenure in the U.S. House of Representatives, Bush so adamantly supported family planning programs, including Title X, that he earned the nickname “rubbers.”

“I was impressed by the sensible approach of Alan Guttmacher, the obstetrician who served as president of Planned Parenthood,” Bush recalls of a 1967 Congressional hearing in the book. “When I moved to the United Nations in 1971 as United States Ambassador, I found that the population problem was high on the international agenda.”

“Certainly the private organizations, like the Population Crisis Committee, Planned Parenthood-national and international-, the Population Council, the Population Reference Bureau, the Population Institute, Zero Population Growth, and others, have played a major role in assisting government policy makers and in mobilizing the United States response to the world population challenge,” Bush added.

While running for president in 1980, George H.W. Bush described his stance on abortion as pro-choice, a position he changed before his second presidential campaign in 1988. He said his views had evolved while serving as vice president, largely due to the influence of President Ronald Reagan. His wife, Barbara Bush, remains pro-choice.