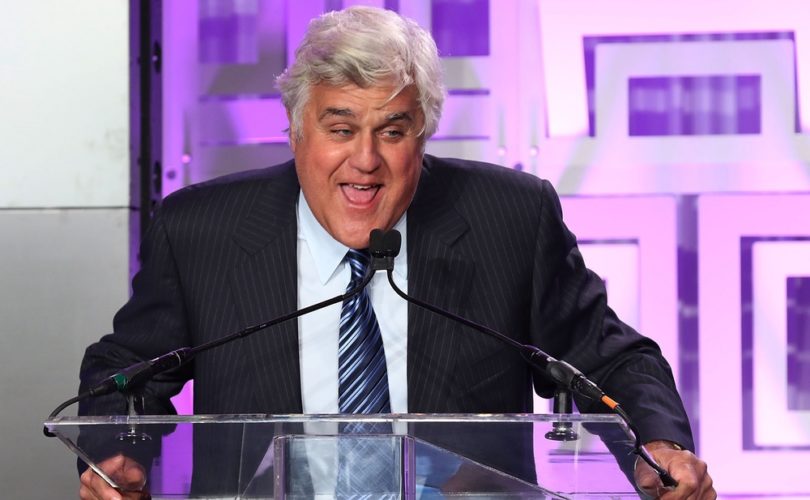 UPDATE, June 12, 2021: FOCUS informed LifeSiteNews this week that Jay Leno is no longer speaking at their event.

May 26, 2021 (LifeSiteNews) – Jay Leno and George W. Bush are lined up as special guest speakers for the Fellowship of Catholic University Students’ (FOCUS) inaugural “Founder’s Forum” in October.

“At this intimate gathering of like-minded friends, you’ll have the chance to connect with others who share your faith and values,” reads the event description. Attendees will also “receive an inside look at what the future holds for FOCUS as God calls us to deep impact and exponential growth,” as they enjoy the Ritz-Carlton, Laguna Niguel in California.

According to the “Founder’s Forum” website, FOCUS will pay for attendees’ lodging at the posh resort: “It would be our pleasure to treat you to the entire weekend, including hotel, breakfasts, and dinners. Your only cost will be your transportation, parking and/or valet fees, lunches, and any expenses during your free-time.”

“It is a limited-invite event, but we encourage those interested to contact FOCUS through the website, for consideration for future events,” a FOCUS representative told LifeSiteNews when asked if it was open to the public.

FOCUS brands itself as a “Catholic collegiate outreach” group of missionaries “trained in Church teaching, prayer, sacred Scripture, evangelization and discipleship,” who “build up students in the faith” so that the students can, in turn, “make disciples” of Christ.

FOCUS missionaries, many of whom are recent college graduates, fundraise their salaries and are a fixture at the Newman centers at many American colleges. FOCUS is in 180 locations, according to its website.

The dissident National Catholic Reporter (NCR) noted, “The organization is modeled after the even larger Protestant college outreach program, ‘Cru,’ which was founded as Campus Crusade for Christ.”

Leno has hosted at least 9 fundraisers for abortion activists, including one honoring international mobile abortion clinic

Leno has hosted at least nine fundraisers for the pro-abortion Feminist Majority Foundation (FMF), which founded the National Clinic Access Project in an effort to keep abortion facilities open. Family Research Council president Tony Perkins noted that FMF has gone so far as to ask young women to “launch protests against their local crisis pregnancy centers.”

In 1998, Leno and his wife donated $100,000 to the FMF, supposedly to “restore women’s rights to work, education, healthcare and freedom of movement” in Afghanistan. Leno’s wife Mavis has been a FMF board member since 1997, according to the group’s website, and while much of her “feminist” advocacy focuses on women in Muslim-majority countries, FMF itself is staunchly pro-abortion and devotes much of its energy to the U.S. pro-abortion movement.

“Feminist Majority Foundation affirms the right of every individual to access safe abortion care [sic], regardless of income or zip code, which is why we unequivocally support repealing the Hyde Amendment, which prohibits pregnant people from using Medicaid to pay for their abortion care [sic[,” its website says. “FMF is a member of the All* Above All coalition, which unites organizations and individuals to work towards increasing access to abortion for all people.”

In 2007, Leno co-chaired the FMF’s third Global Women’s Rights Awards (he has hosted at least nine of these, according to the FMF). That event honored Dr. Rebecca Gomperts, founder of Women on Waves, “a mobile clinic offering safe abortions [sic] and inspiring legalization campaigns internationally.”

Women on Waves offers women in countries where abortion is illegal the opportunity to abort their children on boats in international waters.

“Hosted by Jay Leno, the evening’s activities also included an auction, which featured items such as an original, first issue of Ms. magazine signed by Gloria Steinem,” the FMF wrote of the event. “All funds raised during the auction and through the event directly help support the Feminist Majority Foundation’s continuing efforts to raise the status of women and girls in this country and around the world.”

The Catholic League has blasted Leno, famous for his stand-up comedy routines, for his prolific mockery of Catholic priests, whom he frequently paints with a broad brush as a group of pedophiles and sex addicts.

As recently as March 2021, Catholic League president Bill Donahue remarked, “The single biggest problem the Catholic League has had with comedians like Leno is their penchant for making sweeping generalizations. Of course there have been miscreant priests. But to indict tens of thousands of innocent priests because some are rogues is indefensible.”

“If it is wrong to negatively generalize from the individual to the collective about other demographic groups, why is it acceptable to condemn all Catholic priests for the offenses of a few?” Donahue continued.

Donahue pointed out that he discussed his concerns with Leno in 1997, but that “a few years later, Leno started in again” with repeated jokes portraying priests as molesters and perverts.

Father Dave Nix is the first former FOCUS missionary to have been ordained a priest. He served as a parish priest in the Archdiocese of Denver and is now a diocesan hermit.

As leftist NCR noted, Leno “has not been public about his own personal faith commitments.” LifeSite has not been able to find any indication that Leno has repented of or distanced himself from his past pro-abortion activism. LifeSite will update this article if any such evidence is discovered.

While George W. Bush, who is a member of the United Methodist Church and most well-known for starting the Iraq War during his time in office, was publicly opposed to same-sex “marriage” as U.S. president, The Boston Globe reported Bush “offered to perform” a same-sex “wedding” in 2013.

The Boston Globe’s Matt Viser told the pro-LGBT Washington Blade in response to an inquiry about the article, “I’ll pretty much let the piece speak for itself on this one.”

Bush spokesman Freddy Ford told CBS News, however, “that while the former president is indeed friends with” the homosexual couple in question, “he doesn't recall making an offer to officiate their wedding.”

Our intention for this event — as with all individuals we encounter on campus and beyond — is to grow in friendship with those in attendance and together be drawn deeper into the truth, joy and beauty of the Gospel of Jesus Christ and the mission of the Catholic Church.

Several high-profile speakers and entertainers will be a small portion of the schedule, including former President George W. Bush and Jay Leno. We are excited to have a well-known advocate for the unborn like President Bush address the attendees.

Along with the Voices of Rock artists, we are confident that President Bush and Jay Leno will pique the interest of those who may not ordinarily come to an event like this. We hope to share the mission of FOCUS and the impact of 20+ years of evangelization on campus and beyond — perhaps helping some to encounter Jesus powerfully for the first time while inspiring all who attend to be missionary disciples.

The Voices of Rock artists at the FOCUS event will be “John Elefante (Kansas), Kevin Chalfant (Journey), Randall Hall (Lynyrd Skynyrd), and Jason Scheff (Chicago), performing their greatest hits together,” according to the “Founder’s Forum” website.

Dolan’s Archdiocese of New York recently announced it will segregate vaccinated and unvaccinated parishioners, and only allow people who have received experimental coronavirus injections to sing in choirs or be altar servers.

Some of the most heated criticism of Cardinal Dolan came when he agreed to act as the grand marshal of New York City’s St. Patrick’s Day parade, in which gay activists marched under a banner promoting homosexuality.

Michael Hichborn, who at the time was director of American Life League’s Defend the Faith project, called the decision called “a dereliction of duty,” and National Catholic Register journalist Pat Archbold said it represented “nothing less than an endorsement of the normative nature of the gay identity.”

In 2019, Dolan said that he would not deny Holy Communion to publicly pro-abortion Joe Biden, despite teaching from the Congregation for the Doctrine of the Faith that a politician who consistently campaigns for permissive abortion laws “must” be denied Holy Communion. Canon 915 of the Catholic Church’s Code of Canon Law says that those “obstinately persevering in manifest grave sin are not to be admitted to holy communion.”

“FOCUS claims that its mission is ‘to share the hope and joy of the gospel with college and university students, inspiring and equipping them for a lifetime of powerful Christian leadership,’” Hichborn, now president of the Lepanto Institute, told LifeSiteNews.

“One has to wonder just exactly how that mission falls into practice with the speakers they have lined up. Cardinal Timothy Dolan horrified Catholics throughout the country by supporting the inclusion of homosexuals in a parade dedicated to St. Patrick. Jay Leno is on the record endorsing same-sex ‘marriage.’ And George W. Bush isn't even Catholic!”

Hichborn continued, “The mission of the Catholic Church is the salvation of souls, and if FOCUS wishes to develop Catholic leaders, then it needs to ‘focus’ its attention on the four last things, rather than entertainers and politicians.”

The founder and CEO of FOCUS, Curtis Martin, was appointed Consultor to the Pontifical Council of the New Evangelization by Pope Benedict XVI in 2011.