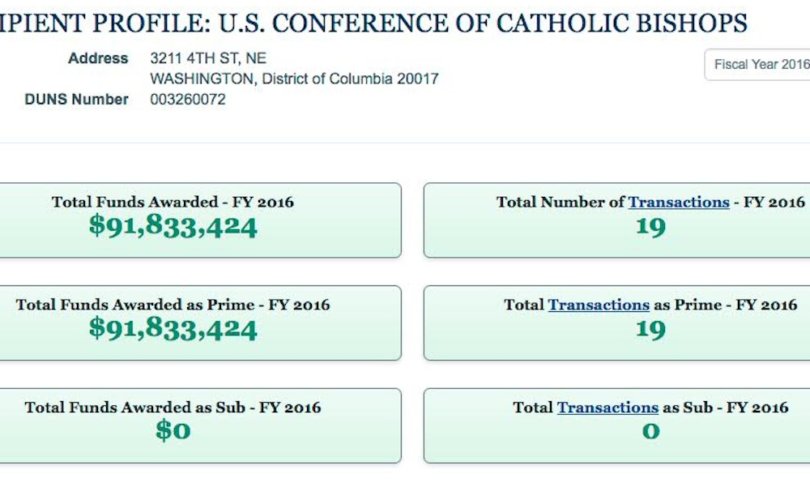 WASHINGTON, D.C., September 8, 2016 (LifeSiteNews) – After leaked documents show billionaire George Soros has been trying to purchase influence with Catholic Church leadership in the United States and Rome to advance his “progressive” agenda, details continue to surface that raise the question of just how successful Soros may have been in his quest. The massive funds coming to the USCCB from the Obama Administration over pet issues such as refugees ($91 million) have some wondering if that is a reason for the bishops' virtual silence on Presidential candidate Hilary Clinton's atrocious record on life and family.

The American Catholic hierarchy is elevating other causes to primacy in place of the life issue, a new report says, “relegating the pro-life ministries to the doctrinal ash heap and committing funds and personnel to promote environmental and migration issues.”

Thousands of federal grants and contracts come from the Obama administration to the Catholic Church, Yore says in the report, but in particular, hundreds of millions of dollars in fiscal year 2016 alone found their way to the USCCB, Catholic Charities, CRS, and the International Catholic Migration Commission (ICMC), “jaw dropping grants to carry out the Obama agenda.”

“We’ve got the most virulently anti-life administration in the history of the United States,” Yore told LifeSiteNews. “And the Catholic Church is propping up the administration.”

“I find it very troubling that the Church is cooperating with the Obama administration,” she said.

Three of the grant recipients comprise an ongoing fiscal relationship between the U.S. bishops and Obama’s administration, Yore said in the report published by The Remnant.

LifeSiteNews did not hear back from the USCCB from an inquiry for comment on Yore’s report.

“The size of these grants is enormous,” Yore told LifeSiteNews.

Catholic observer Deal Hudson, Ph.D, publisher and editor of The Christian Review, echoed Yore’s concern that the nation’s bishops had become too beholden to the Obama administration, stating, “It appears that the bishops' conference has become a virtual vendor of the federal government.”

Hudson had also detailed in his column last month at the Christian Review how the U.S. church is helping the Clinton/Kaine ticket with its silence.

Two weeks later, Hudson lamented the failure of Catholic bishops and clergy to reasonably respond to the Clinton candidacy and pro-abortion Democrat platform, writing, “Yes, there are some bishops and priests reminding Catholics to consider the abortion issue in casting their ballots, but the number is pitifully small, resulting in virtual silence from the Church.”

The Obama administration’s agenda with the Syrian refugee crisis has become the Church’s mission, but Yore said Middle Eastern Christians make up only a tiny fraction of the refugees; otherwise, the federal contracts would be in jeopardy.

“Along comes mega-billionaire George Soros as the global architect of an international mass migration policy that fills the Catholic Church coffers and floods Europe and America with Muslim refugees,” Yore said. “Wake up, Catholics! The USCCB and its partners are quietly assisting the Obama administration in resettling into the United States tens of thousands of Muslim Syrian refugees.”

There has been no opportunity for a discussion about this, she continued, and if there was nothing to hide, then Americans should know how many refugees are being settled in the United States. But there are huge numbers and no pictures.

“When in doubt, follow the money,” said Yore, a member of the Heartland Institute delegation to protest the Vatican exclusion of all scientific opinions and reliance on population control experts. “This ecclesial trail is flush with cash.”

Yore said that given the Obama mass refugee resettlement program has been so lucrative for the USCCB, and GOP presidential candidate Donald Trump’s plan to suspend the Muslim refugee migration program into the United States would be quite costly for the bishops, it therefore is no surprise the bishops have been silent on the pro-abortion Clinton candidacy.

Individual bishops have been critical of Donald Trump, however, and Yore said as well it’s no surprise that the Catholic bishops, under Vatican direction, are promoting the migration of Muslim refugees into the United States.

“It’s no surprise that New York Cardinal Timothy Dolan criticized Trump by writing that “Nativism is alive, well – and apparently popular!” she recounted.

“It’s no surprise that Bishop Kevin Farrell of Dallas condemned what he called the “déjà vu of immigrant bashing,” Yore continued, “reminding his diocesan Catholics of Trump’s words.”

And further, she said, “It’s no surprise that LA Archbishop Jose Gomez opined that Trump’s stance on immigration “is not right.”

“Catholics are witnessing the bureaucratic deconstruction of the pro-life movement in chanceries and the elevation of migration and immigration in its place,” Yore concluded, and instead, “Catholic children are learning about the sin of littering, the importance of tree hugging and sexual hugging in the latest Vatican sex education curriculum.”

It’s expected that the Bishops’ Conference will keep silent about Clinton while also criticizing Trump for his position on Syrian refugee migration, she said, opting to not bite the hand that feeds it.

“We hear much about ‘vote your conscience,’” Yore said. “This isn’t about conscience, folks. It’s about their checkbook.”