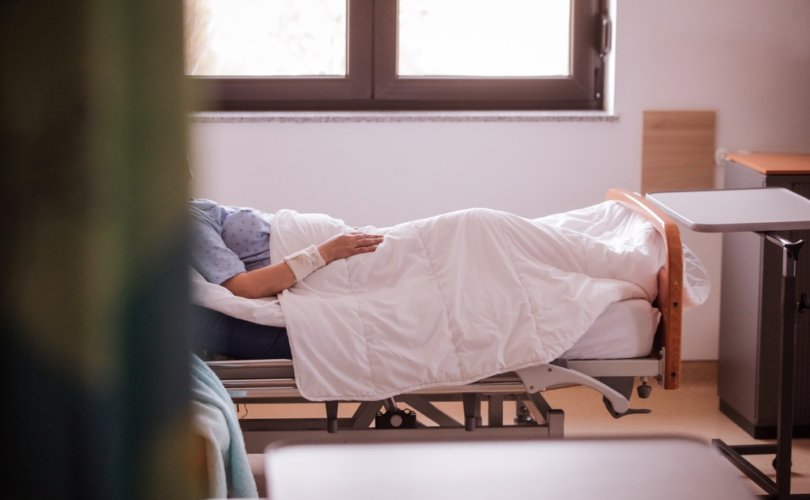 LONDON, England, January 11, 2021 (LifeSiteNews) — A disabled Polish man has once again been reattached to a tube or tubes providing him with hydration and nutrition.

Today a U.K. Court of Appeal directed another stay of the December 15 order to remove the severely brain-damaged patient from life-supporting treatment. The patient, who has now been removed from clinically assisted hydration and nutrition three times, began to receive food and water late last night after his birth family applied for today’s hearing.

Thanks to a transparency order, the names of patient, the members of his family, his doctors, and at least two of the experts cited, may not be published.

Lady Justice King and Lord Justice Peter Jackson agreed that the stay would last only until January 13 at 18:00 GMT, giving another opportunity to for those who wish RS to continue living to make a substantive case before the European Court of Human Rights.

The agreement followed an hours’ long hearing today in which a new barrister for RS’s birth family argued for an appeal of Mr. Justice Jonathan Cohen’s December 31 decision to uphold his own earlier order to a National Health Service (NHS) Trust hospital to discontinue life-sustaining treatment to RS. Cohen had also rejected requests that RS be examined by an expert chosen by the family and that he be airlifted to Poland for treatment there. The appeal, strenuously opposed by a barrister for the NHS Trust, and slightly less opposed by the barrister representing the Official Solicitor acting in RS’s best interests, was rejected by the court.

The videos are controversial because they were taken by RS’s family members during a Zoom call with a neurologist now known to the court as “Dr. P” without the permission of either RS’s wife or his doctors. On December 31, Mr. Justice Cohen was strongly critical of the clandestine way RS’s family members and Dr. P had obtained the video footage. He also put no weight on the evidence Dr. P put before the court on December 30, noting that Dr. P had not spoken to RS’s doctors, seen his file, or conducted a proper examination of RS.

Mr. James Bogle, the barrister representing RS’s birth family, argued that objections to Dr. P and his evidence did not apply to Dr. S, as the latter had been involved in conversations with RS’s doctors and had written a letter on December 6 indicating that he agreed with their assessment of the patient’s condition. Dr. S’s January 6 letter indicated a change in his opinion, suggesting that RS is improving.

RS’s doctors do not agree that RS is improving and is in a minimally conscious state. After an examination at the end of December, at least one of them testified that the patient was moving into a merely vegetative state.

Dr. S. was not present at the hearing, which was the second in which RS’s case was brought before Lady Justice King and Lord Justice Peter Jackson. A representative of the Polish Embassy was present.

RS, a middle-aged husband and father, has been lying in an English hospital since November 6, when he suffered a heart attack that resulted in severe brain damage. His doctors told his wife that he was unlikely to recover consciousness and had only a small chance of moving into a minimally conscious state. At the same time, however, the doctors believe that on life-support RS could live for five or more years in that state.

The NHS Trust responsible for RS’s care applied to the Court of Protection for permission to remove RS from life-support. RS’s wife supported this application, but his birth family, including his mother, two sisters and niece, opposed it. While testifying that RS was a devout Catholic who was anti-abortion and anti-euthanasia, RS’s wife also said that he would not want to be a “burden” to his family. RS’s birth family have consistently argued that RS would not want to be dehydrated to death and had objected to the court decisions leading to the death of infant Alfie Evans.

RS is able to breathe without clinical assistance.

The RS case has become a cause celebre in his native Poland, where conservative and Catholic newspapers have voiced opposition to his passive euthanasia. The revelation that RS’s doctors had wanted to remove his organs for donation added fuel to the media fire. It is being reported in Poland as truth that RS is in a minimally conscious state.

In the United Kingdom, clinically assisted hydration and nutrition are considered medical treatment, and a death resulting from their removal from a comatose patient is not legally considered euthanasia.

A separate appeal for the continuation of RS’s life-supporting treatment has been made to the United Nations Committee for Persons with Disabilities by a Polish legal foundation called Ordo Iuris.

Dr Filip Furman of Ordo Iuris told LifeSiteNews via email that he believes the stay of the dehydration order shows that “ethical reflection” is not entirely absent from the British judicial system.

“The continuation of life support — although very short and withdrawn earlier — is, in my opinion, a sign that some kind of ethical reflection still exists within the people representing British judicial system,” Furman said.

“Although the appeal to the European Court of Human Rights was previously rejected, the new facts concerning the case (like today’s decision or another opinion of a Polish neurologist concerning the state of the patient, issued last week) will bring another — hopefully successful — appeal to the ECHR,” he continued.

Furman, who is the the Director of the Center for Social Sciences and Bioethics for the legal institute, says he hopes for more action from the Polish government.”They’ve already done a lot, but in these new circumstances there is a new opportunity for their actions before the ECHR.”