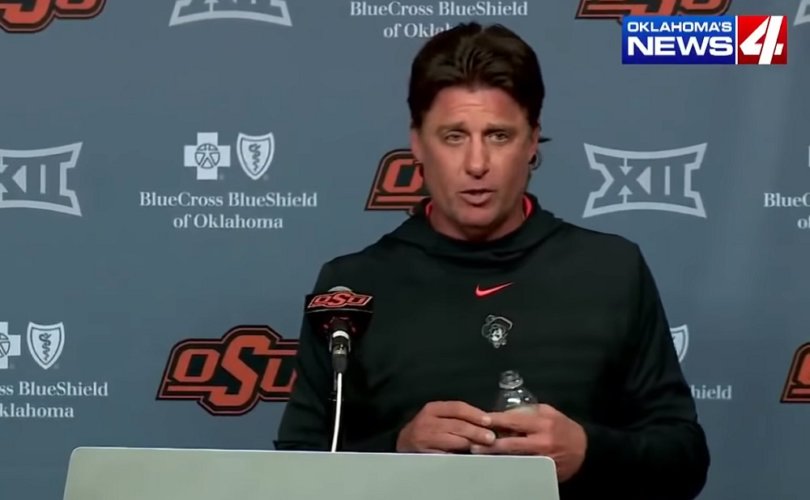 MIDWEST CITY, Oklahoma, July 15, 2020, (LifeSiteNews) – Oklahoma State football coach Mike Gundy has agreed to take a $1M pay cut and a shortened contract. This comes after he was outed on social media last month for wearing a t-shirt with the logo of a conservative news outlet.

On June 10, Gundy, while on a fishing trip with his two sons, was pictured wearing an OANN t-shirt. OANN (One America News Network) is a news source known for its support of President Donald Trump and for its criticism of the Black Lives Matter movement. The BLM movement has been exposed by many as a Marxist-run organization that has as its goal the overthrow of America.

As the picture of Gundy circulated on social media, Oklahoma State Cowboys star running back Chuba Hubbard publicly condemned Gundy for wearing the shirt. Hubbard tweeted, “I will not stand for this. This is completely insensitive to everything going on in society, and it’s unacceptable.”

I will not stand for this.. This is completely insensitive to everything going on in society, and it’s unacceptable. I will not be doing anything with Oklahoma State until things CHANGE. https://t.co/psxPn4Khoq

He then threatened to boycott the team, saying, “I will not be doing anything with Oklahoma State until things CHANGE.” Several current and former players supported Hubbard’s tweet.

Later the same evening, Gundy and Hubbard discussed the issue, Hubbard apologizing for not having spoken to Gundy privately before calling him out publicly, while Gundy promised to make “some changes.”

Despite previously calling OANN “so refreshing” because “there’s no left, there’s no right, they just reported the news,” Gundy publicly apologized on Twitter for the “pain and discomfort” he caused by wearing the OANN tee-shirt.

Gundy said he “didn’t know some of the stances they [OANN] had taken,” having worn the shirt without “knowing enough about the shirt.” OANN has repeatedly exposed the anti-American and violent ideology behind the BLM movement.

After his public apology, Gundy “offered” to reduce his salary by $1M and to shorten his contract from five years to four years.