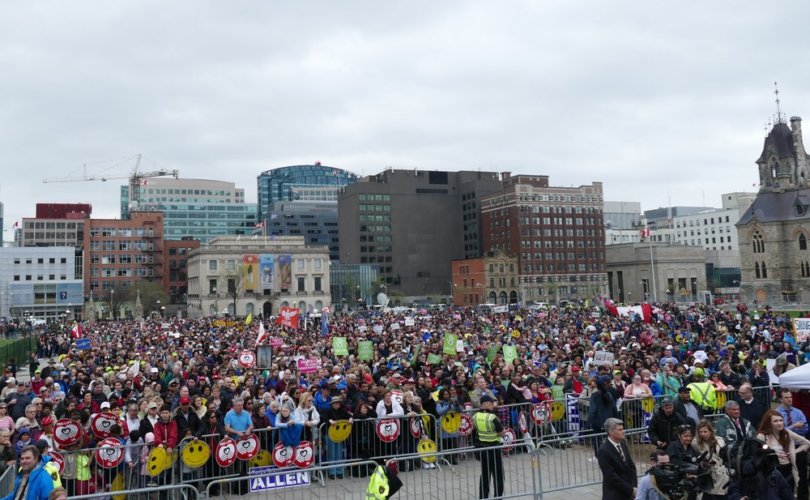 The crowd at the 2018 National March for Life in Canada

OTTAWA, April 17, 2019 (LifeSiteNews) — LifeSiteNews has launched a “share” and “go” video to promote Canada’s National March for Life in Ottawa on May 9 and to raise money for Campaign Life Coalition.

LifeSiteNews will donate 5 cents to Campaign Life Coalition every time the video below is shared on Facebook.

The 2019 National March for Life will mark 50 years of legal abortion in Canada.

And it’s more urgent than ever that pro-lifers show up en masse on Parliament Hill.

The March is both a memorial for the victims of abortion and a “promise” by pro-lifers to persevere until abortion is ended, writes Josie Luetke of Campaign Life Coalition on CLC’s youth blog.

Since May 14, 1969, when Pierre Trudeau’s Liberal government passed the omnibus bill that legalized abortion in Canada, over four million children have been killed in the womb in Canada, she pointed out.

“Whether named or unnamed, the 4 million who have been killed since May 14, 1969, Canada’s Day of Infamy, were real human beings, not just numbers, or hypothetical humans,” Luetke wrote.

“They were real, and now they’re gone.”

“These children should have been protected, their parents offered better. For 50 years our country has failed them, and while we work to end this injustice, we will also be sure not to forget a single one of its victims.”

Moreover, in those 50 years, the situation has only worsened.

Canada has no law restricting abortion, and Prime Minister Justin Trudeau is pushing his father’s legacy to an extreme.

Among other things, Trudeau has banned anyone with pro-life views from running for the Liberal Party, earmarked $650 million to promote abortion in developing countries, and required that employers applying for Canada Summer Job grants sign an infamous pro-abortion “attestation.”

The Liberal government forced PEI to provide abortions on the island, and most provinces now provide women the abortion pill for free.

Moreover, anyone who witnesses publicly — in politics, on social media, in the workplace, on the street — that human life is sacred from conception to natural death faces increasing hostility.

“Not only do all of these attacks threaten the very lives of the preborn, but they also threaten the ability of the pro-life movement to fight back,” observes Luetke.

“It is quite possible that in the future, we won’t even be allowed to publicly espouse pro-life sentiments.”

However, Campaign Life Coalition is resolved to the course.

“This 2019 March for Life, we march in promise not to stop until we end Canada’s abortion legacy,” wrote Luetke.

Campaign Life Coalition “has been fighting harder than ever to fill Parliament with more pro-life representatives” and has “spoken out against every attempt to silence us, and opposed every effort to shove abortion into every last nook and cranny of this world.”

But Campaign Life “cannot do it alone,” Luetke emphasized.

That’s particularly the case for the National March for Life.

“We need as many people as possible to show up on Parliament Hill, the doorstep of our federal government,” she said.

“Join us in our promise to claw our way to the day when Canada is known worldwide not as a harbinger of death, but as a bringer of life.”

For more details on the May 9 March for Life in Ottawa, go to MarchforLife.ca.

And please share the LifeSiteNews video to promote Canada’s March for Life and raise funds for Campaign Life.