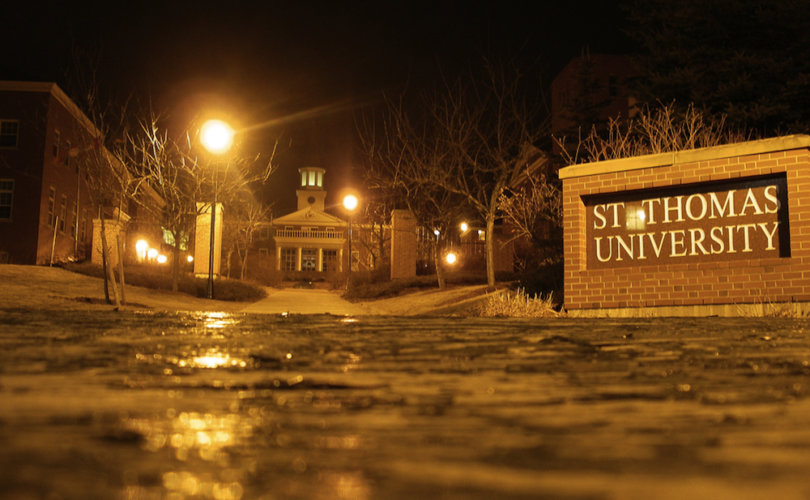 FREDERICTON, New Brunswick, February 13, 2017 (LifeSiteNews) – Students at the St. Thomas University will soon be entitled to the abortion drug Mifegymiso under their health plan.

The student newspaper Aquinian reported that the board of directors of the Catholic school’s health provider, Campus Trust, voted in late January to provide coverage of Mifegymiso for a $5-co-pay.

The drug combination will similarly be available to students at 11 other Canadian colleges, with a total enrollment of 40,000, that are part of Campus Trust. Coverage will begin with the 2017 academic year in September.

Philippe Ferland, vice president of the St. Thomas Students’ Union, told the Aquinian, “This doesn’t act as a loophole here in New Brunswick, but in terms of being able to afford an abortion, it makes it easier to pay.”

Mifegymiso is the market name for a two-drug cocktail that was approved by Health Canada in 2015 but has experienced several delays in becoming available. The first drug is Mifepristone. Administered via injection, it is designed to starve unborn babies to death quickly by cutting off the supply of progesterone in a mother’s womb. The second is Misoprostol. Taken orally from one to two days later, it expels the baby’s corpse from the womb.

Despite the fact that provincial health plans provide surgical abortions free and Mifegymiso’s cost is $270, abortion advocates such as Action Canada for Sexual Health and Rights promote the drug.

The organization says it has “the potential to become a solution to the many barriers to abortion that exist in Canada” and “better equalize access for all Canadian women.”

Only one in six Canadian hospitals do abortions, according to Action Canada. The organization attempts to justify the need for the drug by contending that rural women are far from a hospital and that many doctors do not want to perform abortions, especially those with religious beliefs.

In fact, a recent study by the pro-abortion American College of Obstetrics and Gynecology indicates that few OB/GYNs want to do abortions. While 97 percent of those surveyed had been asked to perform abortions, only 14 percent said yes.  Only 18 percent of female doctors and 10 percent of males will do abortions.

However, Mifegymiso cannot provide an easy-access alternative to surgical abortion, complains Action Canada, because Health Canada has put an obstacle in the way. It “has mandated onerous training requirements for physicians and pharmacists to prescribe and dispense the drug. Such requirements will likely mean poor take-up amongst a wide swath of physicians and pharmacists.”

Marie-Claire Bissonnette of the Campaign Life Coalition said there is a reason for Health Canada’s precautions.

“The reason why the drug combo took so long to be approved by Health Canada is because it’s not safe and thousands of women have suffered adverse side effects and dozens of women have died from it,” Bissonnette said. “They’re putting the convenience of students before their health.”

“The [Student] Union speculates [about] raising the student fees, and no doubt this will happen because of the pill’s high cost,” Bissonnette added. “The school might in fact make money off this, though, because it’s forcing every student to pay for a non-medically necessary drug that only a certain amount of students will use.”

Bissonnette asked, “What if students who acknowledge that the pill kills an unborn child don’t want to pay for it? To use some pro-choice rhetoric, this goes against their ‘freedom to choose.’ I certainly wouldn’t want my money going to abortions.”

Veronique Taylor, a spokesperson for the New Brunswick Health Ministry, told LifeSiteNews, “The Government of New Brunswick is currently looking at ways to make Mifegymiso available free of charge to all who need it once it becomes available in the province.”

St. Thomas University was founded by the Catholic Church. However, the school does not prominently mention the connection on its website. It identifies itself as “a small, primarily undergraduate university dedicated to excellence in liberal arts.” However, its chancellor is the bishop of Saint John, Robert Harris.