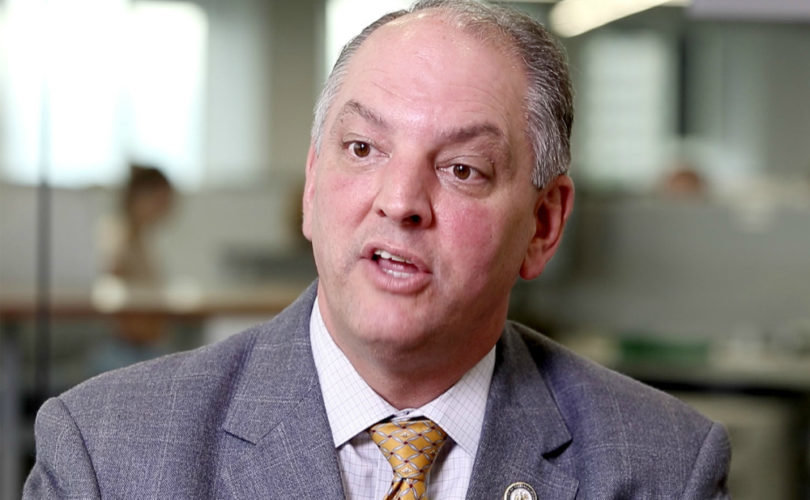 BATON ROUGE, Louisiana, November 23, 2015 (LifeSiteNews) — An eight-year old prostitution scandal and an unpopular incumbent has given the Louisiana governor's mansion to a Democrat over pro-life stalwart Senator David Vitter.

The victory was a surprise to most observers, given the state's conservative tilt. One key factor was Governor-elect John Edwards' focus on Vitter's 2007 prostitution scandal — a factor that didn't hurt the senator in his 2010 re-election race, but was harped on by Edwards throughout the campaign.

In 2007, Vitter — who made his name in state politics on a pro-family platform — admitted to using a government cell phone to meet with prostitutes years earlier. Edwards used this to call the favored candidate a hypocrite, which seemed to resonate with voters.

While the state's leading pro-life group thanked Vitter “for his unwavering dedication to the defense of human life,” Louisiana Right to Life also said that Edwards “had a pro-life voting record” when he served in the state legislature.

Edwards had a rating of 100 percent for life in 2014 and 2015. However, he has had generally low grades from the Louisiana Family Forum, and earlier this year skipped a social issues forum to hold a fundraiser at a strip club. Additionally, an analysis at The American Thinker provided two examples of when Edwards' record was concerning to pro-life advocates.

Specifically, in 2006, Edwards said that “Abortion is the freedom of choice, between the appropriate parties and their higher power,” according to OnTheIssues.org. Additionally, while Louisiana Right to Life “elected not to score…[a] vote due to confusion in the legislative body about the issues at hand,” Edwards was criticized by the group for an amendment that attempted to weaken a bill that would protect the consciences of all health care service workers. The amendment “prevented employees of private institutions from having their conscience rights protected when it came to refusing to engage in actions such as abortion,” according to the pro-life group.

“In addition, the amendment removed the conscience rights protections, regardless of in the private or public sector, for the following activities: 'artificial insemination, sterilization, artificial reproductive technologies, and fetal experimentation.'”

Earlier this year, the Louisiana legislature blocked a bill that would have prevented state officials from punishing those who believe marriage is only between a man and a woman. Edwards said in a statement that the bill was “very broad,” and that the legislation — which Governor Jindal made into law via Executive Order — needed adjustments.

Edwards claims he “wholeheartedly support[s] religious freedom and adamantly oppose[s] discrimination.” Separately, Edwards said that he personally opposes redefining marriage, but that it is now a “settled” issue.

Under incumbent Bobby Jindal, Louisiana has been ranked the number one pro-life state in the nation by Americans United for Life. Despite his prostitution scandal, Vitter was widely supported by pro-family and pro-life candidates due to his leadership on marriage and life in the U.S. Senate.