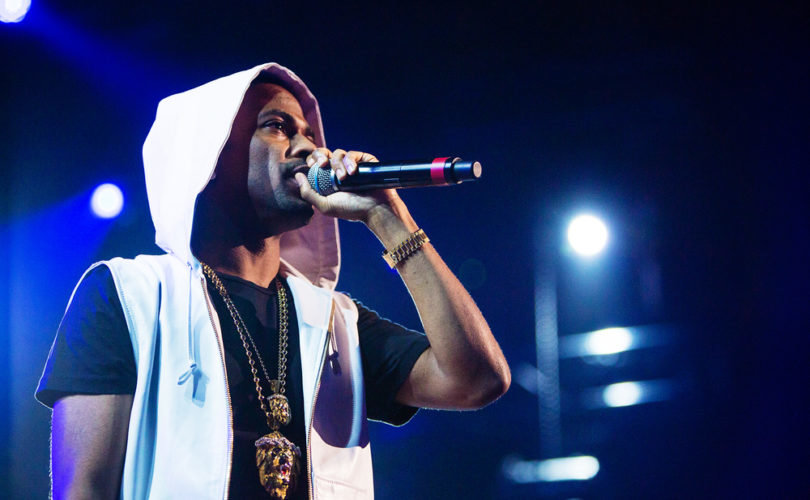 While Free the Children aims to be an advocate for women’s rights worldwide, thousands of students attending the charity’s popular ‘We Day’ in Toronto this October will witness a performance by a rapper whose profanity-laden repertoire is riddled with songs that portray women as “b*tches” and “whores” whose only value lies in pleasuring men.

American hip-hop recording artist Big Sean is most famous for his 2011 hit “Dance A$$,” which includes lyrics too sexually graphic and offensive to print here.

The music video shows the rapper goading multiple women as they give him lap dances and perform sexualized movements in front of him. (WARNING graphic content: Read the full lyrics of “Dance A$$” here.)

“Dance A$$” is not an isolated instance of Big Sean’s wordsmith talent. Every one of is songs reviewed by this reporter includes explicit mentions of sexual promiscuity, prostitution, pimping, rape, oral sex, condom use, cheating, name calling, taking God's name in vain, and illegal drug use.

It is not known at this point which songs Big Sean will perform in Toronto. The event is catered towards students aged 12 and older because of “language used and themes discussed,” organizers say.

We Day founders Craig and Marc Kielburger wrote in their 2011 “Mother's Day Manifesto” about their “fierce feminist resolve.” LifeSiteNews asked Marc Kielburger by email and phone if Big Sean represented the values of his organization, but did not receive a response.

LifeSiteNews brought Big Sean’s lyrics to the attention of We Day organizers, asking if the rapper’s treatment of women is something they want We Day participants to emulate.

Spokesperson Angie Gurley responded by email: “As usual, you have twisted and misrepresented the facts. Your interpretation of what is happening at We Day is incorrect. We will have no further comment.”

The announcement of Big Sean as an entertainer at the Toronto event comes one month after LifeSiteNews reported on Free the Children defending one of its high-profile Toronto-based managers who moonlighted as a stripper in a homosexual-themed sex-show troupe.

The manager, who spoke frequently at schools and led youth trips overseas, resigned two weeks later. Free the Children sent out a statement on his behalf lamenting the fact that he had to resign and defending his work with the troupe.

‘Karma is real’ – Big Sean at We Day California

This is not Big Sean’s first time performing at We Day. In the March 2014 We Day in California, Big Sean sang for and spoke to over 16,000 participants.

“Karma is real,” he told them, according to a report on WeDay.com. “How you act and treat people will come back to you.”

The rapper entertained the crowd with his hit “Beware,” a song about a man who cheats on his girlfriend and then wonders why she ends their relationship.

“And I never cheated (I mean, maybe once, twice), One time don't change everything, She ask why I don't feel the same, I'm still the same,” Big Sean raps.

If Toronto’s We Day numbers are anything like the 2012 event at Air Canada Center, then about 20,000 youth can be expected to show up.

Other performers in upcoming Canadian We Day events include Macklemore, whose hit rap “Same Love” was used to support the successful legalization of gay “marriage” in Washington state in 2012, and J Cole, whose rap music includes elements similar to Big Sean’s rap.

Parents say they are outraged that Big Sean has been invited as a role model to an event aimed exclusively at school children.

Parent John Pacheco, who blogs at Catholic-Legate.com, told LifeSiteNews that the invite indicates a “massive moral vacuum” among the top leadership of the organization.

“Moral vacuums are not left unfilled very long, and when they are filled in this culture, they are filled with sexual filth. We're tired of this garbage. When will the adults stand up?”

Ottawa parent Andy Pocrnic called it “incredibly poor judgment” for Free the Children to bring in the rapper.

“Big Sean's dehumanization of women, treating them as objects rather than as human beings with dignity, should have been enough to disqualify him from their event,” he said. “Instead, he is going to be presented as a role model to impressionable students. The leadership at Free the Children continues to hit new lows. Why any school board would permit their students to attend these events is difficult to understand.”

“Does Free the Children really believe that a profanity-laced rapper who exploits women is an appropriate performer for school children?” said Jack Fonseca of Campaign Life Coalition.

Fonseca said school boards, especially Catholic ones, should need no further evidence to end their partnerships with the organization.

Gwen Landolt, national vice-president of REAL Women of Canada, told LifeSiteNews she was “horrified” to see Big Sean presented as a role model for students.

Landolt called Free the Children an “extremely dangerous organization” for leading huge numbers of young people into a “total wrong understanding of life and dignity of human beings, respect for others, and multiculturalism.”

“These cherished values are tossed out the window by this organization endorsing someone like Big Sean. The young people are left with the message that they can use anybody as an object to pursue their own self-interest. This is an extremely dangerous message for young people,” she said.

“What is going on with this organization?” she continued. “They’re not freeing the children. They’re tying them up in knots and hindering them from having a fulfilled and happy life.”

We Day: ‘To make the world a better place’

Free the Children, founded in 1995 by the Catholic Kielburger brothers, aims at activating young people to fight poverty and injustice in developing nations. Their ‘We Day’ events now take place annually in major cities in Canada, the US, and the UK, bringing together thousands of school-aged young people in stadium-sized events. The young people come prepared to listen to inspiring messages from internationally famous humanitarians, social justice workers, and music stars.

It’s a “concert, featuring icons of social change, hometown heroes and some of the hottest musical entertainment on the planet,” states We Day’s website.

We Day’s goal is to bring youth together “to make the world a better place.” Students earn their way to the event by completing one local and one global social justice project of their choice, though suggestions are provided.

Though Free the Children is heavily promoted in Canadian Catholic schools, critics have pointed out that the Kielburgers’ flavor of social change is not in line with Catholic social teaching.

The brothers faced criticism in 2011 for backing Planned Parenthood’s “reproductive rights” agenda after Canada’s federal government threatened to defund the third world work of the abortion giant. In 2012, the brothers refused to take a public position against abortion, stating at that time, “We’ve just personally chosen not to take a stance on that.” It was only last October that the organization came out saying that it does not officially “endorse” abortion. However, Free the Children’s overseas clinics stock and provide contraceptives and offer “family planning” sessions.