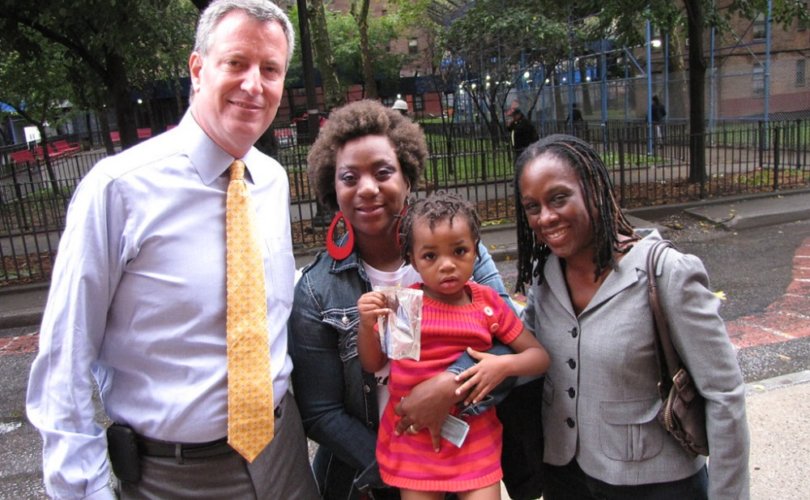 But despite sponsoring a poll in which the public awarded the most votes to Saint Frances Xavier Cabrini, the Big Apple’s own patron saint of immigrants, McCray, 64, refused to include the saint among the seven leading ladies of New York.

To put this into perspective, Mother Cabrini founded an order of nuns and 67 charitable organizations.

Author and retired newsman Don Surber quipped on his webpage that “once again Democrats show that they think men are better at being women than women are.”

“Saint Frances was born in northern Italy. She became a nun and moved to America to tend the needs of Italian immigrants. She became a citizen at 59 in 1909. She died in 1917 and was canonized on July 7, 1946,” he wrote.

“What a remarkable inspiration she is a century later. Democrats could not care less,” he continued.

“They keep telling us how much immigrants mean to the country. Well, here is a woman who came to America and reached the heights. Literally. No mortal can go higher than a saint. But Democrats passed her over in favor of seven others[.]”

Public art historian Harriet Senie, a member of the panel that collected the poll results, told Hyperallergenic, an online arts world newspaper, that “[t]he whole process” of choosing the women to be honored “was a charade.”

“The committee came up with five suggestions, all of them groups of women with the express intention of changing the existing paradigm of memorials. We were very clear and unanimous about that.”

Senie called the choice to honor individuals instead of groups of women “an outrage.”

The New York Post reported that other New York women who were top picks on the poll were also rejected. They were Emily Warren Roebling, who took over from her ailing engineer husband to lead the completion of the Brooklyn Bridge, and pianist Dr. Janet D. Schenck, who founded the Manhattan Music School.

The “She Built NYC” project began last summer when New York’s first lady asked the public to weigh in on which female figures of New York’s history are most worthy of honor. According to the Post, more than 1,800 suggestions were made, including nominations for 320 women.

“Cabrini — who was known as Mother Cabrini and whose remains are entombed in a shrine at the former Mother Cabrini HS in Washington Heights — got 219 votes, which was tops,” the Post reported.

McCray then assembled a panel to review the poll and make its own suggestions. However, she and former deputy mayor Alicia Glen made the final decision, choosing four people who were not nominated in the poll: jazz singer Billie Holiday, civil rights activist Elizabeth Jennings Graham, abortion “rights” activist Dr. Helen Rodriguez Trias, and Rivera.

The other three are Congresswoman Shirley Chisholm, heroic lighthouse-keeper Katherine Walker, and Johnson.

All but one of the New Yorkers chosen, Walker, are African-American or Hispanic.

In 1979, Chirlane McCray published an essay in Essence entitled “I am a Lesbian,” an article the magazine later heralded as “groundbreaking” in that an African-American woman had been so candid about her own homosexuality. Nevertheless, McCray married Di Blasio in 1994, and they are the parents of two children.