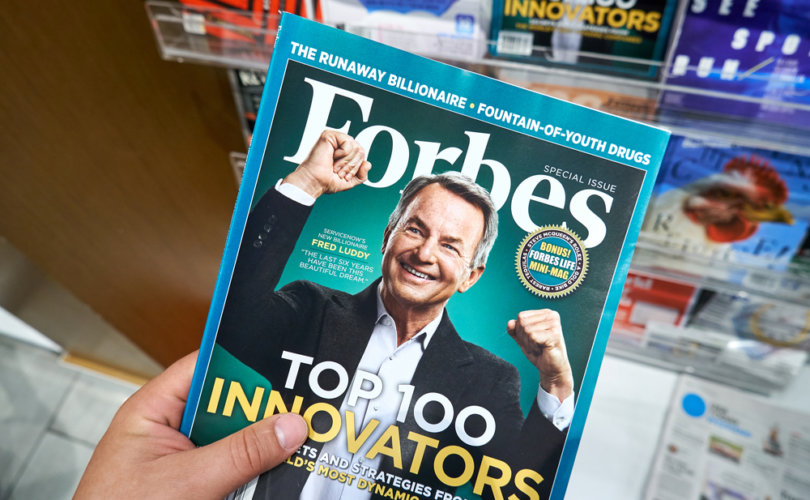 WASHINGTON (LifeSiteNews) — A longtime Forbes contributor said he has been pushed after eight years of writing columns due to pressure from the National Institutes of Health (NIH).

“The National Institutes of Health … top executives wrote an email to myself and Randall Lane, the top content officer at Forbes, it was couched as a corrections [and] they quibbled about small things in my column but that was the excuse that Forbes used to cancel the column,” Adam Andrzejewski told Tucker Carlson on February 14.

Andrzejewski is the CEO and founder of Open the Books, a government transparency organization.

He is now listed as a “former contributor” on the Forbes website. He said he has written 206 columns over an eight-year period for the business news publication.

It also reported on the household income of the Fauci family, which includes his wife Christine Grady, the NIH’s chief bioethicist. Within a day of the email, Andrzejewski’s editor at Forbes said he could no longer write about Fauci.

“You describe the whole point of journalism is to tell people what their government which they pay for which claims to represent them is actually doing,” Carlson said in response. “I just I think it’s a shocking story I really do.”

The government transparency advocate said other voices that are not approved by the “organs of state authority” are in a similarly precarious situation when they report on people in power.

“Today, if you are an independent voice, outside of the organs of state authority, you are in jeopardy. I am an example of this,” Andrzejewski told the New York Post. “My column at Forbes became an example of that.”

Neither Forbes nor the NIH responded to multiple requests for comment on the allegations made by Andrzejewski.

LifeSiteNews emailed Amanda Fine, Renate Myles, and Emma Wojtowicz, public relations officials with the NIH, but did not receive a response to two emails sent in the past week.

Further reporting can be found at OpenTheBooks.com.