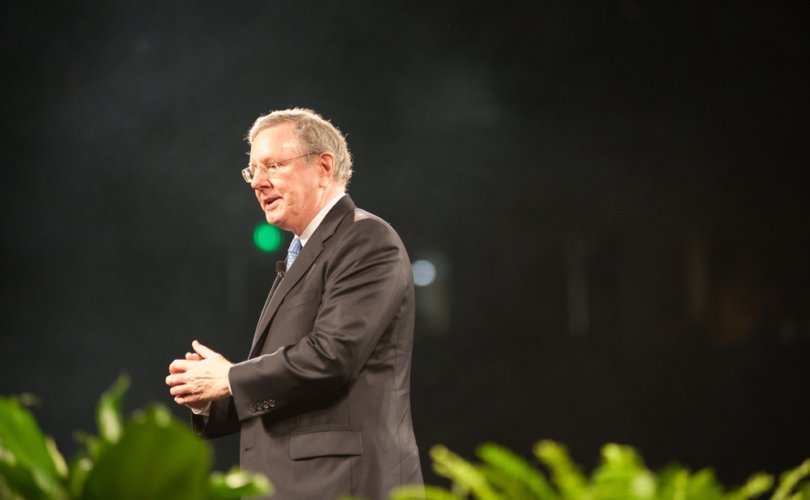 (LifeSiteNews) — In a viral video the editor-in-chief of Forbes magazine blasted the Biden administration’s COVID-19 jab mandate for businesses, predicting the rule will get thrown out by the Supreme Court “and rightly so.”

Steve Forbes, the grandson of Forbes’ founder and the present-day editor-in-chief of the business magazine, made the comments in a brief video posted to YouTube November 9. The three-minute segment, part of a “What’s Ahead” series, has already generated over a million views since it was published just a week ago.

In the video, Forbes laid out a concise argument against the Biden administration’s broad mandate, which uses the Occupational Safety and Health Administration (OSHA) to force employers to require their workers to get the experimental COVID-19 shot or else submit to wearing a face mask and participating in frequent testing.

“Politics, not public health, is the dominating factor here,” Forbes said, arguing that the federal edict, which would impact some 84 million Americans, “would set a dreadful precedent.”

Forbes also pointed out that the requirement fails to recognize natural immunity to the coronavirus, which “countless physicians have” recognized “is upwards of 27 times more potent than the vaccines themselves.”

Noting that “the Fifth Circuit Court of Appeals has temporarily blocked Biden’s sweeping mandate,” Forbes predicted that “the Supreme Court will throw out this executive order, and rightly so.”

On November 6 the U.S. Court of Appeals for the Fifth Circuit temporarily stalled the jab mandate just two days after it was released, with the court rejecting an appeal from the federal government to lift the stay over the past weekend, citing “serious constitutional concerns.”

If enacted, the rule would penalize noncompliant businesses with fines ranging from over $13,000 to more than $136,000 for repeat violations, while workers who refuse to comply would face termination.

“Such a sweeping order would set a dreadful precedent,” Forbes said, pointing out that allowing the government to bypass typical legislative processes by implementing invasive policies through bureaucratic regulatory agencies could open the door to a slew of other unpopular top-down restrictions.

“For instance, what would stop future decrees banning or limiting the consumption of sugar sodas like Coca Cola and Pepsi in the name of fighting the scourge of obesity?” Forbes asked.
“Not to mention severe limitations on chips or other junk food? Or a virtual prohibition of cigarettes which bring on cancer, heart disease, and other deadly ailments?”

Noting that Biden announced his intention to impose the mandate back in September, and that even if upheld would not take effect until next year, Forbes argued that the federal government cannot claim it is responding to an emergency.

“The administration says the president has the right to issue emergency orders. But an emergency applies to a sudden catastrophe, which was the case when the pandemic burst forth last year. The word emergency doesn’t apply here,” Forbes said. “After all, the president made his announcement a little more than two months ago. Only in recent days did the administration get around to issuing the actual order, which runs 490 pages, and that order doesn’t take effect until January 4 of next year, almost two months from now.”

“The economy is already beset with labor shortages and serious supply chain disruptions,” Forbes continued, suggesting that the White House chose to set the deadline for the “emergency” requirement after the holidays because it “took to heart warnings the firing of noncomplying workers would exacerbate an already bad situation in the crucial holiday season.”

“The news is full of stories of similar decrees leading to the loss of critical healthcare workers, police officers, and firefighters, not to mention needed people in numerous other industries,” Forbes said.

Earlier this month, at least 26 New York City fire stations were forced to shut down after the city’s vaccine mandate caused a massive staffing shortage in the department, while police departments across the country have been faced with the choice to either enforce the mandate and fire their highly-trained and necessary law enforcement staff – putting communities at risk of criminal activity – or loosen up the jab requirements.

Nurses and other healthcare professionals have also been at the forefront of COVID-19 jab mandate refusal, with thousands of crucial personnel being terminated for refusing to get the shots after being hailed as heroes earlier in the pandemic.

Meanwhile, Forbes observed in his video message that the Biden mandate, if upheld, has the potential to impact more than just the employees of large companies.

“Also worrying in those 490 pages, is the call for comments on making Biden’s diktat be made mandatory for all private sector companies, not just with those with 100 or more employees,” he said.

The Biden administration’s emergency #VaccineMandate could be expanded in the future to employers who have fewer than 100 workers.

Critics say the regulation is government overreach and outside the authority of #OSHA. https://t.co/DP7zAQu6z1

Finally, Forbes observed that the sweeping bureaucratic mandate “takes no account of those who already have had COVID-19.”

“Countless physicians have pointed out that the immunity acquired here is upwards of 27 times more potent than the vaccines themselves,” he said, adding it’s “no wonder” that the Fifth Circuit Court “has taken a dim view of the order and its rationales.”

Many doctors have demonstrated that early treatment of COVID-19 with safe and effective therapeutics has sharply reduced COVID-related mortality, blowing apart the narrative that vaccination is the best or only way to deal with the risk posed by the coronavirus.

“Too often, the whole vaccine campaign this year has taken on the attitude, more of a: ‘get it or else attitude’ instead of one of patient persuasion,” Forbes said, adding that “the legal challenges will soon reach the Supreme Court, which will likely follow the lead of that appeals court.”

“Perhaps then the government will undertake the hard work of calmly, carefully answering the questions of skeptics,” Forbes said.