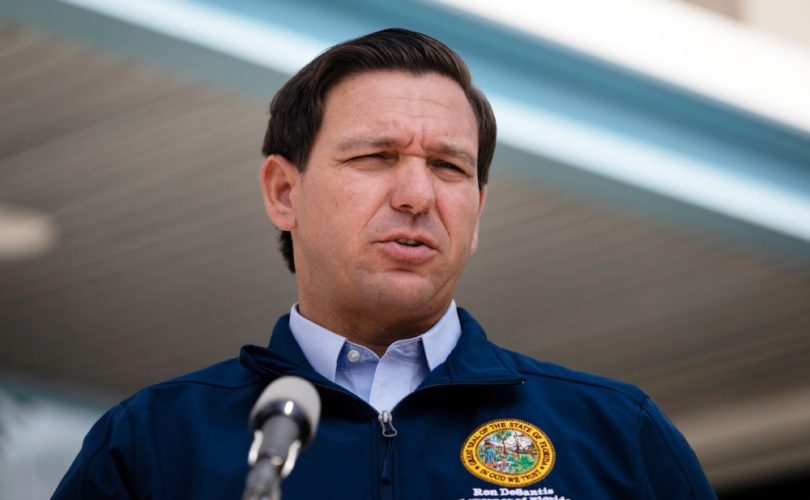 TALLAHASSEE, Florida (LifeSiteNews) — The Florida Department of Health (FDOH) under the leadership of firebrand Republican Gov. Ron DeSantis fined one Florida county more than $3.5 million after it ran afoul of state law by requiring municipal employees to present proof of having received an experimental COVID-19 drug as a condition of employment.

We must protect the jobs of Floridians and preserve the ability of Floridians to make their own decisions regarding what shots to take.

After mandating hundreds of employees get the abortion-tainted injections and firing 14 who refused to comply, Leon County, home to the state capital of Tallahassee, was found to have violated S.B. 2006, which prohibits requiring proof of vaccination in the state of Florida.

Signed by Gov. DeSantis in May, the law makes it illegal for government entities in the state to require so-called “vaccine passports,” and threatens $5,000 in fines for each violation.

“In Florida, your personal choice regarding vaccinations will be protected and no business or government entity will be able to deny you services based on your decision,” DeSantis said upon signing the legislation.

This month, Leon County was determined by the FDOH to have violated the “personal choice” of Floridians by enacting what the state has called an “illegal employee vaccine mandate”  in late July requiring 714 municipal employees to present proof of vaccination by October 1.

In response, the state issued the county a $5,000 fine for each violation, coming to a total financial penalty of $3.57 million.

The FDOH announced the action October 12 after sending a notice of violation to the county administrator on October 6 just days after the noncompliant employees were fired.

Here comes the hammer: Leon County has been notified of a $3.75 million fine for violating @GovRonDeSantis‘ ban on vaccine mandates: pic.twitter.com/pj8WknleeW

“It is unacceptable that Leon County violated Florida law, infringed on current and former employees’ medical privacy, and fired loyal public servants because of their personal health decisions,” Gov. DeSantis said in response.

The move to issue financial penalties to Leon County comes hard on the heels of a decisive victory for DeSantis over a northern Florida city that had also attempted to force its employees to get the jab in violation of state law.

Last week, the FDOH threatened to fine the city of Gainesville millions of dollars for its vaccine mandate for city employees.

Facing steep fines, the college town backed down, telling the health department late last month that there are currently “zero employees who are subject to a City COVID-19 employer vaccination requirement.”

“Please be advised that on September 23, 2021, the City Commission of the City of Gainesville took action to rescind their August 5th action related to COVID-19,” city manager Lee Feldman wrote, adding that the vaccine rules “have been voided.”

In its October 12 press release, the FDOH cited the Gainesville case, noting that while Leon County chose to defy state law and has subsequently been hit with financial penalties, Gainesville opted to forgo the fines and void its mandates.

“While Leon County has broken the law and received notice of a multi-million dollar fine, other local governments have reversed course,” the statement read. “Last week, after alerting the City of Gainesville of their possible violation of the vaccination passport ban in Florida, the Florida Department of Health received a response indicating the City of Gainesville rescinded its employee vaccine mandate.”

The press release also noted that Gainesville’s backtracking came after the Eighth Judicial Circuit Court issued a temporary injunction siding with the state of Florida against Gainesville to block vaccine mandates for city employees.

News of the fines levied against Leon County come amid increasingly successful efforts by Republican governors and legislators to block vaccine mandates and vaccine passport schemes.

“No entity in Texas can compel receipt of a COVID-19 vaccine by any individual, including an employee or a consumer, who objects to such vaccination for any reason of personal conscience, based on a religious belief, or for medical reasons, including prior recovery from COVID-19,” the order states.

In announcing the order, Gov. Abbott reiterated his view that the jabs “should always remain voluntary and never forced.”