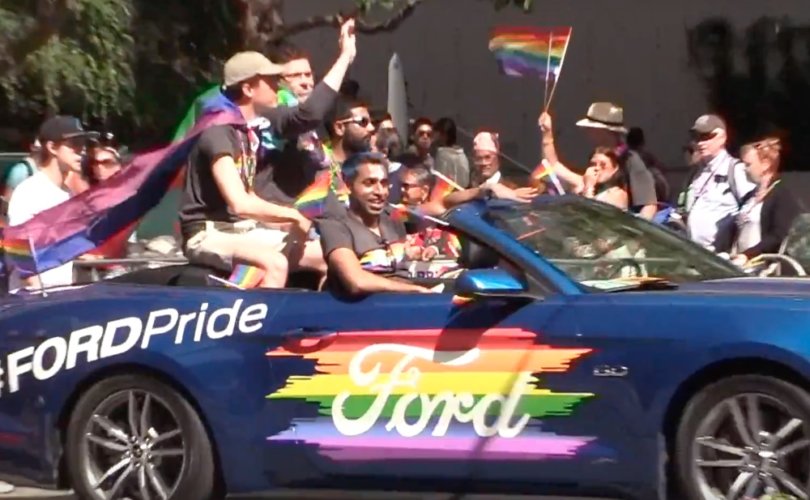 A custom vehicle at the 2018 San Francisco "Pride" Parade.YouTube screenshot

January 10, 2019 (LifeSiteNews) – A man who worked as a contractor at a Ford Motor Company plant in Michigan claims he was fired last fall solely for a respectful comment challenging transgender ideology on a social media post celebrating another employee’s “gender transition.”

In October, Michigan pro-LGBT media outlet PrideSource published a profile on Lynn Keiser, a homosexual male research engineer at Ford attesting to the company’s wholehearted support for his “transition” to female.

“While looking at Ford I was thinking about whether I could transition, and I found they scored a perfect 100 on the Human Rights Campaign’s Corporate Equality Index,” Keiser said, going on to explain how his supervisor “didn’t bat an eye” and his human resources manager was “equally supportive.”

This week, another man who worked as a contractor at Ford’s Automatic Transmission Operations building in Livonia, Michigan, told PJ Media that he lost his job as a direct result of commenting on an internal company post celebrating Keiser. “Human beings are male or female, the socio-cultural reality of gender cannot be separated from one’s sex as male or female,” wrote the man, who wishes to remain anonymous at this time.

He says he had hoped to spark a conversation among the almost-uniformly favorable responses to the story, but the company instead “saw my comment as intolerant and at odds with its progressive ideologies.”

“Ford said that because of my comment and the intolerance that it represented (or so they accused me of) that my services to them would cease immediately,” the man claims. “I was told this in an unscheduled 1 on 1 meeting with my boss and an HR representative. I was told to pack up my belongings immediately, to leave my badge and computer, then I was walked out of the building like a criminal.”

He admits “in hindsight it is easy to say it was unwise” to publicly dissent from the prevailing dogma on the subject, but “I had no way of knowing this would be the outcome beforehand (…) If Ford does have a policy on such issues, I am not aware, nor was I made aware during my time there.” He added that he “was not given a warning of any sort.”

In response, Ford spokeswoman Karen Hampton told PJ Media that the ex-worker in question “was not an employee of Ford Motor Company and it would be inappropriate for us to comment,” beyond a claim that, generally, “employees are not fired solely as a result of comments made.”

The man explained that he was technically paid by The Productivity Team (TPT), but he was fully integrated into Ford’s employee systems. He had a Ford employee ID number, access to the automaker’s intranet, answered directly to a Ford employee, and, most important, was fired by Ford, not TPT.

TPT also rejected PJ Media’s requests for comment, saying only it did not speak publicly about current or former employees. Neither company answered whether they specifically welcomed employees who disagree with transgenderism.

“I strongly feel that I've been persecuted for my moral values on this issue,” the former employee lamented, arguing that his original post was also an act of compassion for gender-confused colleagues. “The greatest kindness one can render to any man is leading him to truth,” he said, quoting St. Augustine.

“You’ll find diversity at every level of the company, from the boardroom to the design studio, from the plant floors to the engineering centers,” the auto manufacturer’s “Diversity and Inclusion” page boasts. “Ford’s senior executive leadership team fully endorses this model and takes great pride in celebrating our workforce that reflects the society in which we live and work.”

In 2015, another Michigan-based former Ford contractor named Thomas Banks told LifeSiteNews he was fired for criticizing the company’s embrace of same-sex “marriage,” despite making the comments in response to a Ford request for feedback on the issue.