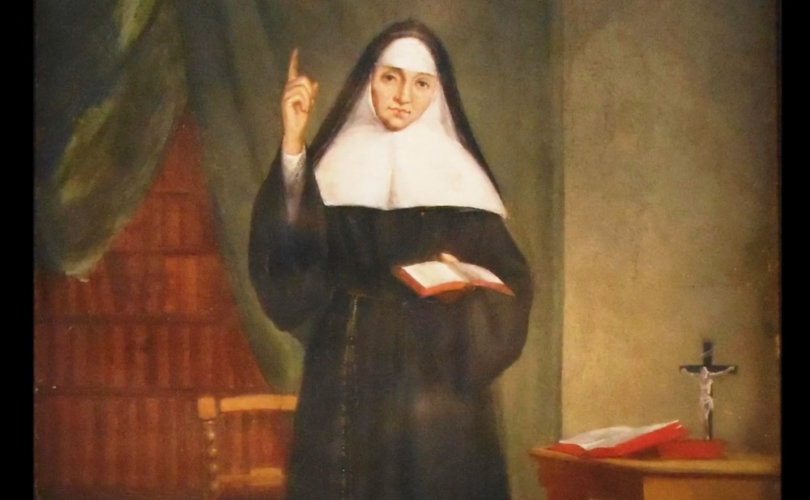 Image of Mother Marie of the IncarnationYouTube screenshot

In May 1639, six nuns set out from France to serve the Aboriginal people in Canada, three to build a hospital and three to build a school. In July, three Ursuline sisters arrived in Quebec, led by Mother Marie of the Incarnation, to set about establishing a school for girls.

According to Inuk: Au Dos De La Terre, by Father Roger Buliard O.M.I, Inuit tribes often killed, or left to die, newborn girls as they struggled to survive Canadian winters. The tribes valued boys since they were stronger for hunting. The more mouths they had to feed, the harder it was to survive. Girls were viewed as less desirable than boys. Therefore, the nuns’ establishing of schools provided an important opportunity for young, Aboriginal girls to learn skills to flourish.

The early Catholic nuns received no compensation but freely and lovingly taught, washed, dressed, and fed the young Aboriginal female students. Mother Marie studied the Algonquin, Huron, and Iroquois languages and then wrote dictionaries and catechisms to better educate her students.

A private donor first lent the sisters a small house with only two rooms where they established the first Canadian school for both French and Aboriginal girls. By 1641, the school had grown, and the nuns required a new building to house the ever-increasing number of students.

One night, a fire broke out in the monastery, destroying nearly ten years of work in only a few hours. However, the sisters determined to rebuild the school.

Mother Marie recalled: “We are in the dark here, and we must grope around for our way. We consult wise persons, but things do not turn out as foreseen. We roll along, however, and when we think we are at the bottom of the precipice; we find ourselves standing upright.”

The love of the Ursuline Sisters for Aboriginal children

Recounting the devotion of the sisters in the New World, Jesuit Recollections recorded: “Difficult as it is to find, among the laity, girls provided with good endowments to maintain the Seminary for Savages established at Kebec, under the management of the Ursuline mothers, it would be as easy to find professed Nuns quite willing to cross the Ocean to devote their lives to the salvation of these poor children.”

“And if as great a number were required as that of the Virgins whom Saint Ursula led into Brittany, I think that France could supply them, such are the zeal and ardor that prevail in all their houses,” the account continued. “Not only the Ursulines, but a great many other Nuns, of various orders, burn with a most pure desire to come and consecrate their labors to Jesus Christ in this new world, and to consume their lives on the Altar of the Cross.”

“Having chosen her to establish the Ursulines in Canada,” the Bishop of Quebec wrote of Mother Marie, “God gave her the full spirit of her Institute. She was a perfect superior, an excellent Mistress of novices, capable of undertaking any religious enterprise. Her exterior life, simple and well-disciplined, was animated by an intense interior life, so that she was a living Rule for all her Community.”

“Her zeal for the salvation of souls, and especially for the conversion of the Indians, was great and so universal that she seemed to carry them all in her heart,” he added. “We cannot doubt that, by her prayers, she greatly called down God’s many blessings upon this new-born Church.”

Students’ experiences at the Ursuline schools

According to the Jesuit Relations, the Mother Superior recalled: “We frequently hear with pleasure (…) chanting a motet in the Nuns’ Choir, during the elevation of the Blessed Sacrament, and even singing with them sometimes during their Vespers.”

Even before education, the goal of the Mother Superior was “to write upon their hearts the Love and fear of him whom they now know. It is to that end that the efforts of these good mothers are directed, to whom our Lord seems to have given his blessing.”

She recalled that two Aboriginal children left the school to accompany their families on “their great hunt.” The two girls taught their families to pray and sing “the hymns that the mothers had taught them in the Algonquin tongue.”

“The leisure that they had from their slight occupations, they spent in reading and writing,” she continued. “The (students) are so passionately fond of writing that sometimes, when they are refused permission to go out walking, they ask to be at least allowed to write.”

“These two poor little girls, who were out hunting with their people, felt so keen regret at being so long deprived of the Sacraments of Confession and Communion, that they manifested their sorrow by means of letters replete with affection and piety, which they wrote while away in the woods,” she added.

One time, an Aboriginal girl decided to leave the school and return to her family as the girls had the freedom to leave if they so desired. However, this girl soon regretted her decision and “begs to be (re)admitted.”

“I was solicited to leave you,” she said; “I did wrong. I will never run away again; I will be obedient. I really wish to be taught.” The girl was readmitted into the school and allowed to continue her education.

Another Aboriginal girl expressed gratitude to the sisters for her education, writing, “[m]y good Mother, I am about to leave. I thank you for having taken such care of me, and for having taught me to serve God well. Do I thank you for a trifling matter? I shall never forget it.”