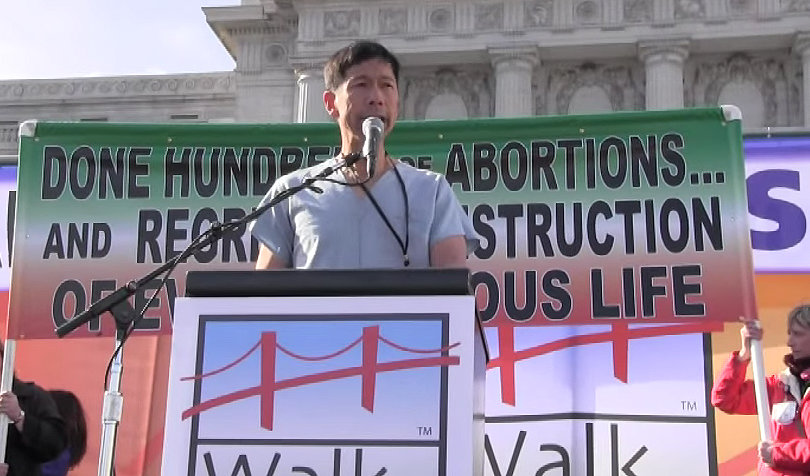 Dr. Vansen Wong, a former abortionist, now works at a pregnancy center as their medical director, performing ultrasounds, and speaks to groups about his experience and conversion story.

October 12, 2016 (LiveActionNews) — Dr. Vansen Wong began performing abortions back in the 1990s when a co-worker asked if he could help out with the procedures in their Ob/Gyn office. Wong agreed and went on to perform abortions in the evenings, making money to help pay off some bills. Over seven years, he aborted hundreds of preborn children before having a change of heart and mind.

“I wanted to be an advocate for women, someone who wouldn’t be judgmental to a woman who’d already made her decision,” said Wong in a speech on September 30 at St. Louis University (SLU).

“These women would say, ‘it’s not the right time’,” Wong said.

At the time he was an atheist, but when a patient died after a hysterectomy, he began searching out God and attending church services. Then one day, his pastor began speaking out about partial-birth abortion, and it got Wong thinking.

“Maybe God is telling me abortion is wrong,” said Wong. “It crept in – the realization that every person is created in God’s image.”

Wong walked away from performing abortions, but he still deals with the aftermath of his decisions, including the fact that two of his own children were victims of abortion.

“Now I’m trying to come to terms with two events I wish had never happened, and I suppressed their memories for so long,” he said. “I had to seek some help from close friends who were skilled in post-abortion counseling to come to terms and ask forgiveness from God.”

Today, Wong works at a pregnancy center as their medical director, performing ultrasounds, and speaks to groups about his experience and conversion story.

In 2012, he spoke at San Francisco’s Walk for Life, telling the crowd, “Abortion is barbaric, abortion is intolerable. Abortion has no place in any civilized society.”

He hopes that our civilized society will soon end abortion. Last month he told students at SLU, “Your generation truly can reverse abortion. I hope together we can change this culture. I would hope as you think about abortion, maybe you will think about it a little differently, maybe more personally. What can we do as individuals to help change the approach in our society?”