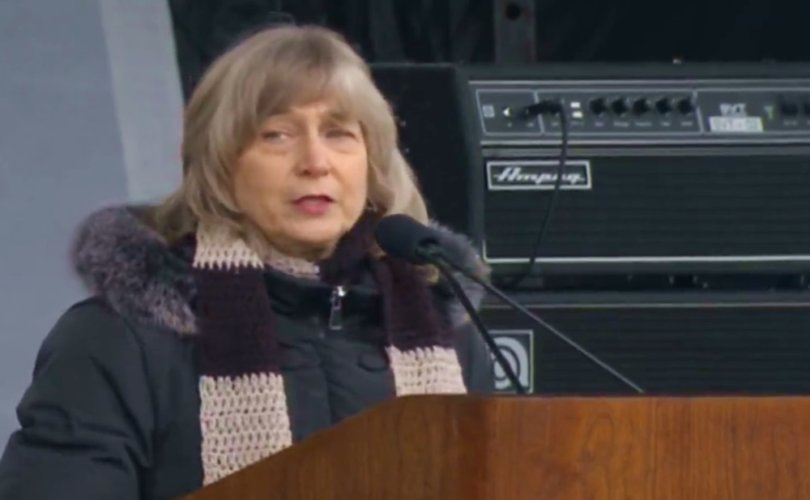 WASHINGTON, D.C., January 18, 2019 (LifeSiteNews) – A former abortionist told a massive crowd at the 46th March for Life in Washington, D.C. today that the pain of post-abortive women needs to be acknowledged.

“A woman cannot kill her child and remain unscathed,” said Dr. Kathi Aultman. “There are millions of women in the United States who have had abortions. Some of you are here.”

She added that post-abortive women are hurting and need pro-lifers' help and compassion.

“They need to hear that God wants to heal and restore them,” she added.

Aultman's journey from abortionist to advocate for the unborn was one of many stages and hampered by her position as a doctor.

“I used to feel that abortion as a woman's right,” said Dr. Kathi Aultman. “This belief became strengthened when I became pregnant and made the decision to have an abortion, a decision I terribly regretted later.”

Aultman revealed that the medical establishment, especially medical departments involved in women's health, is deeply biased on the side of abortion.

“Medical students and residents are taught that abortion is a normal part of women's health care,” she said. “The pro-life view is discouraged.”

According to Aultman, it is difficult for pro-life students to get into medical school and residencies, especially obstetrics and gynecology (OBGYN).  Medical professors can lose their positions if they express pro-life opinions.

“ACOG, the American College of Obstetricians and Gynecologists, who should be the most pro-life, are staunchly pro-abortion,” Aultman revealed. “All OBGYN residents are required to do abortions unless they opt out because of conscience. But that is discouraged, and we need to protect those civil rights.”

Aultman said that she became a doctor to help people, and she was concerned for the women on whom she performed abortions, but she never considered what the baby was experiencing.

The first time Aultman felt qualms about doing abortions was during her neo-natal rotations;  then she was trying to save babies of the same gestational age as the babies she was aborting. But it was the birth of her own daughter that stopped her from killing any more unborn children.

“I finally made the connection between 'fetus' and 'baby' and could no longer do abortions,” the doctor said. “The fact that the baby was unwanted was no longer reason enough for it to be killed.”

Aultman's conversion was far from complete, however. Believing the lie that having a baby out of wedlock inevitably destroyed a young woman's life, she continued to refer for abortions. However, the doctor's view changed when she noticed that young mothers thrived in comparison to their bereft sisters.

“I noticed that those who kept their babies did well in contrast to those who were dealing with the physical and psychological consequences of abortion,” she said.

“My perspective was challenged as I watched children in my church who were almost aborted grow up.”

Finally, friends shared literature with Aultman that brought her to a pro-life position. She advised her hearers that language can either hide or reveal the truth about unborn human life.

“It's much easier to accept 'terminating a pregnancy' than it is killing a baby,” she observed.

“A pregnancy is not a person; it's the medical condition of the mother.”

Aultman asked her listeners to “help people see that what's in the womb is a person with their own unique characteristics and potential, not just a blob of tissue.”

Finally, she thanked the massive crowds for their activism.

“Thank you for protecting those who cannot protect themselves,” Aultman said, “those who wouldn't have a chance to live if you did nothing.”