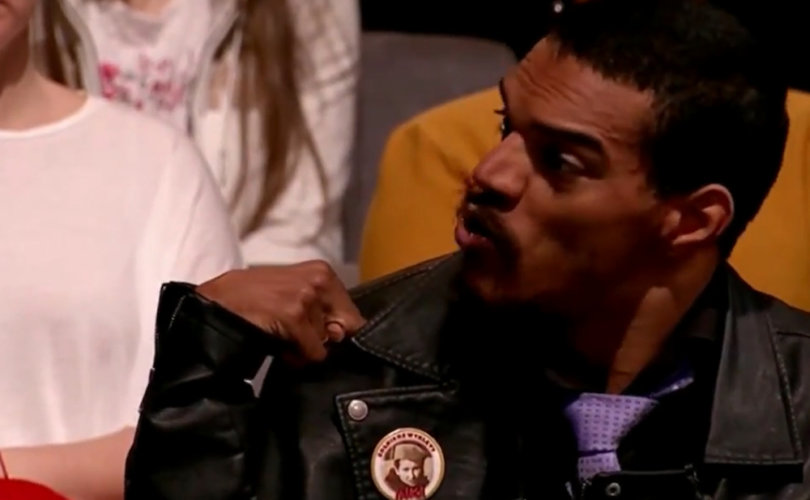 November 22, 2017 (LifeSiteNews) — Black Polish citizen Bawer Aondo-Akaa is suing Guy Verhofstadt, a liberal politician from Belgium and a former Prime Minister who claimed that 60,000 fascists, Neo-Nazis and white supremacists participated in an Independence Day march in Warsaw on November 11.

Bawer Aondo-Akaa, Ph.D, who participated in the march, is a well-known pro-life activist of Nigerian descent who is always ready to defend the unborn and discuss the issue with the opponents. Recently, feminist and leftist politician Blanka Rudy viciously attacked his disability on Facebook. Aondo-Akaa, who uses a wheelchair, is not easily discouraged, though.

So when Verhofstadt, now a member of the European Parliament, brought up the Independence March, he was looking for trouble. The march had taken place just days before, and Verhofstadt decided to weigh in on a heated and ideologically driven debate on the rule of law in Poland.

Verhofstadt said “60,000 fascists marched in the streets of Warsaw, Neo-Nazis, white supremacists, and I am not talking about Charlottesville, in America, I am talking about Warsaw, Poland, at 300 more or less km of Auschwitz.”

Apparently with these inflammatory words Verhofstadt wanted to score some points, but he missed the point altogether. He commented on a demonstration that brings together former combatants who fought against Nazi Germany in the Second World War. He spoke about a popular event for many people whose family members were murdered in German concentration camps. He also talked about a demonstration full of Polish flags and banners reading “Armia Krajowa,” Poland’s wartime Home Army, one of the largest resistance movements in occupied Europe. And finally Verhofstadt commented on a family event where young and old are brought together to commemorate Polish history.

Not surprisingly, Verhofstadt’s representations caused justified fury, particularly in Poland, but also anywhere where Polish people either live or are known for their opposition to both Nazism/Fascism and Communism.

Furthermore, he probably was not aware that contrary to the United States, where Neonazis can legally march, it is illegal to promote Nazism/fascism or any other totalitarian regime in Poland. Waving related flags is also banned. The Polish authorities have identified a small number of marchers with potentially illegal content, and they could face up to two years in prison.

Aondo-Akaa, who took part of the Independence march, could not believe his ears when he heard Verhofstadt’s comments, televised all over the world. He did not see a huge number of fascist, Neonazis, and white supremacists. He told popular Polish internet service Onet.pl that he saw only a “few Neo-Nazis with disgusting messages.” He added that “if Mr. Verhofstadt calls us all Neo-Nazis, when he wasn’t at the march, and did not see either who was there, he is not telling the truth.”

Aondo-Akaa explained that Verhofstadt’s reaction “was a generalization and all generalizations are harmful.” He accused Brussels elites of not only wanting to destroy Poland culturally but also of wiping out Polish traditions and ideas. Independent Poland does not fit into their Europe, he concluded.

Aondo-Akaa often openly declares that he is Polish and loves Poland. He decided to sue Verhofstadt for defamation. His lawyer, Jerzy Kwaśniewski, wrote on Twitter that Ordo Iuris will provide legal assistance for “Bawer Aondo-Akaa PhD, Polish Human Rights champion, ambassador of the UN Convention on the Rights of Persons with Disabilities.”

Bawer Aondo-Akaa PhD, Polish Human Rights champion, ambassador of the UN Convention on the Rights of Persons with Disabilities, decided to sue @guyverhofstadt for defamation, after he called participants of the Independence March “neo-nazis”.@OrdoIuris provides legal assistance pic.twitter.com/juRQpFTRBQ

Kwaśniewski explained that Verhofstadt might have to be stripped of his immunity in order to be sued. Taking him to court either in Poland or in Belgium is also an option.

Other people also want to initiate legal action against the Belgian. Among them are the organization Reduta Dobrego Imienia (anti-defamation.pl), and Mira Wszelaka, whose family members suffered in the German concentration camps.

According to the agency Kantar Public, almost 70 percent of Polish people do not believe that there were 60,000 Nazis marching in Warsaw, 12 percent had no opinion, and only 11 percent agreed.