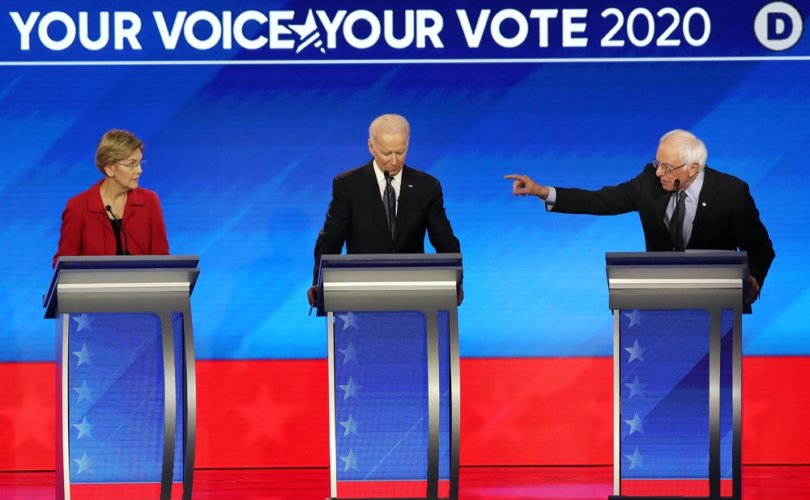 February 10, 2020 (LifeSiteNews) – Long-term Democratic Party strategist and political commentator James Carville has accused the party of losing its mind in an interview with Vox, slamming the party for getting “distracted” by woke issues and leftist causes, rather than the issues that voters actually care about.

Carville, who was the lead strategist during Bill Clinton’s successful 1992 presidential campaign, spoke to Vox following an appearance last week on MSNBC, where he slammed the Democrats for their chaotic mismanagement of the recent Iowa caucus.

The 2020 Democrats are all virtually in lockstep on social issues: they support taxpayer-funded abortion on demand and the homosexual/LGBT cause. At least two candidates – Sen. Elizabeth Warren and Pete Buttigieg – list their gender pronouns in their Twitter bios. The latter is in a same-sex “marriage.” Warren says she will let a gender-confused child vet her nominee for Secretary of Education if she wins.

Former Vice President Joe Biden has said he would direct the Justice Department to “do everything in its power” to block state laws that place any restriction on abortion, including parental notification requirements, ultrasound laws, and waiting periods. Meanwhile, Sen. Bernie Sanders has threatened that he would “use the Department of Justice to go after those states” that restrict abortion “in every way that I legally can.” Every Democrat candidate has also pledged to nominate pro-abortion judges to the Supreme Court and federal bench.

In an expletive-laden interview, Carville urged his fellow Democrats to focus on “building coalitions to win elections” and on becoming “a majoritarian party.”

Carville wants the presidential candidates to move away from talking about issues such as “open borders and letting prisoners vote,” saying that “[m]ost of the people aren’t into all this distracting s***.”

Carville said that the Democrats have “one moral imperative here, and that’s beating Trump. Nothing else matters.” But at this stage he is not optimistic about their ability to do that.

“We have to beat Trump. And so far, I don’t like what I see. And a lot of people I talk to feel the same way.”

Later in the interview he said: “We can’t do anything for anyone if we don’t start there [beating Trump in this year’s presidential election] and then acquire more power.”

Carville identified the key divide within the Democratic Party as being between people who think “there’s a real yearning for a left-wing revolution in this country” and people like himself who are focused on “building coalitions to win elections” and listening to what people think and “framing your message accordingly.”

“We have candidates on the debate stage talking about open borders and decriminalizing illegal immigration,” Carville lamented. “They’re talking about doing away with nuclear energy and fracking. You’ve got Bernie Sanders talking about letting criminals and terrorists vote from jail cells. It doesn’t matter what you think about any of that, or if there are good arguments — talking about that is not how you win a national election. It’s not how you become a majoritarian party.”

“Bernie Sanders isn’t a Democrat,” he said. “He’s never been a Democrat. He’s an ideologue.” Nevertheless, Carville insists that he will vote for Sanders in the presidential election if he wins the Democratic nomination. But he says that if that happens then the Democrats will have no chance of gaining power in the Senate.

Asked if Sanders could win the presidency, Carville responded:

Who the hell knows? But here’s what I do know: Sanders might get 280 electoral votes and win the presidency and maybe we keep the House. But there’s no chance in hell we’ll ever win the Senate with Sanders at the top of the party defining it for the public. Eighteen percent of the country elects more than half of our senators. That’s the deal, fair or not.

So long as [Mitch] McConnell runs the Senate, it’s game over. There’s no chance we’ll change the courts, and nothing will happen, and he’ll just be sitting up there screaming in the microphone about the revolution.

Carville opined that Warren “gets distracted and loses her core anti-corruption message” when she supposedly follows the advice of her aides to adopt “left-wing” positions.

He also blames Biden for preventing other potential “mainstream” candidates such as Cory Booker from gaining more support. He said: “And then Biden gets in and blocks out good candidates like Cory Booker or Michael Bennet or Steve Bullock by occupying this mainstream lane. There just isn’t enough oxygen and they couldn’t get any traction. But these are serious people, professional people, and they could’ve delivered a winning message.”

When the interviewer suggested to Carville that due to the supposedly right-wing bias of the media it was difficult for Democrats to get their messaging to Americans, Carville responded:

I think the other side wants us to think there are no swing voters, that we’re doomed and it doesn’t even matter if you have a message because you can’t reach anyone. I think that’s bullshit. I think that’s a wholly incorrect view of American politics. But look, if no one’s persuadable, then let’s just have the revolution.

Falling into despair won’t help anyone, though. I mean, you can curse the darkness or you can light a candle. I’m getting a f*****g welding torch. Okay?

And does he think any of the Democrat candidates still in the race for the nomination could beat Trump?

“I don’t know, I just don’t know. I’m hoping that someone gets knocked off their horse on the road to Damascus.”