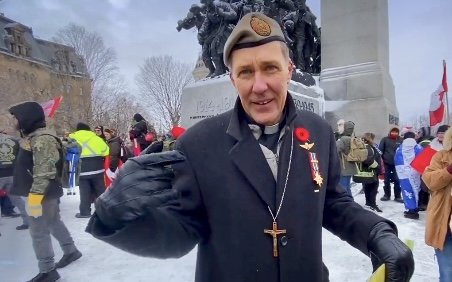 OTTAWA (LifeSiteNews) – A Canadian military veteran spoke to the Post Millennial and described the peace-loving atmosphere in Ottawa over the weekend, saying “it was as if the Lord … put a hedge of angels” around the demonstration.

A veteran describes how peaceful the freedom protest in Ottawa has been: “I don’t know why the Prime Minister’s not here with us, standing with us, saying ‘Isn’t it great that we’re united?'”

The man did not identify himself, but he was wearing Canadian Armed Forces attire and said he had received a Chief of the Defence Staff Commendation, which is a reward given to members of the military who go “beyond the demand of normal duty.”

“It is remarkable to see how peace and nonviolence” is present at the demonstration, he said.

He called out the mainstream media for saying “bad things” had happened at the protest, given the peaceful nature of the event.

“On any normal day in Ottawa, when you’ve got tourists, you’d have much more poor behaviour,” he said.

He said the event had “united Canadians in a reasonable, peaceful, legal way,” and for the first time in a while “it has made us feel proud about what we stand for.”

“I don’t understand why the Prime Minister is not here with us,” he said.

He said he wrote a number of Members of Parliament thanking them for supporting the convoy, and that he put on his commemorative poppy for the first time in a long time given how proud he feels again about being Canadian.

He also called into question the rhetoric that Justin Trudeau has used to describe truckers and their supporters. Having spent time “overseas” ministering to soldiers and burying dead Canadian soldiers who fought actual terrorists, he expressed that the words of the Prime Minister were misplaced. “Here I am being implied that I’m a terrorist?”

In spite of Trudeau’s out of touch descriptions of the patriotic movement, the veteran concluded by saying that this is “the proudest” he has been since “standing at the grave of our Canadian forces who have died for freedom.”