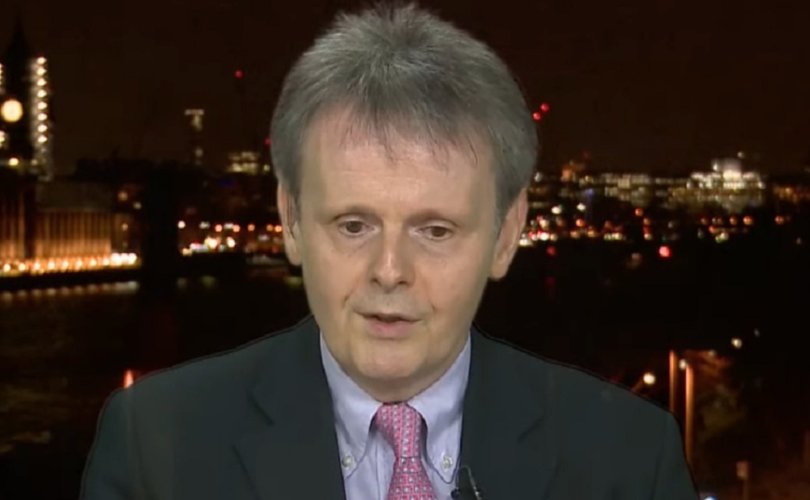 Damian Thompson in an interview with Raymond Arroyo.EWTN / YouTube

Damian Thompson, of late the former editor-in-chief for the Catholic Herald, said certain parts of the document are “garbage” and that given some elements involved in the forthcoming Pan-Amazon Synod, the assembly should be called off.

Thompson was asked his thoughts on the October synod by Raymond Arroyo on a recent broadcast of EWTN’s The World Over, along with his reaction to the recent near forced abortion of a 22-week British baby, the latest in the Church’s clergy sex abuse scandal, and other hot-button issues. He gave uncompromising responses on all.

The Amazon Synod’s controversial working document, or Instrumentum Laboris, aside, many fear that the synod is being used as a vehicle for abolishing the discipline of priestly celibacy and for ushering in female priests, using the remoteness of the region, its indigenous customs, and its religious practices as a rationale.

Asked in particular about criticism of the Synod’s working document from dubia cardinal Walter Brandmüller, Thompson said Brandmüller’s critique was powerful and well written, and that the cardinal made many brilliant points.

Brandmüller strongly criticized the Vatican’s working document in late June, saying it was “heretical” and an “apostasy” from Divine Revelation, and called upon Church leaders to “reject” it with “all decisiveness.”

He zeroed in specially to concur with one aspect of Brandmüller’s critique: the document’s inference that the Catholic Church could learn something from the Amazonian rainforest.

“The point I really liked in Cardinal Brandmüller’s document was his criticism of the way that the forests of the Amazon region are being viewed by the Vatican working document as a special source of divine revelation,” Thompson said, “which was my reaction when I read this garbage.”

“It reads like a sort of P.C. Disney production,” Thompson said. “Avatar written by octogenarian European socialists: ‘Tell us, oh wise ones, what the spirits of the forest are telling us.’”

Thompson went on to pan the document’s “patronizing liberal sanctification of indigenous religion” and noted how Austrian Bishop Erwin Kräutler, main author of the working document, has publicly opposed criminalizing infanticide in the region, in the process lauding LifeSiteNews’s Maike Hickson for revealing the information.

In her coverage of the synod, Hickson discovered that Kräutler, a proponent of married and female priests, had written a 2009 statement about the problem of infanticide among the native tribes in the Amazon region.

The bishop had openly rejected the thought of the state prosecuting such crimes, in favor of “convincing the people, with pastoral patience, that the culturally prescribed death of a child is anachronistic and undercuts their own strategy of life.”

“We have always fought for the physical and cultural survival of the Indians,” Kräutler said, “and we do so on the foundation of the Gospels, and not with help of the gospel of fundamentalism.” He went on rejecting the penalization of infanticide because “here, in the name of human rights and under the pretext of suppressing infanticide, a broad ethnocide, a cultural murder, is being installed.”

Thompson noted Hickson’s work in illustrating this particular disturbing fact related to the synod, saying as well that what she exposed indicates something sinister.

“Now the redoubtable Maike Hickson, who has been doing some burrowing, she’s revealed that he’s come out against criminalizing the infanticide, which is sometimes carried out by some indigenous peoples there,” Thompson stated.

He clarified he didn’t wish to label all people there or say it’s a widespread practice, “but it is a problem there.”

“If that means anything, it means something very sinister,” Thompson told Arroyo.

After discussion of the synod at length, Thompson said, “The whole thing worries me enormously.”

He told the EWTN host he’d visited the Amazon, and in particular a strange religious group. This group was not necessarily representative of the entire Amazon, he said, but religion in all parts of the developing world has syncretism “and therefore [is] not fully Catholic.”

“And to be using this bit of the world as a laboratory for religious experimentation, it beggars belief,” Thompson stated. “And my personal message about the Amazons is, cancel it now.”

The discussion between Thompson and Arroyo also touched on Pope Francis’s plans to change part of the English translation fo the Lord’s Prayer, part of the clergy sex abuse scandal, the ban of the traditional Latin Mass by the head of the Knights of Malta, and also a judicial decision in late June in Britain that a mentally disabled woman, the adult daughter of a Nigerian Catholic, should be forced to abort her 19–week–old child. The decision was subsequently overturned in the Court of Appeal.

Thompson spoke out strongly against the slow response of the Catholic bishops of England and Wales in the matter.

“The Catholic world was unbelievably horrified by this,” he continued.

Madame Justice Nathalie Lieven’s decision was pronounced on a Friday, and Thompson said Catholic anger grew over the weekend, especially in the U.S. However, protest was lacking in one quarter.

“All weekend I waited for the Catholic Bishops of England and Wales to say something,” the then-Herald chief told Arroyo, “and nothing was said.”

Thompson said he watched the Twitter feed of the Catholic Church in England and Wales all weekend but saw nothing there but “P.C. witterings.”

“So the Catholic Herald stepped up to the plate and asked the bishops speak,” he said, “emphasizing how horrified Catholics were around the world.”

On the following Monday morning, a junior bishop named John Sherrington did release a statement, but Thompson found it lacking.

He said it was summed up “beautifully” by Catholic Herald columnist Tim Stanley, who tweeted, “We note with regret that Jesus Christ has been nailed to a cross. Our thoughts and prayers are with his family at this time.”

“That’s the impression that it made,” Thompson said.

He believed that a little righteous anger would have been appropriate, given that the ruling horrified even non-Catholics.

“And where were the celebrations when this murder, this execution, was overruled by the Court of Appeal?” Thompson asked.

“I’ve spent 30 years watching these bishops do nothing,” he added.

Thompson said that even an orthodox bishop in England never “rocks the boat.” He believes, however, that we are reaching “the pro-life moment” thanks to “atrocities” like the recent radical pro-abortion legislation in New York State and the Lieven ruling.

“I will be free to tell you what I really think”

Thompson announced July 4 on Twitter he was leaving his longtime post leading the Herald, attributing the parting to disagreement between him and the publication’s new owners over the organization’s direction.

Thompson had also been associate editor for The Spectator, a longtime U.K. weekly, and promised additional forthrightness over at the other outlet.

The new owners of the @CatholicHerald and I do not agree on the future direction of the company (for my stance, see @RaymondArroyo’s show last week). Therefore I’m moving to the @spectator where I will be free to tell you what I really think 🙂

He’d become increasingly vocal on social media in his criticism of current Church affairs and the Francis papacy.

Roughly an hour after his announcement, Thompson subsequently tweeted that Pope Francis is “deeply implicated in terrible scandals” and is a “corrupt pope.”

“My first tweet as a free man,” he said. “It’s now obvious that Pope Francis is deeply implicated in terrible scandals.”

“My concern isn’t theological,” Thompson said; “it’s the spectacle of a corrupt pope, something I never expected to see in my lifetime.”

My first tweet as a free man. It’s now obvious that Pope Francis is deeply implicated in terrible scandals. My concern isn’t theological: it’s the spectacle of a corrupt pope, something I never expected to see in my lifetime.

He has continued in his candor since on Twitter.

With Arroyo, Thompson said efforts by Francis to change the Our Father are “entirely unnecessary” and possibly intended to distract people from other things currently going on in the Church.

“I don’t see the need for it,” he said, “and I don't see the academic arguments for it.”

Arroyo asked Thompson for reaction to the return to the Vatican of Argentine Bishop Gustavo Zanchetta, who has been accused of serial sexual abuse of seminarians, and promoted to a new position as a “deputy” and “assessor” for the Administration of the Patrimony of the Apostolic See (APSA), which oversees Vatican assets — with Pope Francis having knowledge of the misconduct allegations.

“There are so many similar questions one could ask about a range of unsavory characters who seem to find sanctuary in the Vatican,” Thompson responded. “And the case of Bishop Zanchetta of course is the most notorious of all of them. I find this deeply troubling.”

“The message this is sending to the faithful is, ‘This is none of your business,’” he said.

This suppression of the traditional Mass is “an absolute disgrace”

Thompson told Arroyo the ban on the traditional Latin Mass within the Knights of Malta announced last month makes no sense, outside being a “victory lap” for Albrecht von Boeselager, the Order’s grand chancellor.

Boeselager’s reign has exemplified intense controversy surrounding the order over the last several years involving a German takeover of the Knights of Malta.

Thompson noted to Arroyo that the grand prior of the English order of Malta, Ian Scott, who had defended the Latin Mass in a letter to the Catholic Herald, was sacked that very day.

“There seems to be another wave of sackings and purges,” he said. “And I wonder whether the Order of Malta really exists anymore, to be honest.”

“As for its suppression of the traditional Mass,” Thompson stated, “it is an absolute disgrace.”