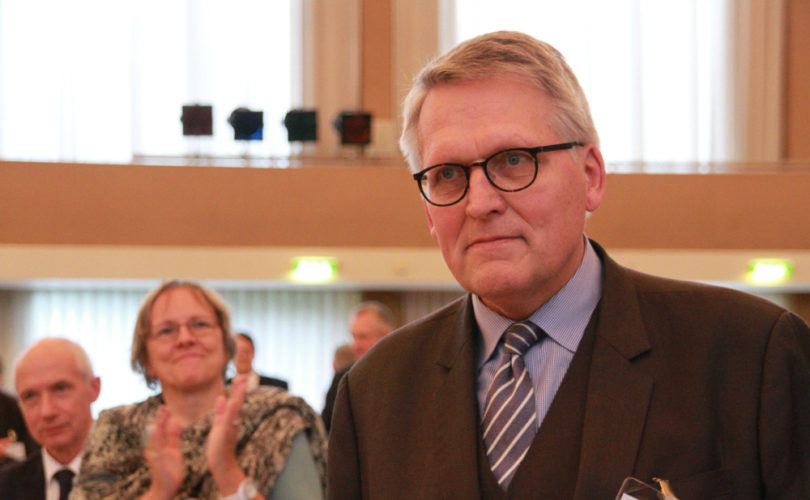 Dr. Thomas Sternberg, the former president of the Central Committee of German Catholics

(LifeSiteNews) – The former co-leader of the heterodox German Synodal Way has revealed the tactics that were used to stop interventions from the Vatican.

In an interview with domradio.de, Professor Thomas Sternberg, the former head of the Central Committee of German Catholics (ZdK), explained how they set up the Synodal Way so that it could not be sanctioned by canon law.

Sternberg, who started the Synodal Way in 2019 with Cardinal Reinhard Marx, said that Cardinal Marc Ouellet, the prefect of the Congregation for Bishops, attempted “to stop the whole thing” in the beginning.

— Article continues below Petition —
Stand with faithful Archbishop Timothy Broglio as the NEW President of the United States Conference of Catholic Bishops!
Show Petition Text
10479 have signed the petition.
Let's get to 12500!
Thank you for signing this petition!
Add your signature:
Show Petition Text

However, in order to prevent the Synodal Way from being shut down immediately by the Vatican, they set it up as a “non-binding discussion process from the point of view of canon law.”

“Schüller, an expert in canon law from Münster, speaks of a nullum,” Sternberg explained. “But only with such a nullum one can actually operate freely. Even the prefabricated critical objections that have been raised in Rome fall flat.”

“I think it shows that it was right not to use a synodal form, which would have been sanctioned by canon law and would then also have given the possibility under canon law to prohibit something like that.”

Sternberg said that he is aware that the “question of the ordination of women or the question of the abolition of celibacy cannot be decided in Germany.”

“But I am a politician to the extent that I know that processes and developments are needed in order to make topics worthy of discussion,” he continued. “… I look at the texts we have now adopted in the synodal journey, the basic text on the subject of women, for example. We have the questions about homosexuality in the Church, we have important questions about clericalism. Basically, these questions have only really been opened up by this Synodal Way, and they are now being discussed internationally, not only in Germany.”

Both the Synodal Way and the ZdK are known for their heterodoxy. The Synodal Way has openly called for changing Church teaching on homosexuality and women priests, among other issues.

Sternberg has defended a pro-abortion group and called on the government to recognize homosexual unions in the past. His successor as president of the ZdK, Irme Stetter-Karp, called for nationwide abortion access in a July 2022 interview.

Furthermore, the ZdK favored blatant abuse of the liturgy when they expressed support for a woman in Switzerland who attempted to concelebrate at a Catholic Mass.