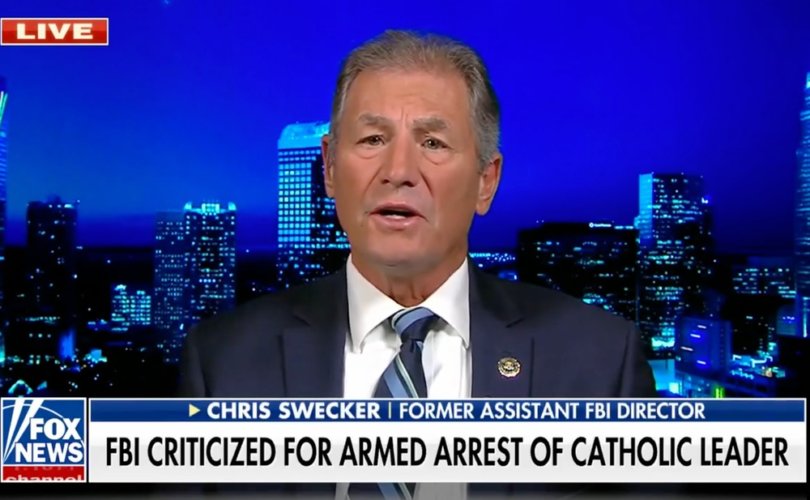 This article has been updated to clarify Chris Swecker’s former role in the FBI.

(LifeSiteNews) — A former FBI executive on Monday joined a growing number of Republican lawmakers in torching the Biden administration’s Department of Justice (DOJ) for sending a team of heavily-armed FBI agents to arrest pro-life Catholic author and speaker Mark Houck in front of his terrified family in a dawn raid Friday.

LifeSiteNews broke the now-viral story, which has dominated conservative media and generated massive backlash from elected representatives who demand the Biden administration answer for the apparent “weaponizing” of the DOJ.

Former assistant FBI director Chris Swecker, who headed up the bureau’s Criminal Investigative Division from 2004-2006 and whose 24-year tenure included time as a SWAT team member, told Fox News on Monday that he couldn’t “see circumstances here that in any way justify the use of a SWAT team for what would ordinarily be a misdemeanor assault, if what is alleged in the warrant is true.”

The FBI arrest of the pro-life speaker came a year after Houck allegedly pushed an abortion facility employee to the ground twice on the same day. Houck’s wife Ryan-Marie said the clinic “escort” had been verbally harassing Houck’s then-12-year-old son while the pair were praying in front of a downtown Philadelphia Planned Parenthood, and that Houck pushed him away to protect the boy, LifeSiteNews reported. Ryan-Marie told LifeSite the clinic worker had not been injured.

Houck’s attorney, Thomas Moore Society VP senior counsel Peter Breen, said that the case against Houck had been thrown out, but the DOJ decided to pick it up in a kind of “political prosecution.”

The DOJ obtained a warrant against Houck under the Freedom of Access to Clinic Entrances (FACE) Act, which makes it a felony to use force to intimidate, injure, or obstruct pro-life or pro-abortion protesters or clinic workers, or to obstruct or destroy abortion facilities or pro-life pregnancy centers.

Ryan-Marie, a homeschooling mother of the family’s seven children, told LifeSite on Friday that as many as 25-30 FBI agents surrounded their home at just after 7 that morning and “started pounding on the door and yelling for us to open it.”

“[T]hey had big, huge rifles pointed at Mark and pointed at me and kind of pointed throughout the house,” she said. “The kids were all just screaming. It was all just very scary and traumatic.”

“So, dawn raid, guns drawn — that is reserved for gang members, for people who are armed and dangerous,” Swecker told Fox News. “And I read the warrant, I don’t see any facts and circumstances that justify that.”

The FBI confirmed Monday in statements to Fox News Digital that the arrest took place and that more than a dozen armed agents went to Houck’s home with guns drawn.

However, a bureau spokesperson and a senior source who spoke with the outlet argued that the armed FBI agents weren’t part of a SWAT team, there were no more than 20 agents present, and that they didn’t point their guns directly at Houck or his family.

Meanwhile, though the FBI decided to carry out a guns-drawn raid to arrest Houck, the agency hasn’t made a single arrest in connection with the spate of vandalism, firebombings, and terroristic threats targeting pro-life centers and churches since the leaked Supreme Court opinion and ultimate overturning of Roe v. Wade in June.

In his comments to Fox, Swecker said the FBI has become a political organization, and that he has heard from “former FBI executives, police chiefs, [and] heads of state agencies who in the past have been big supporters of the FBI who are fairly disgusted with what just happened.”

Swecker said he is “deeply concerned” that the FBI’s apparent weaponization could lead to even more horrific incidents than Houck’s arrest, a warning posed in a Washington Examiner op-ed responding to LifeSite’s reporting about the FBI raid.

Meanwhile, Swecker hasn’t been the only one to speak out about the FBI raid.

GOP lawmakers blast the weaponization of the DOJ against conservatives

In comments made to The Daily Signal on Monday, Republican Rep. Chip Roy of Texas argued that the FBI’s Friday raid “appears to be nothing less than a brazen continuation of the abuse of power by federal authorities against average American citizens that must stop.”

“We owe the American people congressional hearings to provide public and transparent accountability for any and all wrongdoing,” Roy said. “Even further, the FBI needs a complete and total overhaul to return primary law enforcement power to the states and to get the Bureau out of the business of politics once and for all.”

In a Monday post on Truth Social, Arizona Republican Rep. Paul Gosar argued the “FBI has abandoned professionalism and is out of control.”

“We need transparency and accountability. Without both the agency is a threat to American democracy and should be shuttered,” Gosar said.

Pennsylvania Republican Sen. Doug Mastriano, who is running for governor in the Keystone State, also expressed “outrage” at the FBI’s “show of force carried out by the Biden regime against ordinary Americans … ”

In a Saturday statement, Mastriano called the raid “an abuse of power that stands against the fundamental principles on which our country was founded,” and promised that if elected governor he “will not allow the police state of Joe Biden to enforce his persecution against his political enemies on sacred Pennsylvania soil.”

LifeSiteNews also previously reported that U.S. Sen. Josh Hawley of Missouri called on Biden administration Attorney General Merrick Garland to “testify, under oath, before the Senate Judiciary Committee about your selective use and apparent political weaponization of the FACE Act.”

Mark Houck faces felony charges that could lead to up to 11 years in prison and fines totaling as much as $350,000.

A GiveSendGo fundraiser has been set up for the Houck family and has already reached over $250,000 in donations.