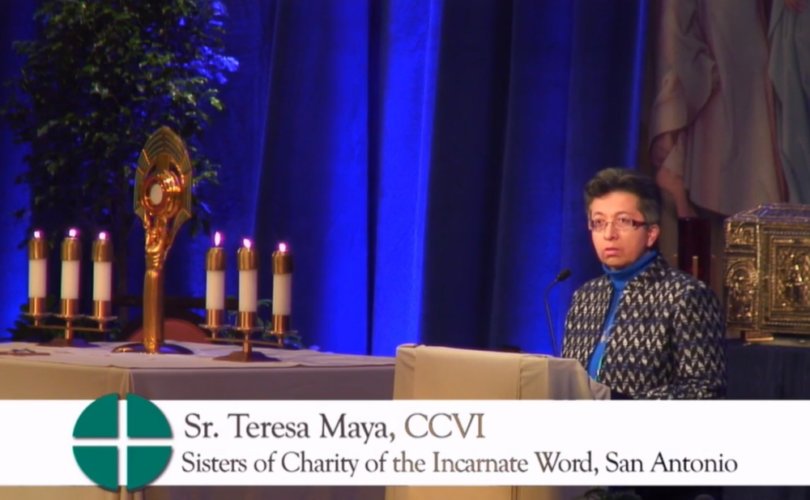 BALTIMORE, Maryland, November 13, 2018 (LifeSiteNews) – Amid heightened calls for accountability in the Catholic Church’s sex abuse scandal and a return to the principles of the faith, the U.S. Bishops hosted the former head of a dissident group of nuns as a speaker at its annual fall meeting.

The U.S. Conference of Catholic Bishops (USCCB) invited the immediate past president of the Leadership Council for Women Religious (LCWR) to offer a reflection during its Day of Prayer on Monday.

The bishops are meeting Monday through Wednesday this week for their Fall General Assembly, the gathering being watched closely for what the Conference may do to address the clergy sex abuse crisis. The meeting comes after months of new revelations about Archbishop Theodore McCarrick’s predation and the Pennsylvania grand jury report’s documentation of decades of abuse in six of that state’s eight dioceses.

In a change from past gatherings, the bishops began the meeting with a Day of Prayer in observance of the clergy sex abuse crisis, for which laity provided varying reflections.

Sister Teresa Maya, Congregation Leader of the Sisters of Charity of the Incarnate Word of San Antonio, Texas and former LCWR president, who still serves as an officer for the LCWR, offered a reflection on “The Bishop as a Minister of Healing” on Monday. The talk drew from St. Charles Borromeo. The bishops focused this portion of their meeting to the topic of “looking at the problem and the harm that has been done.”

The USCCB invitation for Maya to address its assembly follows news earlier in the prior week that Vatican News Service gave laudatory coverage to a pro-abortion religious sister praising the U.S. midterm election results.

That the bishops invited a representative of the dissenting sisters as its speaker was not lost on Jesuit Father James Martin, the editor-at-large of America magazine and Vatican communications consultant who continually challenges Church teaching on homosexuality and floats the notion that the Church could change its posture on that aspect of sexual morality.

“In other words,” Martin tweeted, “the recent leader of the US Catholic Sisters group investigated by the Vatican ten years ago for ‘problematic statements,’ ‘serious theological errors’ and ‘policies of corporate dissent’ will address the US Bishops on the sex abuse crisis.”

In other words, the recent leader of the US Catholic Sisters group investigated by the Vatican ten years ago for “problematic statements,” “serious theological errors” and “policies of corporate dissent” will address the US Bishops on the sex abuse crisis. https://t.co/KQuOJjtT6H

Many Catholics who feel anger over the abuse scandal note that Church leaders have drifted from Catholic principles in recent decades. Their position is that laxity in observance of Church doctrine, liturgy, and devotions corresponds with declining morals and the rise of sex abuse and misconduct.

Michael Hichborn, president of the Lepanto Institute, took issue with the fact that the bishops’ “Day of Prayer” talk – closed to everyone but bishops and presenters – took place in the presence of the Blessed Sacrament, evidenced by the event live feed.

Referencing the alarming announcement made that morning at the meeting that the Holy See directed the U.S. bishops to hold off voting on resolutions to address the abuse scandal, Hichborn posted on Facebook, “So … the bishops apparently are not allowed to vote on clerical sex abuse at the USCCB, per Pope Francis.”

“Ok … so, how about liturgical and Eucharistic abuse?” he asked. “No one should be talking while Our Lord is exposed!”

The LCWR was founded in the 1950’s and officially represents most of the congregations of religious sisters in the U.S. The group underwent doctrinal assessment by the Vatican’s Congregation for the Doctrine of the Faith (CDF) beginning in 2009 over what the CDF saw as the group’s conscious and determined movement away from the basics of Catholicism for more of a focus on radical feminism and New Age ideology.

At issue was the group’s regard for Church teaching on the restriction of ordination to men, the nature of the Church, other religions and Christian denominations, and on homosexuality.

The group openly defied a mandate of reform from the CDF, and the Vatican ultimately ended the intervention early, indicating that reconciliation had been reached with the sisters.

Maya has been an LCWR member for eight years.

During her talk she told the bishops, “Look to your left and to your right; the men of the church need the women of the Church to recreate the Catholic communion.”

LifeSiteNews is continuing to follow the U.S. Bishops meeting and related developments on the ground in Baltimore this week.