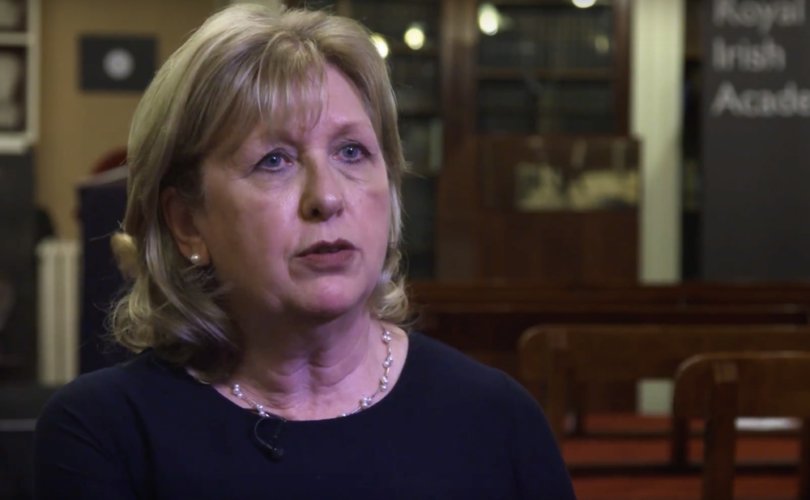 ‘Conscripts’ is a term normally reserved to describe those who are drafted for compulsory military service.

The statement was made by Mary McAleese, Ireland’s President from 1997 to 2011, who has become an outspoken critic of Catholic moral teaching.

“You can’t impose, really, obligations on people who are only two weeks old and you can’t say to them at seven or eight or 14 or 19 ‘here is what you contracted, here is what you signed up to’ because the truth is they didn’t,” said McAleese in a June 23 interview with the Irish Times.

The Catholic Church defends the practice of baptizing infants.

“Born with a fallen human nature and tainted by original sin, children also have need of the new birth in Baptism to be freed from the power of darkness and brought into the realm of the freedom of the children of God, to which all men are called. The sheer gratuitousness of the grace of salvation is particularly manifest in infant Baptism. The Church and the parents would deny a child the priceless grace of becoming a child of God were they not to confer Baptism shortly after birth,” states the Catechism of the Catholic Church.

The Catechism adds that Christian parents recognize that the practice of infant baptism “also accords with their role as nurturers of the life that God has entrusted to them.”

McAleese indicated in the same interview that she would be marching in this Saturday’s Dublin Pride Parade.

The former Irish president also said that she would avoid the upcoming World Meeting of Families — also to be held in Dublin — because its purpose is to reinforce orthodoxy.

McAleese is a dissident Catholic who in the past has been outspoken in her support of homosexuality and women priests, and has criticized Catholic teaching on marriage and family as “homophobic” and “completely contradictory to modern science and to modern understanding.”

In March, McAleese celebrated International Women’s Day by slamming the Catholic Church from across the street of Vatican City — where she’d been banned from speaking — as “one of the last great bastions of misogyny.”

McAleese, who holds a licentiate in canon law from the Pontifical Gregorian University in Rome, railed against the Church in a pre-conference press conference, describing the Catholic prohibition on ordaining women as “codology” not theology, and the Church as a “last bastion of misogyny,” according to a report The Tablet.

McAleese, whose son is openly homosexual, also maintains the Church’s characterization of same-sex orientation as “disordered” can lead to harmful internal conflicts in homosexual Catholics.