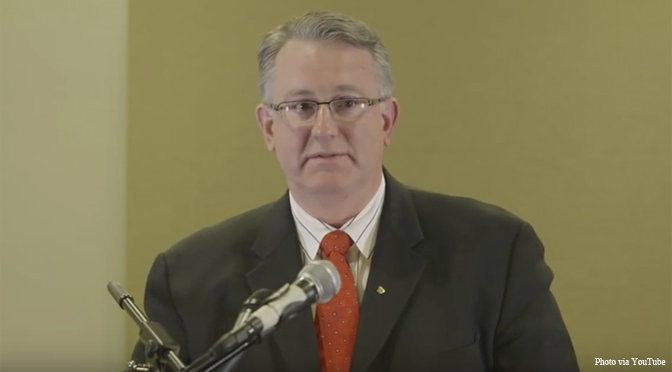 November 2, 2015 (LiveActionNews) — Dr. Anthony Caruso was a leading OB/GYN specializing in in vitro fertilization (IVF) when a series of events cause him to make the decision to leave the industry. Despite the fact that he had created and celebrated the lives of countless children, he could no longer justify the destruction of life that was occurring.

When he first became a doctor, Caruso knew he did not want to perform abortions. He had already experienced having two “casualties of his training in heaven” due to abortion, and it was a procedure he knew he didn’t want to be involved with. He was so against it, in fact, that he left New York because he knew that as an OB/GYN in that state he could be forced to perform abortions.

He moved on to Illinois, where his fellowship days coincided with the beginning stages of the practice of IVF. In a speech for the Pro-Life Action League, Caruso states that back then they would take early embryos and implant them, but that technology and treatments kept advancing and therefore embryos would end up being frozen at later and later stages of development.

“As this was happening, we were beginning to leave these embyros in culture longer and longer,” he said. “[…] we focused on the babies. […] We never really thought much beyond that.”

Despite the fact that he is a practicing Catholic, and that priests had been pleading with him to stop performing IVF, Caruso didn’t consider the lives that were being destroyed in the process or aftermath of IVF, but instead chose to focus on the babies that were being born because of his work. Over time, however, certain events occurred which would alter his perception and forever change his life.

The first event was the Catholic Church’s release of the Dignitas Personae, an instruction on assisted reproductive technology, including IVF. It states that the dignity of every person must be recognized from the moment of conception until natural death. Caruso read the document three times.

Caruso explained that the lab had begun discarding embryos more frequently and becoming more selective of which embryos they were freezing. And the embryos they did freeze were breaking and failing to divide after they were thawed. He told himself that he had to make a change, but the initial change came only in the altering of his website profile, which would now list Natural Family Planning as his speciality.

Then, a same-sex couple came into his practice with what he refers to as “strange demands”. Their requests were so odd that the nursing staff became frustrated and upset. Again, Caruso told himself to leave the practice of IVF.

He began attempting to contact people at different hospitals as his wife wrote to cardinals and bishops seeking help. If her husband left his job, he would need a new one. But no new opportunities were working out.

Then his practice began participating in preimplantation genetic diagnosis, in which they would test the embryos they created for abnormalities. They would keep and implant the unaffected embryos, but would discard those that showed any genetic abnormality as well as those that were considered indeterminate – meaning they couldn’t conclude that the embryo had an abnormality or not. Caruso didn’t want to discard any embryos, but was especially concerned with why they would discard embryos that hadn’t proven to be abnormal.

It was around this same time that Caruso became close friends with an international specialist of reproductive loss. This friend informed him that a certain percentage of those “affected” embryos would have corrected themselves over time. This made Caruso question his career even further.

Then, the final straw, a 42-year-old woman came into his practice. She had never been pregnant, and she had had embryos created and sent off to another office to be checked for abnormalities. Of her 20 embryos, only 1 was considered remotely viable. She had come to Caruso’s office to have that embryo implanted; however, the embryologist who had possession of her embryo had lost it. When that embryologist came in to talk to the woman, he offered no support or sympathy. The woman walked out of the office sobbing, devastated that she would never be pregnant.

Caruso knew then that he had to get out. He had the highest pregnancy rate of anyone else at the lab, but when the university he was employed by lost millions of dollars, Caruso was the first one to be fired since he was the last one to be hired. He still hadn’t found a new job because no one wanted to hire an OB/GYN who wouldn’t provide contraception or sterilization. Still, he was okay with being fired.

“I left there firmly believing that God has shown me this way,” he said. “[…] It’s a harder road going about talking about contraception and IVF because when you talk about it, the first thing they say is, ‘Well it’s kids’, right? […] You need to tell an IVF mother, ‘Bless her children,’ they’re children of God. […] No question about it. […] But how is the mother going to explain to her children, when they come of age, how they came to be?”

And furthermore, Caruso wondered, how would you tell your children that their siblings are frozen?

But the biggest problem with IVF may actually be the way it has altered society’s views on life and the value of each individual person. Caruso refers to a patient who was in preterm labor at 23 weeks gestation. She had a cerclage placed in order to prevent her child from being born too soon, but she asked her doctor to remove it because she felt she could just try again. She was okay with her child dying, because she would be able to do another round of IVF and create another one.

“That’s an attitude that I think is prevalent in the IVF people,” said Caruso. “That this is something that can be manufactured at will.”

Caruso is hoping that in the future, doctors who practice natural family planning will have a broader support network so that they may more easily work together and care for women. Currently there are no support groups for women or children suffering the effects of IVF and there is very little talk in the media about the ethical and health concerns of IVF.