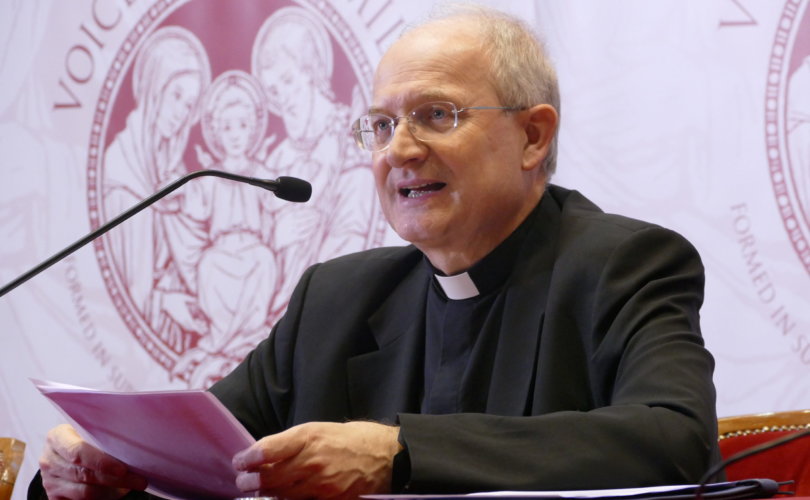 ROME, May 28, 2018 (LifeSiteNews) — Conscience is being invoked today in questions of sexual morality and the defense of life because people aren’t really convinced of these norms, the former president of the John Paul II Institute on Marriage and the Family in Rome has said.

Speaking during a Q&A session at the 2018 Rome Life Forum, on May 18, respected moral theologian Monsignor Livio Melina said: “Sexual morality and life issues have been privatized as though we were dealing with trivial matters. People invoke conscience instead of admitting the grave obligation both to form the conscience, and to admonish those who do harm through errors that are present in their conscience.”

The Rome Life Forum, which gathers pro-life and pro-family leaders from around the world, dedicated the 2018 meeting to the theme of conscience. The choice was inspired by the late Cardinal Carlo Caffarra, who suggested it at last year’s event just months before his death.

At this year’s forum, held at the Pontifical University of St. Thomas Aquinas (Angelicum) in Rome, Msgr. Melina spoke on “Moral conscience and truth in the magisterium of Cardinal Carlo Caffarra.”

Msgr. Melina is a tenured Professor of Moral Theology at the Pontifical John Paul II Institute for Studies on Marriage and Family, where he served as a President from 2006 till 2016.

On September 8, 2017, by papal decree, Pope Francis established a new Pontifical John Paul II Institute for “Marriage and Family Sciences” to replace the previous academic institution founded by Pope John Paul II in 1981. He tasked the new entity with carrying forward the work of the two recent Synods of Bishops and the apostolic exhortation that came from those meetings, Amoris Laetitia.

The decree was issued just two days after the passing of Cardinal Carlo Caffarra, the founding president of the JPII Institute. As a signatory to the dubia given to Pope Francis, Cardinal Caffarra had serious concerns about Amoris Laetitia, interpretations of which he found incompatible with John Paul II’s teachings and the magisterium of the Church.

Here below is a translation of the Q&A with Msgr. Melina at the May 17-18 Rome Life Forum.

Question 1: Does Amoris Laetitia give a reliable summary of the Catholic teaching on conscience?

I believe what is said in Amoris Laetitia is true, but it is partial. And so we need to complete or to clarify, or to interpret or even to correct some, let us say, ambivalent expressions in Amoris Laetitia. These expressions need to be read in light of Veritatis Splendor, which gives a thematic teaching on conscience. Amoris Laetitia was not tasked with clarifying the topic of conscience and so I believe a Catholic hermeneutic has to read the ambivalent or incomplete, or even apparently ambiguous expressions within Amoris Laetitia in light of the encyclical that is of greater magisterial weight than an apostolic exhortation and which is explicitly dedicated to this subject. It has to find its final hermeneutic in the doctrine on conscience contained in Veritatis Splendor.

Question 2: This question comes from Prof. Josef Seifert, who was my professor. How can we reconcile the beautiful reflections on the need to found conscience on the truth with a conscience that obligates and is erroneous in its judgements? This is a difficult question, but I’ll try to respond and see what grade my professor gives me.

When, however, a conscience is in error, but it is not aware of its error, it can be obligated, even though it is in error, to act in a certain manner. When one is aware of the gravity of the action that is being carried out, I believe there is also an obligation to make sure own’s conscience is correct, especially when this would diverge from a constant magisterium of the Church. And therefore I think that an erroneous conscience can obligate and obligates per accidens. It does not lead to performing good actions, but if anything, to actions not guilty. But they could be even more guilty because they are guilty in the cause of the error, and in any case, I think that the value of the two actions are not the same. This is how I would respond.

Question 3: Why is the criterion of the primacy of conscience being used to demolish the norms of sexual morality and the moral and anthropological norms, while it goes unmentioned when speaking about topics such as welcoming migrants, ecology, poverty, immigration where a rigid intransigence reigns.

I think the question already contains the response, but I can expand upon it in this sense. I think that conscience is invoked in questions of sexual morality and the defense of life because people aren’t convinced of those norms. I think they don’t believe that the transgression of those norms brings real harm to a person. I think that sexual morality and moral issues regarding life have been privatized as though we were dealing with trivial things. Therefore, they invoke conscience instead of admitting the grave obligation both to form the conscience and to admonish those who do harm through errors that are present in their conscience.

Question 4: How can we interpret number six of the letter of the bishops of Buenos Aires in line with the Magisterium of Familiaris Consortio and Veritatis Splendor when it seems to speak of a creative conscience that would allow the divorced and civilly remarried to receive Holy Communion?

I think that here we have to say two things regarding this question. The first is more fundamental but doesn’t directly touch on this question.

First of all, there is a problem of conformity with the form of Christian life that the Eucharist demands and it cannot be reduced to a problem of subjective mitigating circumstances, of the possible guilt one would incur through a second co-habitation after a valid marriage. Even though I find it very difficult to imagine a case of people who can live in a second non-marital union without knowing that they are involved in an adulterous union.

Regarding a “creative” conscience to which the question refers, I believe there are possibilities for using the expression. I don’t have the text of the statement in front of me, a statement that, when I read it, I found confused and also interiorly contradictory. But the concept of creative conscience is criticized in Veritatis Splendor, when one attributes to the term “creative” the authority to establish a moral norm or to create a moral norm adapted to the situation which is not dependent on the objective norm that guides Christian action and morality, and of all Chistians.

I think that, in a certain sense, one can salvage the idea of a creative conscience if one attributes to this expression not the authority to establish exceptions to negative moral norms, but as an expression which indicates the necessary search the conscience has to undertake to find the best, most suitable way to carry out the good. In this sense, there is a “creativity” of human reason, which allows it to search and find the most suitable solutions. But this would be attributed more to prudence than to conscience. However, saying this in this setting embarrasses me because another of my great teachers, a Dominican Father who taught here at the Angelicum, said he would never have used the word “creative” attributing it to man if not by way of a faint analogy since creation is an act proper to God and not of man. However, by way of a faint analogy, one could use it to describe a prudent conscience, or better said, the virtue of prudence inasmuch as it invents it finds solutions in the sphere of good in order to respond in its actions, but never to create exceptions to a negative moral norm.