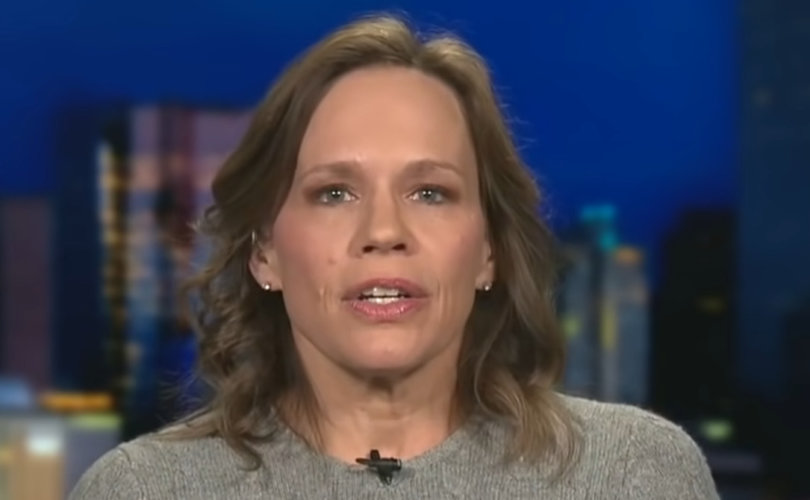 (LifeSiteNews) — A former Levi’s executive who quit after being bullied for publicly questioning the wisdom of school closures as a COVID measure slammed the company for “silencing any dissent within the organization” and being “held hostage by intolerant ideologues.”

In a stirring testimonial published February 14 on former New York Times writer Bari Weiss’ Substack, ousted Levi’s Brand president Jennifer Sey explained that after being pressured to leave the corporation due to her views, she turned down a $1 million severance package so she wouldn’t have to sign a nondisclosure statement.

Sey, a former elite gymnast who began working for Levi’s in 1999, said that during her more than 20-year career with the prominent corporation she had often engaged in political advocacy focused on helping kids, for which she had earned support from her company.

When she faced pushback for her activism, she said Levi’s “stood by me,” and even “embraced me as a hero.”

Sey would later discover, however, that Levi’s would draw the line at certain political causes.

“Early on in the pandemic, I publicly questioned whether schools had to be shut down,” the mother of four said. “This didn’t seem at all controversial to me. I felt — and still do — that the draconian policies would cause the most harm to those least at risk, and the burden would fall heaviest on disadvantaged kids in public schools, who need the safety and routine of school the most.”

Sey, an Elizabeth Warren supporter who joined the George Floyd bandwagon in 2020, backs the LGBTQ movement, and has two black children, said she was derided as a “QAnon conspiracy theorist” and a “racist” after she became politically active in trying to push government leaders to reopen schools.

From early in the pandemic, scientists and public health experts have been aware that children face extremely low risk from COVID-19. Meanwhile, studies have continually shown that school closures and moves to virtual learning have severely set children back, especially children from low-income communities.

Moreover, US News reported that a study of more than 39,000 children treated at nine pediatric trauma centers between March and September 2020 found that ”[p]hysical abuse of school-aged kids tripled during the early months of the pandemic when widespread stay-at-home orders were in effect.”

Despite the data, Sey said that in the summer of 2020 the head of Levi’s corporate communications told her to stop talking about the school closure issue, since “when you speak, you speak on behalf of the company.”

In Sey’s article, she pointed out she was not using her public platform as a Levi’s executive to pursue her advocacy. She also noted that Levi’s has repeatedly made political statements regarding LGBTQ issues, gun control, and “voting rights,” and that employees who publicly commented about ousting former President Donald Trump in 2020 and weighed in on the Ahmaud Arbery and George Floyd controversies were not censored for doing so.

The former Levi’s executive said when she refused to back down or stifle her personal views about COVID school closures, she began receiving calls from the legal department, human resources, a board member, and even the company’s CEO.

“I explained why I felt so strongly about the issue, citing data on the safety of schools and the harms caused by virtual learning,” she said. “While they didn’t try to muzzle me outright, I was told repeatedly to ‘think about what I was saying.’”

Sey eventually moved her family from San Francisco to Denver so her children could attend in-person schooling. She continued in her activism regardless of attacks in the public square and among Levi’s employees.

According to Sey, being asked to go on the Laura Ingraham show on Fox News to discuss her school reopening advocacy was “the last straw.”

Sey said employees began harassing her during company-wide meetings for being “anti-science,” “anti-fat” (she had retweeted a study that noted obese people are at higher risk for serious disease), and “anti-trans,” since she had criticized the push to re-brand Mother’s Day as “Birthing People’s Day.”

Employees also accused her of “being racist, because San Francisco’s public school system was filled with black and brown kids, and, apparently, I didn’t care if they died,” while co-workers even criticized her for her husband’s perspectives on COVID that he shared on social media.

According to Sey, her former employer’s head of the human resources department ultimately told her that although she was factually correct about the school closure issue, “it was classist and racist that public schools stayed shut while private schools were open, and that I was probably right about everything else, I still shouldn’t say so.”

“[D]uring a dinner with the CEO, I was told that I was on track to become the next CEO of Levi’s,” she said. “The only thing standing in my way, he said, was me. All I had to do was stop talking about the school thing.”

Finally, facing repeated attacks while refusing to stop speaking out about an issue she firmly believed in, Sey received an ultimatum.

“In the last month, the CEO told me that it was ‘untenable’ for me to stay,’” she wrote. “I was offered a $1 million severance package, but I knew I’d have to sign a nondisclosure agreement about why I’d been pushed out.”

Sey refused, forgoing the generous severance package for the ability to share her story.

Though she said she “never set out to be a contrarian” and doesn’t “like to fight,” Sey said she felt obligated to retain the ability to speak out against a corporation that she feels is “trapped trying to please the mob — and silencing any dissent within the organization.”

“In this it is like so many other American companies: held hostage by intolerant ideologues who do not believe in genuine inclusion or diversity,” she said.