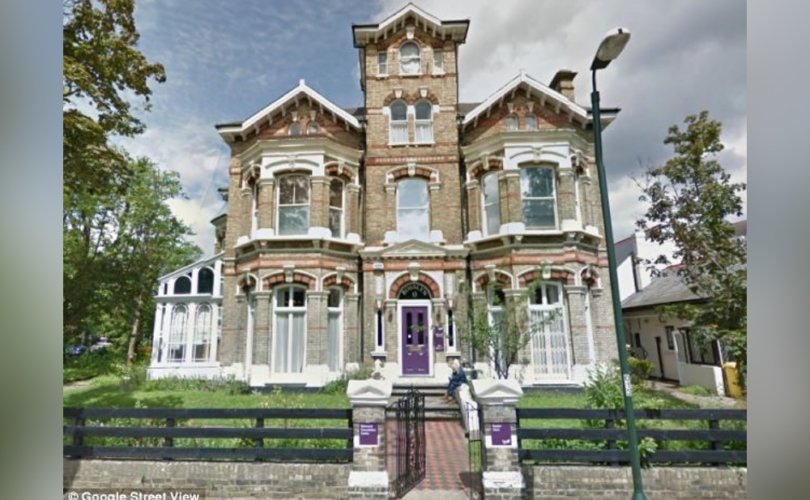 TWICKENHAM, England, June 12, 2018 (LifeSiteNews) — There is a large house on the southwestern outskirts of London. It is an impressive building set back from the road and towering over those who stand in front of it or those who enter.

Today, it is an abortion center run by the British Pregnancy Advisory Service.

This house, in a residential quarter of suburban London, is yet another monument to Britain’s culture of death.

It was not always so.

At one time, this building was a convent run by a Catholic order of nuns, the Daughters of the Immaculate.

In the 1960s, students from nearby St. Mary’s College at Strawberry Hill would come to this building to lodge there under the care of the nuns while they studied to be teachers. Within this Catholic hostel, there was, of course, a chapel where Holy Mass and Eucharistic Adoration took place.

Today, a different sacrifice takes place, however, one to a very different god.

How did this come about?

Some claim the sisters were unaware of the intended use of the former convent building when they came to sell it to buyers back in the late 1960s. In any event, by 1970, a forty-bed establishment had opened: The Richmond Private Clinic and Nursing Home.

Abortion in certain circumstances was permitted by legislation the British Parliament passed in 1967. By the following year, the 1967 Abortion Act had come into existence. In due course, this new private clinic at Twickenham obtained the necessary license to perform abortions, despite protest from the area’s Member of Parliament, Toby Jessel, and local church groups.

In April 1971, the Richmond Clinic placed an advertisement in The Times newspaper recruiting more office staff. In particular, the owner sought “a young lady” between 25-35 years old fluent in English, French, and German. The same paper also carried another advertisement from the center seeking nursing staff fluent in French. With the Richmond Clinic’s proximity to Heathrow airport, then London’s only major air terminal, the potential “market” for foreigners traveling to England to take advantage of its liberal abortion laws was not lost on those running the center.

In June 1971, one such woman was Odette Boutte. She came from France to England with her husband, intending to have an abortion at the Richmond Clinic. The 42 year-old Frenchwoman had four children between 7 and 23 years old, and she was almost five months’ pregnant. Her decision to come to Britain for an abortion — for which her husband paid £450 — was to cost her life.

Madame Boutte died at Richmond Clinic from a hemorrhage. An inquest into her death soon followed. The coroner’s verdict was one of misadventure. The verdict came with a recommendation for the abortion center, namely, that future operations were to be performed only during daytime, as emergencies were harder to deal with outside working hours. Despite the fatality, the center’s license to perform abortions was retained.

By the next year, however, the Richmond Clinic had closed. In June 1972, the center was ordered to produce certain records for a government inspection. These were not forthcoming, and so the place was closed.

The building on Rosslyn Road was to stand idle for seven years until occupied once more by a different provider of the same trade.

In March 1979, the Pregnancy Advisory Service (PAS) bought the premises, complete with the coveted license to operate the same business as had taken place there before. PAS made an application to the local health authority to reclassify the building as a maternity home under the name “Rosslyn.” Despite opposition from the local MP, Toby Jessel, along with certain members of the health authority, a cottage in the grounds of the former convent was refurbished and business once again seemingly flourished with lots of “visitors” coming from abroad.

In 1996, the premises changed owners once more.  PAS was absorbed into the British Pregnancy Advisory Services, which is now the current owner of the building.

To this day, their trade continues. According to a recent government inspection report, “between 1 July 2014 and 30 June 2015, 5,492 surgical terminations and 1,973 medical terminations” were carried out at the Twickenham center, with 323 abortions being performed when the foetus was 21 weeks or over.

Today, there is, however, a daily peaceful vigil of prayer and witness by Good Counsel Network outside the Twickenham center.

The vigil started there in November 2013 after a 40 Days for Life campaign. Each week, the Good Counsel Network (GCN) maintains its presence at the abortion center. The GCN is a UK pro-life charity that works under the patronage of Our Lady of Good Counsel to be there for the women who are thinking of having an abortion to offer them alternatives: practical help, such as accommodation options, financial support and legal advice. They also offer each woman the moral support she needs so that she can, if she chooses, continue with her pregnancy.

Through the years, there have been two 40 Days for Life campaigns at the Twickenham center. At these vigils, like with the Good Counsel Network, volunteers pray for the unborn babies, their mothers and fathers, and everyone else who is involved in the abortion decision, including abortion center staff. Since 2013, during the course of these vigils, 20 women chose life for their babies.

In the past, when the building was run for a different purpose by the nuns, there was Holy Mass each day in the convent’s chapel. Then the priest would hold aloft the consecrated Host and say the words: This is my Body.

Those words still resonate inside that building today, even yet, for what is taking place still concerns His Body.