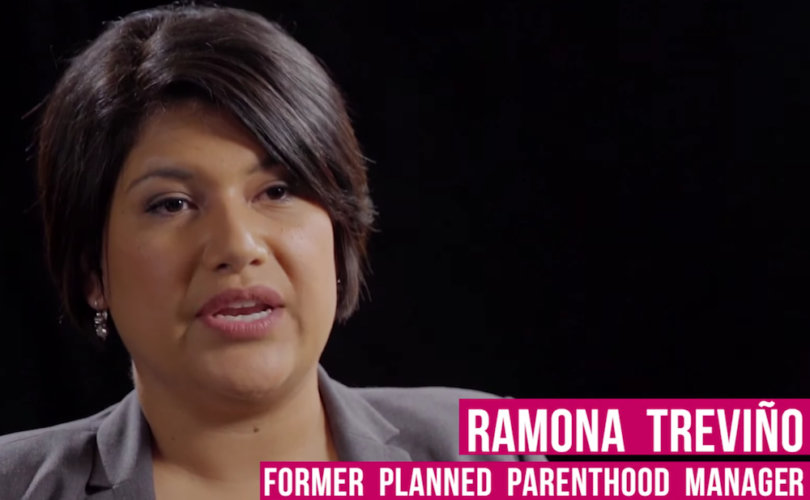 February 14, 2017 (LifeSiteNews) – The two latest videos in Live Action's investigation of Planned Parenthood feature testimony from former managers that the organization “treated women like cattle” and prioritized abortion above other services.

“It was a struggle because I felt like Planned Parenthood treated women like cattle,” Ramona Treviño, a former Sherman, Texas, Planned Parenthood manager, explained in one video. “We talked about reducing the amount of time that we saw our … new patients.”

“When you're dealing with an initial patient, and that time is reduced … it just seems unethical to not spend that time with your patient and provide the proper care and explanation for something as serious as birth control,” which has a low rate of effectiveness and then “the next option for her is abortion,” said Treviño.

“Over the years I worked there … up went abortion goals and all the other goals we were required to meet,” Sue Thayer, a former Storm Lake, Iowa, Planned Parenthood manager, told Live Action's Lila Rose in the video. “The nurse practitioner that had been there four days a week was now there two hours a week, but we were still seeing the same amount of clients. It felt wrong.”

“Women were just herded through,” she said.

“There was no prenatal care; there was nothing we could offer women who were pregnant” other than abortion, according to Treviño.

Live Action has been releasing its “Abortion Corporation” investigation as Congress prepares to redirect half a billion taxpayer dollars from Planned Parenthood to community health centers that don't commit abortions. Other videos in the investigation show Planned Parenthood uses its ultrasound technology for abortions, but not for women who want to continue their pregnancies and check the health of their babies.

“There is no more room for deception,” said Rose. “The record becomes clearer each week that we release a new report: Planned Parenthood’s focus is not women’s healthcare, but abortion. Planned Parenthood’s business model turns away women seeking options besides abortion and prioritizes the destruction of preborn lives for the sake of profit. Not only have Live Action’s investigative videos proven it, but Planned Parenthood’s own former employees have said so.”

“When lawmakers watch these videos, they should be deeply concerned at the treatment of women at Planned Parenthood,” Rose continued. “It’s time to redirect Planned Parenthood’s taxpayer funding to more worthy local health clinics that aren’t in the abortion business but that instead provide holistic healthcare to women.”