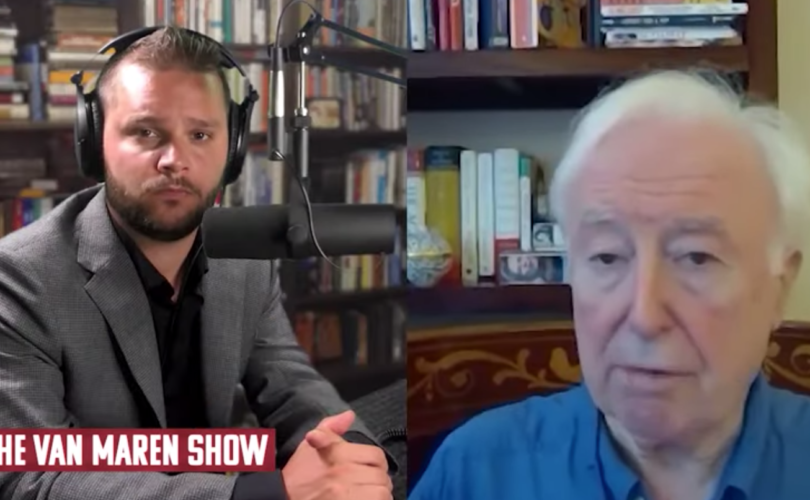 August 19, 2020 (LifeSiteNews) — Legendary conservative writer John O’Sullivan joined Jonathon van Maren today to discuss his relationship with Margaret Thatcher, the onetime prime minister of Great Britain for whom he was a speechwriter and adviser. He also talked about the future of the conservative movement and how newspapers and universities in the United States are overhwelmingly in favor of the Democratic Party.

O’Sullivan is a British writer whose essays have been featured in a variety of publications, including National Review, where he served as an editor in the ’80s and ’90s. He still writes for that publication on occasion. O’Sullivan is also the author of The President, the Pope, and the Prime Minister, which covers the efforts taken by Pope John Paul II, Ronald Reagan, and Lady Thatcher against communism.

During his appearance on The Van Maren Show, O’Sullivan shared stories about his involvement in politics in the U.K. in the 1970s and his relationship with Margaret Thatcher. He also opines on Black Lives Matter, Brexit, and Viktor Orbán, the current prime minister of Hungary.

O’Sullivan describes himself as a “free speech absolutist,” so he finds certain policies pursued by Orbán as contrary to his own preferences but believes “so far they seem to be working well.” He and Van Maren also delve into the inner workings of the modern conservative movement and how it’s been dealing with the rise of populist and nationalist political candidates in recent years.

O’Sullivan believes there’s been two types of international arrangements since the close of World War II. Historically, relations between countries were largely conducted between the nation-states themselves. Intermediate bodies like the U.N. and the European Union were rather weak. Now, O’Sullivan argues, these bureaucracies have much more power, and they wield it in such a way that often forces countries to relinquish a certain degree of autonomy.