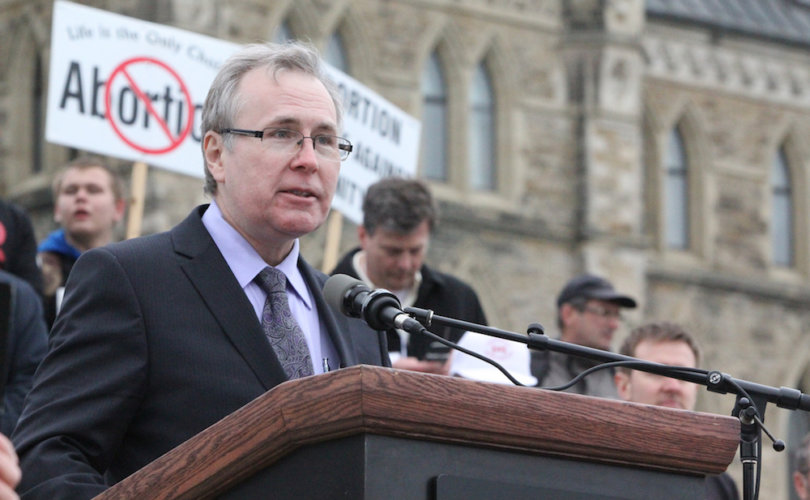 ‘[The law societies] are saying you can’t practice law because of your religion. That’s outrageous,’ says Woodworth.Robert Du Broy

VANCOUVER, British Columbia, May 30, 2016 (LifeSiteNews) – Former Conservative MP and stalwart pro-life advocate Stephen Woodworth is changing hats and leading a demonstration on behalf of Trinity Western University at the Vancouver law courts on May 31. There, on the following day, the Evangelical institution will defend its right to establish a law faculty against the wishes of the B.C legal profession.

Woodworth practiced law for 30 years before sitting in the House of Commons from 2008 to 2015 for Kitchener Centre. There in 2012 he made a controversial motion, M-312, to form a committee to examine the scientific evidence of when an unborn child became a human being. The motion did not go forward.

Woodworth told LifeSiteNews he was demonstrating “to raise awareness of the snowballing of abuse of power in the past five years in Canada and the elimination of freedom.” His demonstration will take place at 11:00 am at 800 Smithe Street in Vancouver.

Woodworth said the decision by the law professions in British Columbia, Ontario, and Nova Scotia to reject graduates of the proposed law school in advance of its existence, based solely on its Christian moral code, was “an outrageous abuse of their power.”

“Most Canadians and most lawyers have not examined the issues sufficiently,” he said.

The three law societies that have rejected TWU grads in advance have done so because TWU, like many Christian universities in Canada and the U.S., requires students and faculty to agree to follow a Christian code of conduct that includes refraining from sexual relations outside man-woman marriage.

“These authorities [the law societies] are saying you can’t practice law because of your religion. That’s outrageous,” said Woodworth.

Canada’s other law societies aside from Quebec’s (which has a different civil law tradition) will all accept TWU law grads, but the British Columbia government has withdrawn its approval of the school pending the outcome of the legal disputes.

TWU has won court rulings against the B.C. and Nova Scotia law societies and lost against Ontario’s. The Nova Scotia legal profession’s appeal was heard earlier this year. The B.C. Law Society’s appeal will be heard starting June 1. All are expected to be appealed again to the Supreme Court of Canada and potentially amalgamated at that level.

TWU’s school would be the only Christian law school in Canada. Yet the legal argument has been made that its existence would reduce the access of homosexuals to the legal profession. TWU maintains that it does not ask its students what their sexual orientation is.

Trinity Western, which is situated in Langley, just outside of Vancouver, won a similar dispute at every legal level up to and including the Supreme Court of Canada, in 2001. British Columbia’s teaching profession opposed TWU creating a teacher’s college because of the same requirement that its graduates submit to the Christian moral code in its community covenant.

Trinity Western is affiliated with the much smaller, newer Catholic college Redeemer Pacific, whose students take many classes at TWU. The Catholic Archbishop of Vancouver Michael Miller is a staunch supporter of TWU and an intervener in the B.C. appeal along with the Catholic Civil Rights League, the Canadian Council of Christian Charities, Christian Legal Fellowship, Justice Centre for Constitutional Freedoms, Association for Reformed Political Action (ARPA) Canada, Evangelical Fellowship of Canada, Christian Higher Education Canada, Faith and Freedom Alliance, and Seventh-Day Adventist Church in Canada.

TWU’s appeal against the Ontario court ruling will be heard in Toronto from June 6-8.