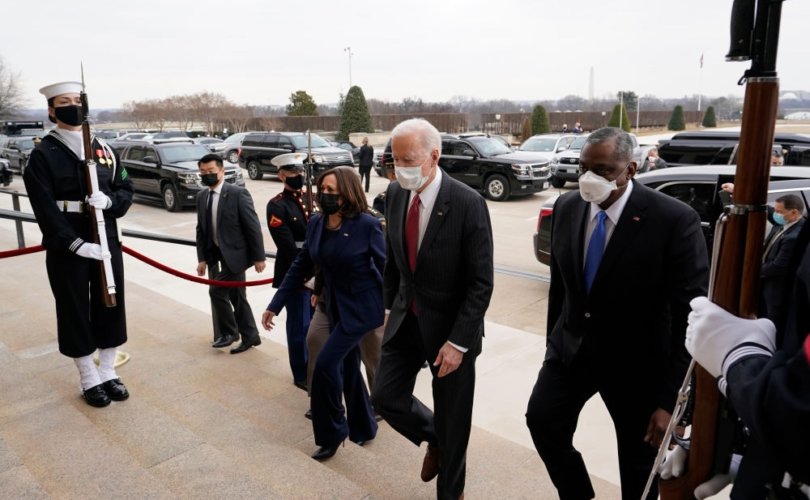 February 10, 2021 (LifeSiteNews) –Former U.S. Navy Lieutenant Commander Steven Rogers has slammed the Biden administration’s new purge of “extremism” in the U.S. military, calling it a pathway to communism in America.

“This to me is dangerous and looks like a political litmus test, and it’s a road that you would only find in Communist China or in the former Soviet Union,” Lt. Comm. Rogers told NTD on Saturday.

Biden’s newly-confirmed Defense Secretary, Lloyd Austin, had ordered a 60-day “stand-down” across the military to “discuss the problem of extremism in the ranks,” as the Pentagon announced last Wednesday.

In his order, Austin directed all military leaders to admonish troops against “impermissible behaviors” and to discuss “procedures for reporting suspected, or actual, extremist behaviors.”

He called the move “the first initiative of what I believe must be a concerted effort… to eliminate the corrosive effects that extremist ideology and conduct have on the workforce.”

“[The military] will become another arm of the government. I’m not talking about the U.S. government as we know it now, but a U.S. government Joe Biden, the socialists, the communists want to create in this country,” Lt. Comm. Rogers warned.

“Are military members who have conservative views and values — are they the ones that are going to be targeted?” he asked.

According to Breitbart News, an Army commander recently told Special Forces trainees that they could be “detained” or removed from the military if caught with right-wing symbols, including those associated with QAnon.

“[I]f anyone gets caught wearing, buying, selling, affiliated with in any way, any of those things on that list, that the first thing [the commander is] going to do is chapter us out of the Army,” a source told Breitbart.

At least one Army chaplain is currently under investigation as an “extremist” after affirming biological sex and condemning transgender ideology in a Facebook post.

“We all know that in Communist China and the former Soviet Union there were political offices attached to every unit, you just read something that is anti-government or criticized the Kremlin or criticized the Chinese Communist Party, you’re finished, you’re done,” Lt. Comm. Rogers said.

The anti-right crackdown on service members also follows a mass purge of hundreds of Trump appointees from dozens of military advisory boards, as well as the FBI vetting of the political beliefs of the 26,000 National Guardsmen deployed to D.C. for last month’s inauguration.

Only two soldiers ultimately were removed from the event for alleged, undisclosed ties to “extremism.”

“No matter what” the number of “extremists” may be, “it is … not an insignificant problem and has to be addressed,” Pentagon press secretary John Kirby said on Wednesday, pointing to the service members who may have taken part in the Capitol riot on January 6.

Of the 143 FBI criminal investigations involving military service members in 2020, only one-fourth pertained to white nationalism, implicating a small fraction of one percent of the over 1.3 million Americans in the U.S. military.

Nevertheless, the Democratic Chair of the House Military Personnel Subcommittee has stated that the Defense Department’s efforts may not be going far enough.

Regardless of the Capitol riot, she said, “I believe strongly that the actions recommended in this letter have been justified for quite some time.”