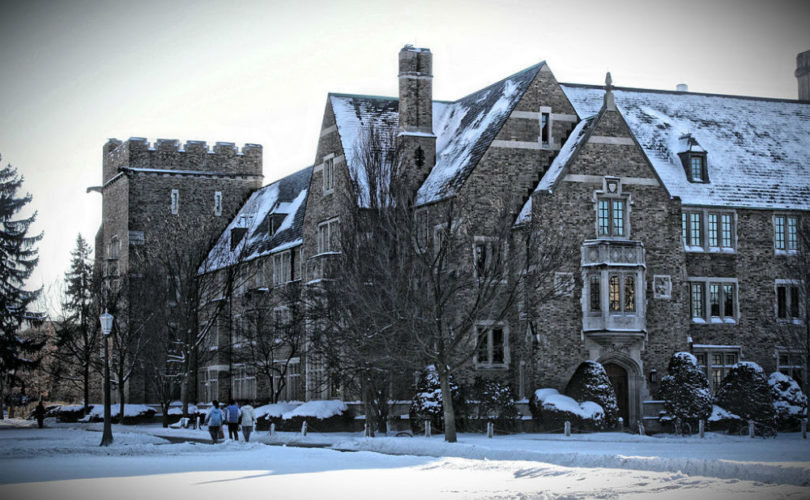 July 8, 2016 (Cardinal Newman Society) — Father Ronald Vierling served as rector of the University of Notre Dame’s Morrissey Manor, an all-male dormitory serving 240 students, for 11 years. He just stepped down from his position, and this summer he’s transferring to a Catholic boarding school in New England where he’ll serve as chaplain.

The Cardinal Newman Society recently spoke with Fr. Vierling about his time at Notre Dame and the importance of strong residential life policies for Catholic universities.

Concerning residential life, Fr. Vierling lamented shifts in the University’s housing policies, saying Notre Dame is “more concerned with treating students like a consumer base rather than young people in need of formation.”

Fr. Vierling told the Newman Society that all student housing policies “must point in the same direction: fostering the human and moral development of students by setting meaningful standards which are informed by the teaching of the Church and holding students accountable to those standards.”

Newman Society: What role should a good Catholic university residence life program play in the moral and spiritual formation of students?

Fr. Vierling: A good starting place is to recall that all Church ministry is directed to one formal end: the salvation of souls. Catholic education contributes to this end by striving to form a morally intelligent person. Residence life policies further the Catholic mission [of colleges and universities] by not only setting a standard of student conduct but also serving as an educative tool to instruct students in the very values the policies are aiming to foster.

Newman Society: What, in your opinion, are the major obstacles today to college students progressing in moral and spiritual formation?

Fr. Vierling: The problems confronting Catholic institutions of higher learning are a microcosm of the challenges facing the Church. The issue is not a deficiency of catechesis, but rather there exists an even more basic problem today: a lack of evangelization. Non-believers cannot be catechized which is why many of our religious education programs are such a failure.

My experience at Notre Dame was that a growing percentage of students are Catholic only in a nominal sense. A relativistic culture where “I feel” has replaced “I believe” and where “if it feels good, do it” is the moral norm are conditions very unfavorable to student formation. However, our faith bids us to remember that the Church has two things on her side: facts (doctrine) and results (Saints). She also possesses the means of sanctification in the sacraments.

When the Church’s educational institutions teach with an assured voice and are confident in their purpose as instruments of the teaching mission of the Church, as well as providing a robust liturgical life, students are transformed. Where this conviction and a rich liturgical life is lacking, students will graduate as they entered: completely untouched by the Catholic intellectual and moral tradition. The possibility for conversion is thereby squandered with implications for both time and eternity.

Newman Society: Overall, what is your opinion of the state of the University of Notre Dame’s dedication to its Catholic identity?

Fr. Vierling: I would say it is a mixed bag. On one hand, Notre Dame serves the mission of the Church in many positive and effective ways. The Alliance for Catholic Education, the Center for Ethics and Culture, and the Institute on Church Life spring immediately to mind. There also remains a core group of professors who are very faith-filled and bring that faith to bear in what and how they teach.

On the other hand, Notre Dame betrays something of an inferiority complex by preoccupation with benchmarking itself against secular, peer institutions. This often results in a diminishment or outright compromise of Catholic identity and mission which are deemed obstacles to achieving academic prestige. It is also helpful to recall that Notre Dame was one of the organizers of the infamous “Land ‘O Lakes” conference in 1967 at which Catholic universities declared their independence from Church governance. In a nutshell, the universities self-define their Catholicism and then measure their Catholicity against their own self-definition. By these standards, schools are always “Catholic” no matter the degree of separation from Church teaching and practice.

Ironically, while posturing openness to the world and secular accrediting agencies, they close themselves off to the Church. The pastoral problem is obvious as the culture of these schools is based upon a selective and self-serving adherence to those components of Catholicism which fit their narrative; in turn, this engenders the same “Catholic on my own terms” attitude in students. “I’m a Catholic, but …” and “I know the Church teaches such-and-such, but I believe …” punctuates many a conversation. Sadly, it is possible to attend a school like Notre Dame and remain untouched by the Catholic faith and intellectual tradition. One must be deliberate in the selection of both professor and course.

On a positive note, I see a great deal of hope for Notre Dame in the abiding commitment of the Congregation of Holy Cross. There are many fine, young priests coming up the ranks. I believe there is a great need to reclaim the vital arteries of university life, and hopefully these men will be positioned to do it over time. The drift in Student Affairs, for example, is very palpable for those of us who don’t define residential life solely in brick and mortar terms. To the mind of many the crown jewel of the Notre Dame experience is the residential life system, and the fear is that it is being sacrificed to priorities which have the net effect of displacing student formation.

Newman Society: What are some ways that residence life at Notre Dame helps students achieve moral and spiritual growth?

Fr. Vierling: All of the residence halls at Notre Dame have a chapel with Holy Mass and the sacraments easily accessible. Many of the halls also have an in-residence priest and several others are headed by dedicated Holy Cross priests, so pastoral outreach is a constant. Campus Ministry offers great supplemental support to the halls and outreach to the campus by sponsoring various kinds of retreats, offering sacramental preparation and catechetical initiatives. Finally, there is a constellation of student groups ranging from the Militia Immaculata to Right to Life. All of these play a vital role toward fostering both the moral and spiritual growth of students who wish to avail themselves of these resources.

Newman Society: What are some ways that Notre Dame’s residence life hinders students in their moral and spiritual growth?

Fr. Vierling: When I arrived at Notre Dame in 2005, the focus within residential life was building Christian community and fostering the holistic development of students. Sadly, it seems the division of Student Affairs today is more concerned with treating students like a consumer base rather than young people in need of formation.

This mentality is most evident in their new approach to discipline, which was something rolled out as revolutionary but is actually a rehash of what already exists in many secular institutions. To the degree that there is a process of student accountability, it is decidedly non-directive/non-judgmental. Any action short of touching Title IX is now addressed through conversation and education. In this sense it manifests a secular form of humanism: the human person will respond to the good and reject evil if the difference between the two is merely explained.

Education alone is power. Living a virtuous life, which makes us pliable in the hands of God and increases our capacity to receive grace, is not an expectation. There is no acknowledgment of the reality of original sin and the inclination of the human will toward malice. This understanding of the human person hardly contributes to fostering the moral and spiritual development of students according to the Catholic understanding of those terms. It fact, it is both naive and has proven harmful.

Newman Society: To what degree do you think that relaxed opposite-sex visitation hours have a detrimental effect on students?

Fr. Vierling: As one who administered a male hall for 11 years, I can testify that the issue of inter-visitation is loaded with complexities. My perspective is that a parietal policy represents only one component of what must be a comprehensive approach to fostering healthy male-female relationships. All policies regulating residence life must service the Catholic vision of human sexuality. Anything less is doomed to fail.

Students live a compartmentalized life. They think nothing of abusing their bodies on weekends and then approaching Holy Communion on Sunday. The cause, in part, may be due to a lack of coherence in residential life policies and the failure to connect the dots between faith and the demand to live a virtuous life 24/7.

An additional challenge today is the acceptance of same-sex relationships on many of our campuses. Students say that an opposite-sex visitation policy actually fosters a double-standard. I agree, which is why I return to my point that all residential life policies must reflect the totality of Catholic moral teaching and the universal call to holiness. All are invited to feast at the table of grace on the Lord’s terms. This must be underscored for all campus constituencies.

To my mind, I do not believe that relaxed opposite-sex visitation hours are as problematic as the abuse of alcohol and the allure of the sexual hook-up culture. In point of fact, my experience as a rector was that every accusation of sexual assault was linked to the abuse of alcohol by one or both of the parties.

Again, all policies governing residence life must point in the same direction: fostering the human and moral development of students by setting meaningful standards which are informed by the teaching of the Church and holding students accountable to those standards.

Newman Society: If you could recommend three primary ways for Notre Dame and other Catholic universities to improve their residence life programs and policies, what would those be?

Fr. Vierling: I would respond by asking three questions: Are those administrators charged with purview over residential life sufficiently grounded in an authentic philosophy of Catholic education and possess the understanding as to how the setting of division goals and policies can either foster or retard Catholic mission? Do residential life programs and policies foster the human and spiritual development of students in truly Catholic terms? Does the Catholic vision permeate all dimensions of campus life reinforcing one another?