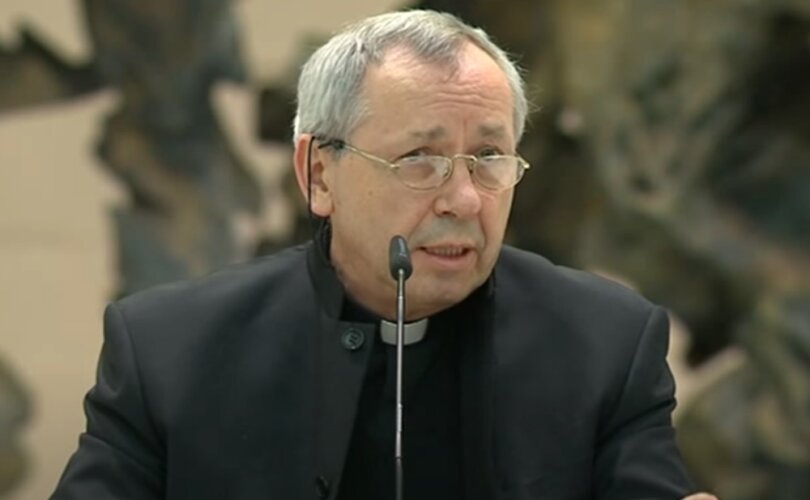 Recently, the Italian news outlets Silere non Possum, Messa in Latino and Left.it, broke news pertaining to scandals surrounding Rupnik. As LifeSiteNews has reported (HERE and HERE), he was accused of psychologically and sexually abusing religious sisters of his Loyola Community in allegations that dated back 30 years. The religious community of nuns was co-founded by a nun to whom Rupnik was both a friend and a “spiritual father.”

Details also emerged that Rupnik had been found guilty by an ecclesiastical trial after he absolved an accomplice in Confession with whom he had committed a sin against the Sixth Commandment.

As the Vatican and the Jesuit Order are both beset with numerous questions about a potential longstanding cover-up, many Catholics have yet to understand who Rupnik is. Over the past few days, testimony from a former member of Rupnik’s Loyola Community has presented an account of Rupnik, presenting an image which is less known to the wider Church, which sheds disturbing light of the alleged abuse which Rupnik perpetrated.

Who is the public Fr. Rupnik?

Rupnik was born in November 1954 in Slovenia. After entering the Society of Jesus in 1973 and completing his theology studies in the Jesuit-run Gregorian university in Rome, he was ordained in 1985.

In the early 1980s he co-founded the Loyola Community with Sister Ivanka Hosta.

From the fall of 1991 he worked at Rome’s artistic Centro Aletti, rising to become its director just a few years later.

However, Rupnik has risen to prominence, at least in Rome and amongst clerics, due to his artwork and mosaics, which are often marked by his unique style of the subjects’ eyes.

He gained increased notoriety in recent years due to a number of prominent works, such as the logo for the Jubilee Year of Mercy in 2015 – the famous two figures with a shared, central eye.

In the explanation for the image, Rupnik wrote that the shared eye symbolized that Christ saw through Adam’s eye, and vice-versa: “Christ sees with the eyes of Adam, and Adam with the eyes of Christ.”

Rupnik also painted the official image of the 2022 World Meeting of Families, another image marked by the characteristic of a shared, conjoined eye. “What I felt was important was to show the novelty of the family according to the Church, according to baptism, according to life in Christ, according to the new man,” said Rupnik about the image.

Upon the request of Pope John Paul II, Rupnik also led the multi-year renovations of the Vatican’s Redemptoris Mater Chapel.

Indeed, a non-exhaustive list of Rupnik’s artwork reveals just how extensive has been his reach across the Catholic Church, and how welcomed he has been. His artwork has been commissioned for, and is now displayed in, numerous locations across the world, including:

In addition to receiving such continued favor from numerous clerics and even popes, Rupnik has received a number of awards for his artwork.

Now that we know what we’re looking at, it’s going to be everywhere. #Rupnik

He’s completely ubiquitous in the world of Vatican-based publishing. https://t.co/xdk87ushK4

Critics, however, expressed disapproval of Rupnik’s art many years prior to the recent reports of sexual abuse being made public, and especially after he was pushed into the wider Catholic world with his 2015 Jubilee Year of Mercy logo.

The hidden Fr. Rupnik and his sexual ‘theology’ desires

Such mistrust of Rupnik’s artwork is now being supported in light of the explosion of sex abuse allegations made against him, along with news of his prior excommunication. While critics have highlighted the peculiarities of his artwork for many years, now one of his alleged victims of sexual abuse has stated that his art is deeply connected to his sexual perversions.

The statement was made to Italian investigative news outlet Domani by a former member of the Loyola Community, with the pseudonym “Anna.”

When modelling for Rupnik early in their acquaintance – modelling which involved undoing her blouse – Anna stated that Rupnik kissed her on the mouth on one occasion, stating that this was how he “kissed the altar where he celebrated the Eucharist.”

Describing the increasing levels of sexual intimacy which Rupnik demanded of her, Anna stated that if she rejected him, or did not comply with his wishes, “he would immediately say that my spiritual path was getting stranded and present me as ‘wrong’ to the other boys and girls in the group that was forming around him in the meantime.”

Anna also stated that Rupnik’s art was firmly linked to his sexual desires:

It was a real abuse of conscience. His sexual obsession was not extemporaneous but deeply connected to his conception of art and his theological thinking. Father Marko at first slowly and gently infiltrated my psychological and spiritual world by appealing to my uncertainties and frailties while using my relationship with God to push me to have sexual experiences with him.

“He had no restraints; he used every means to achieve his goal, even confidences heard in confession,” she stated.

Satanic. There is no other word for this vile, horrifying abuse.
Why on earth has Fr Rupnik not been laicised? Why is the DDF obdurate in its refusal to derogate from the statute of limitations in this case?
(Italian source: https://t.co/IyMAAXm8Dj) pic.twitter.com/Xuy4beOUMB

The former member of Rupnik’s community stated that he even encouraged her to have “threesomes with another sister from the Community, because sexuality had to be, according to him, free from possession, in the image of the Trinity where, he said, ‘the third gathered the relationship between the two.’”

Over time, Anna stated that Rupnik’s relation with her was marked by a “move from theological justifications for sex to an exclusively pornographic relationship.”

She estimated that of the 41 women in the Loyola Community in the early 1990s, Rupnik had engaged in sexual abuse with about 20 of them.

Anna stated that she came close to committing suicide due to the abuse she suffered for nine years at the hands of Rupnik. She added that both Church officials and the Jesuit Order themselves had been informed about Rupnik by Anna from as early as 1994.

The Vatican has yet to issue a statement on the Rupnik case, nor has it addressed allegations that Pope Francis intervened within “hours” to lift the excommunication Rupnik incurred.