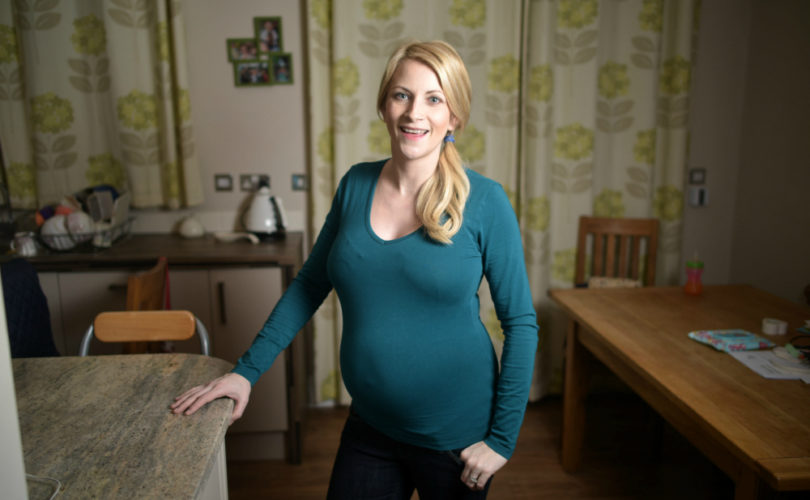 A former British Olympian says she intends to continue her pregnancy with triplets, despite doctors advising her to “selectively reduce,” that is, abort, two of her children for the benefit of the third.

Gymnast Jaime Halsey and her rugby player husband Steve, both 35, were told they were expecting triplets last October. Two of the three babies are identical twins and all are believed to be girls.

Because Jaime's 12 week ultrasound scan revealed that one of identical twins was 25 per cent smaller than the other, she was referred to specialists who said the odds of all three surviving was 50/50, and suggested she abort two of her unborn children.

Jaime, who was Team Great Britain's first female trampolinist at the 2000 Sydney Olympic Games and led her team in the Beijing Games in 2008, said she would not sacrifice the lives of two of her children to save just one.

“We had our first scan in Northampton at 12 weeks and were immediately referred to specialists at John Radcliffe Hospital in Oxford,” Jaime told her local newspaper, the Northampton Chronicle.

“They told us one of the twins is 25 per cent smaller than the other and there’s a massive risk of further growth restrictions. I also risk putting my body under three times the strain to keep them healthy, so they advised the termination,” she said.

“But other people have triplets and I wasn’t prepared to abort two healthy babies just to make life easier,” she stated.

Jaime and Steve, who already have a two-year-old daughter, Flo, are determined to bring all three babies safely into the world.

Jaime is now 26 weeks into her pregnancy and has been told she will have to deliver the babies by caesarian after which they will have to stay in incubators and monitored for any problems before they can be taken home.

“If this was my first pregnancy I would be terrified, but seeing how ace Flo is makes me confident we can do this,” said Jamie. “I am determined to make this happen. I could not live with myself if I sacrificed two of them – to save one.”

“I am as big now as I was at full-term with Flo. But the hardest thing is avoiding making plans for when they are born. We have checks almost weekly as things keep changing.”

Steve recalled that, “reaching 24 weeks was a big milestone for Jaime.”

He said that the caesarian could be scheduled when the babies have reached 30 weeks in order to give them the best chance while not putting Jamie at more risk.

“If they stay in there until 30 weeks then it gives them a much better chance of being born with fewer problems,” he said.

“Everything went well at the last scan and all three babies are growing well. The one twin remains smaller but all three are extremely active which is good news.”

“We also had the chances to see the faces of our three little girls on a 3D scan which was really exciting,” Steve said. “We never thought about terminating two of the babies for a second, we want to bring all three of them into our happy family.”

Steve and Jamie live in Abington, Northampton, where Steve is a physical education teacher and coaches youth rugby teams. Jaime coaches trampolining and has started a cake-making business from home.