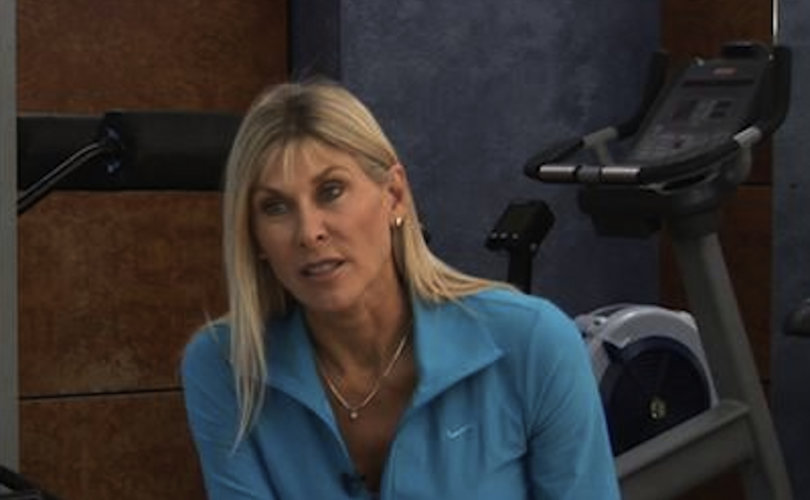 Davies, who won a silver for England at the 1980 Moscow Olympic Games, told The Daily Telegraph that so-called “transgender” male athletes have a natural and physical advantage over girls and women in competitions. “Michael Phelps has size 15 feet; your average female swimmer has size six,” she said. “If someone is a good swimmer and they decide they want to transition to being a female, none of our girls would stand a chance.”

“It’s not anything to do with saying sport isn’t for everybody, it’s asking how we classify it,” she said. “And rather than classifying it by gender, we have to classify it by sex. And if the transgender society aren’t happy with that, we’ll have to talk to governing bodies about an alternative, a transgender games or something. But how can this be fair to women?”

“My argument is simple,” she told The Daily Telegraph, “that there is a benefit to being born a male, and that’s not fair on females in sport. That’s really it.”

Last week, Davies was criticized for airing her views on Twitter. She wrote, “to protect women’s sport those with a male sex advantage should not be able to compete in women’s sport.” When she was accused of harboring “transphobia” or hatred of people experiencing gender dysphoria, she responded, “I am not a bigot and I am not a transphobic.” She told the newspaper: “It sometimes feels like the world has gone mad, and we’ve lost our common sense.”

Despite having never knowingly spoken to a so-called “transgender” athlete, Davies said she would “love” to speak to people and create a forum to discuss transgenderism.

Controversy has swirled over the issue of so-called “transgender” athletes. For example, men claiming to be women have defeated real women in various sports, including track events. Grand Slam tennis champion Martina Navratilova was chastised by transgenderism advocates when she said men pretending to be women were “cheating” by participating in female sporting competitions. She said, “Having a penis and competing as a woman is not fair.”

The avowed lesbian athlete later apologized, saying she had been referring to people who had “cynically” altered their claimed gender in order to “gain a competitive advantage.” For her frankness about biological sex differences, Navratilova was dropped from the board of a major LGBTQ organization.

In South Dakota, a Republican lawmaker has proposed legislation that would require any athlete to compete in events according to the sex listed on his or her birth certificate. “Texas’ University Interscholastic League requires that students participate on sports teams that correspond with the sex listed on their birth certificate,” said Senator Jim Bolin. “I just firmly believe that those who are males should play in sports designated for males and those who are females … should play in sports designated for females, according to your birth certificate. It’s about fair competition.”