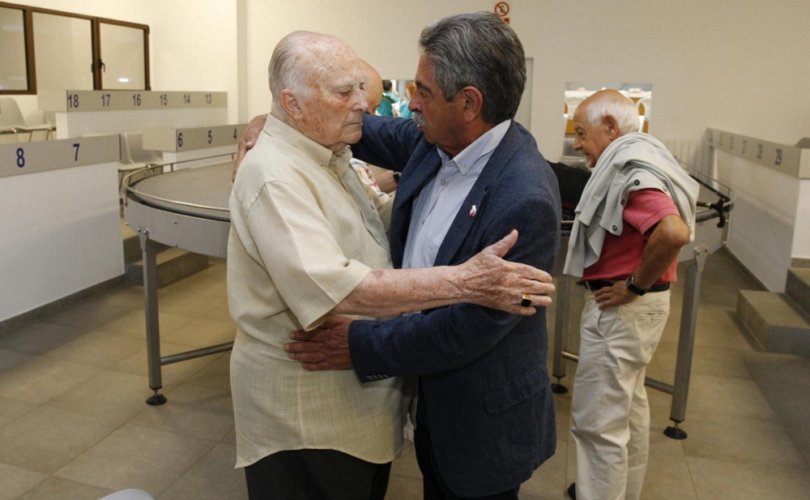 COLINDRES, Cantabria, Spain, August 27, 2019 (LifeSiteNews) ― An archbishop and former papal nuncio to the United Kingdom has affirmed his support for women’s ordination.

On August 25, Archbishop Pablo Puente Buces, 88, announced during a Mass honoring a local saint that a letter would be sent to the pontiff on this subject the next day.

Miguel Ángel Revilla, 76, television personality and the president of the Spanish region of Cantabria, was present at the Mass. He reported the incident on Twitter:

“During the Mass of San Ginés, in Colindres, the celebrant was, as he has been for 30 years, an illustrious son of the town, the reverend Don Pablo Puente, archbishop and Vatican nuncio to the United Kingdom,” Revilla related.

“In the middle of the ceremony, [Puente] grabbed the mike and said, ‘Tomorrow a strong letter will be sent to His Holiness the Pope, urgently requesting that women be ordained as priests’,” the president continued.

He related that the archbishop then said: “We cannot tolerate this flagrant discrimination against women on the part of the Church.”

Puente wrote that he and “a goodly part” of a thousand others at Mass burst into applause. Afterward, the regional president went into the sacristy to embrace the elderly archbishop.

The archbishop first joined the Vatican diplomatic corps in 1962 and, after a long and distinguished career around the world, finished his service as the papal nuncio to the United Kingdom between 1997 and 2004. He was appointed an archbishop by St. John Paul II in 1980 and consecrated by Brazilian cardinal Agnelo Rossi (1913–1995).

Puente’s hopes for a female Catholic priesthood cannot be realized. On November 1, 2016, Pope Francis said: “On the ordination of women in the Catholic Church, the last word was clearly given by Saint John Paul II, and this remains.”

In 1994, St. John Paul II declared in an apostolic letter “that the Church has no authority whatsoever to confer priestly ordination on women and that this judgment is to be definitively held by all the Church's faithful.”

This short but firm apostolic letter is entitled Ordinatio Sacerdotalis. It was addressed to the bishops of the Catholic Church on the topic of “reserving priestly ordination to men alone.”

In this document, the saint observed that “[p]riestly ordination, which hands on the office entrusted by Christ to his Apostles of teaching, sanctifying and governing the faithful, has in the Catholic Church from the beginning always been reserved to men alone. This tradition has also been faithfully maintained by the Oriental Churches.”

St. John Paul II then quoted St. Paul VI, who explained to the Anglican Church in 1975 that women could not be ordained because of the witness of Scripture that Christ chose his apostles only from among men, because of the “constant practice of the Church,” and because of the Church’s “living teaching authority which has consistently held that the exclusion of women from the priesthood is in accordance with God’s plan for his Church.”

In 1977, St. Paul VI promulgated the “Address on the Role of Women in the Plan of Salvation,” which concludes that the Church “does not consider herself authorized to admit women to priestly ordination.”

In Mulieris Dignitatem, St. John Paul II wrote: “In calling only men as his Apostles, Christ acted in a completely free and sovereign manner. In doing so, he exercised the same freedom with which, in all his behavior, he emphasized the dignity and the vocation of women, without conforming to the prevailing customs and to the traditions sanctioned by the legislation of the time.”

In addition, the Polish pontiff underscored in Ordinatio Sacerdotalis that women are by no means “second class” just because the priesthood is reserved to men alone.

“The fact that the Blessed Virgin Mary, Mother of God and Mother of the Church, received neither the mission proper to the Apostles nor the ministerial priesthood clearly shows that the non-admission of women to priestly ordination cannot mean that women are of lesser dignity, nor can it be construed as discrimination against them,” he wrote.

“Rather, it is to be seen as the faithful observance of a plan to be ascribed to the wisdom of the Lord of the universe.”

St. John Paul II also repeated St. Paul VI’s remark that “[t]he greatest in the Kingdom of Heaven are not the ministers but the saints.”